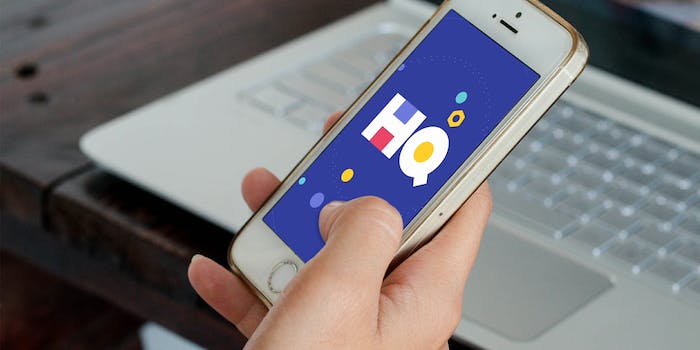 HQ Trivia being accused of not paying its winners

“Guys, I need your help. I won $20,000 on HQ Trivia on June 10 and still haven’t heard anything about payment. Sadly, I don’t think they’re going to pay,” Jacob wrote on Twitter, Monday. “Please RT to tell HQ they should honor their jackpots. If I’m wrong, I’ll happily delete this & give $100 to someone who RT’d!”

Nearly 1,500 users have already retweeted his plea for help. Dozens of players are echoing similar sentiments on Twitter and the game’s subreddit. Most are fighting for far smaller jackpots, though.

For those who never fell into the craze, HQ Trivia is a live trivia game wherein players are asked a series of questions and a cash prize is divided among however many manage to get all of them right. Since its heyday in 2017, the app has been plagued by reports of elaborate cheating schemes, according to Kotaku.

The Daily Dot reached out to both Jacob and HQ Trivia, and neither responded by publication deadline. However, Jacob did write the following in a follow-up tweet: “I am receiving a lot of interview requests. I would honestly rather just get paid and not have to do any of them. Please make this right HQ Trivia.”

I am receiving a lot of interview requests. I would honestly rather just get paid and not have to do any of them. Please make this right @hqtrivia

This is not the first controversy the app has faced. In March, an abrupt shift in hosts baffled fans. And then at the beginning of July, TechCrunch reported that the company laid off 20% of its staff.