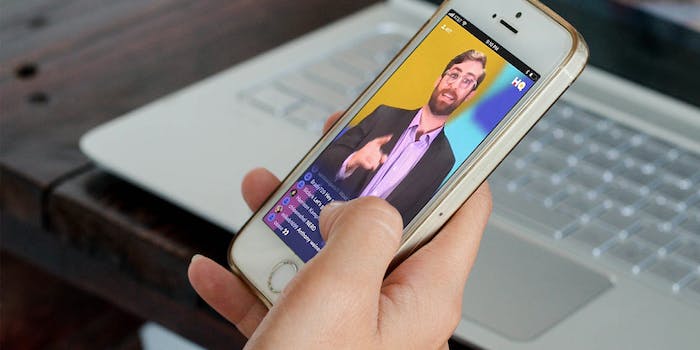 HQ is the next big thing.

HQ is the next big thing. I’m saying it now. And I don’t say it lightly.

It’s an iOS app that only goes live at 3pm and 9pm ET. Then, a game show host pops onto your screen, kicking off a live trivia broadcast where you can win actual money by answering rapid-fire, multiple-choice questions while giggling at the frenetic chatroom down below.

Get one wrong, and you’re out. Get all 12 correct, and you split the prize pool with fellow champs—often $150, occasionally $500.

After each question, you can see how many people got it right, and how many were eliminated. When a tough question blasts 50 competitors out of the airlock, you’re already fist pumping and trash talking your way to the next round. If you don’t make the cut, you can still watch the action to see who wins.

It’s a live, mobile adrenaline rush like nothing I’ve ever seen before—and it’s going to be huge.

Outside of enormous breaking news events, I don’t watch live video. I cut the cable cord a long ago, and all of my media consumption is on-demand, on my schedule, and in my control.

When Mark Zuckerberg espoused that live video is the next big thing and started paying media companies to make it, forcing it into your feeds and buying billboards (billboards!) to promote it, I laughed.Media made a lot of terrible “talking head” videos and nobody cared because we don’t open social media apps to see what’s on TV right now.

HQ is radical because it’s the first time I’ve ever felt compelled to “tune in” at a specific time to watch a live broadcast—of anything. And I don’t mean “maybe I’ll check out HQ today.” I mean “OMG it’s 2:59 where is my phone?!?!?“

Every app out there is trying to get users to habitually return, post, share, and like 20 times a day. But if you open HQ between shows, it doesn’t do anything. It just sits there… until 3pm. Then it’s GAME ON, BABY.

This powerful combination of social live broadcasting, old-school game show mechanics (a fun host, real prizes), sharing incentives (you get extra lives when friends sign up), and limited content (as opposed to the unlimited content on social video platforms) makes HQ the first truly innovative use of live video I’ve ever seen.

Real talk: It’s going to be the next Words With Friends, but with profound ramifications for the media and advertising industries.

Except only about 3,500 people are playing right now.

The app just launched on Aug. 26, according to co-founder Rus Yusupov. He, along with co-founder Colin Kroll, created Vine back in 2012. So they know a thing or two about mobile video.

“We’re just growing organically,” Yusupov tells the Daily Dot via email. “It feels right and all of us are definitely excited about how it’s been going.”

HQ is backed by a seed funding round from Lightspeed Venture Partners, and while investing in video apps is risky (Vine was shuttered last year), I think HQ is incredibly monetizable. Appointment viewing by a hyper-engaged audience (they are literally hanging on the host’s every word and tapping the screen) is ripe for advertising. “Today’s game is brought to you by Dunkin’ Donuts!” is an ad that you can’t skip or block, and that I’m happy to sit through if it means a bigger prize pool. Even better if it’s delivered by the host.

Ads and monetization are “not our focus right now,” Yusupov wrote. “Audience experience leads the way.” But I’ve already seen an ad at the top of one broadcast, and while it only reached about 3,000 people, it’s a model brands should be paying attention to.

HQ is only available on iOS right now, and Yusupov didn’t comment on plans for Android. But as the culture around this platform grows, it will need to evolve rapidly. For example, when 3,000 people play, the prize pool of $150 is often split among five to 10 winners. Getting 20 bucks for 10 minutes of trivia’s not bad. But if 15,000 people were playing, you might have 30 winners, which slashes your take-home pay significantly.

This could be solved by increasing the prizes globally, or segmenting the games into smaller groups—perhaps by location, time zone, or even skill level. “We’re focused on making an ideal experience for a U.S. audience, but we’re not excluding anyone,” Yusupov said when we asked him about these challenges. “Trivia for the whole world is tough!”

I’m excited to see where they take it.

“We love working in video, and we strive to make things that engage people with their family and friends,” Yusupov added. “HQ for us is a way to offer people a chance to have fun, be winners every day, and hopefully to share some interesting knowledge.”