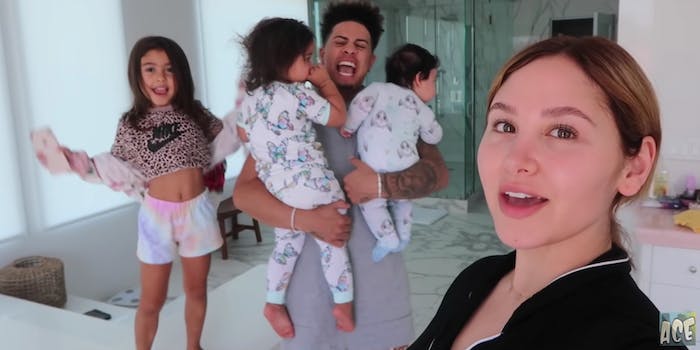 YouTube dad Austin McBroom berates his wife in the clip.

A popular YouTube family is facing some heat after a video uploaded to their channel accidentally included footage of the husband yelling at his wife in front of their kids.

The Ace Family, consisting of former college basketball player Austin McBroom, his wife Catherine Paiz, and their three kids, have been successfully documenting their family life on YouTube for the last several years. But a recent video meant to show a day in the life of Catherine accidentally revealed more than the couple intended.

The intro to the video in question shows all five family members saying hi to their viewers, followed by Austin noting that his hair looks messed up. Catherine turns the camera away and Austin protests.

“OK,” she relents, swinging the camera back to Austin, who is holding two of their kids.

Viewers believe the video was meant to start after that point, when the family restarts their introduction, but that an oversight accidentally left the bad take in instead.

Cursing certainly goes against the Ace Family’s family-oriented channel, but fans were more upset at how Austin seemed to berate his wife during the filming—and, in particular, that it happened in front of their young children.

“I know this man did not talk to her like that…” TikTok user @ceiliob wrote, sharing the clip to her own page.

Another person on Twitter noted that Catherine’s “eyes look so sad” throughout the video in question, and expressed their concern.

“i truly feel so bad for her & hope she’s ok,” wrote @princessjatz.

This is far from the first controversy the Ace Family has been wrapped up in. Austin stirred up concern earlier in 2020 after an interaction with his 4-year-old daughter that viewers felt was inappropriate.

And back in 2019, the former basketball player was accused of raping another YouTuber’s friend. Austin subsequently denied the allegations.

But as far as the most recent video is concerned, Catherine and Austin are presenting a united front, insinuating that cursing and yelling in front of their children is just “called marriage.”

The original video has since been deleted and an edited version has been uploaded in its place—one that presents only an image of the happy home Ace Family subscribers are used to seeing.