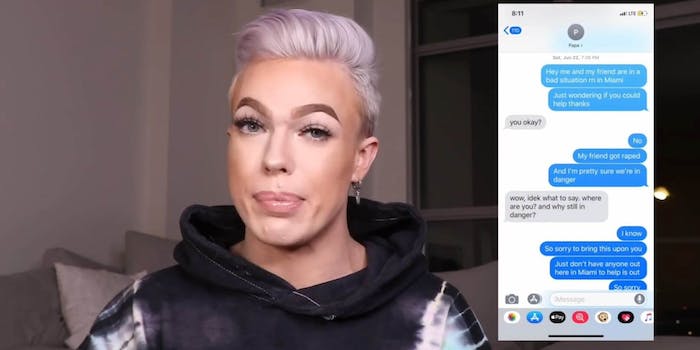 After a YouTube video by a friend of the alleged victim, Austin McBroom says he's being extorted.

Austin McBroom, the father of a popular YouTube family, has been accused by beauty vlogger Cole Carrigan of raping a woman. But in a fiery denial, McBroom—whose Ace Family channel has more than 17 million YouTube subscribers—said he’s the victim of extortion and slander and that he’s going to take legal action.

On Monday, Carrigan released a video, titled “The Truth About the Ace Family,” to his more than 150,000 subscribers in which he said a friend of his was raped by McBroom this summer. Carrigan—who said in July that he left Team 10, Jake Paul’s YouTube incubator group, because of bullying and homophobia—said he received a phone call from a female friend of his in June.

“She was hysterically crying,” Carrigan said. “I’ve never heard anyone feel so distraught in my life. I was so scared. She began to explain to me that she was in Miami with Austin McBroom and a bunch of other people, including his assistant, his dad, security guards, other girls. … Austin, the security guard, the father, and two other guys came into [her hotel] room. … My friend told me she repeatedly said no multiple times, over and over again to the point where she started crying, begging them to stop. That’s when they forced herself in her.”

Carrigan said in his video, which has already more than 3 million views, that he was uploading the vlog himself so the woman wouldn’t have to reveal her identity. Carrigan showed multiple screenshots and supposed proof that the McBroom and other members of his team had wooed the woman and one of her friends to Miami and then eventually raped her after a drinking session. One of those screenshots appeared to show blood on a hotel room bed sheet.

Carrigan said he encouraged the woman to speak to Keemstar, who hosts the popular YouTube Drama Alert show. At first, Keemstar was reportedly interested in creating a video. But Keemstar stopped responding to Carrigan, and after Carrigan texted him to find out how much McBroom had paid Keemstar to keep quiet, Keemstar said $500,000. A few hours later, Keemstar said he was being sarcastic, and on Tuesday, he was adamant that he was only joking about being paid off to ignore the story and not upload a video.

In his YouTube video, Carrigan talked to his supposed friend on the phone so she could tell her story, which included the accusation that McBroom’s dad wanted oral sex from her. In the video, Carrigan’s friend was using a voice manipulator to shield her identity.

“I don’t really need to provide anything else from you to see that Austin, his dad, his whole security team are pieces of shit,” Carrigan said. “These are not people that should be given all this crazy amount of success.”

But soon after Carrigan released his video, McBroom’s wife, Catherine Paiz, said the screenshots had been faked.

I don’t know who’s worse? The person who photoshops conversations OR the people who believe it? NEXT. Can’t break us, ever. 🤷‍♀️ pic.twitter.com/PyTqKwI3ux

A woman who was supposedly with the alleged victim and McBroom family, drinking in Miami that night, then posted (and deleted) a statement on Instagram, where she has more than 200,000 followers, in which she wrote that Carrigan had texted her and said they could split a $100,000 payoff from McBroom to not tell the story. She said that McBroom “did not rape me or anyone.”

On Tuesday morning, McBroom responded to the story, saying he was the “victim of extortion, defamation, and slander. … My family and I are dealing with this matter privately and taking legal action. Bullying, extortion, slander, and defamation of [character] is something I will not stand for and I can promise that justice will be served.”

I hope you really all understand what’s going on here… pic.twitter.com/rQ2HEOBFnW

Carrigan hasn’t responded since McBroom’s tweet, but he did respond to Paiz’s accusation of the fake screenshots, writing, “Wait is this bitch delusional? how does this have anything to do with RAPE? u can’t photoshop blood onto a bed? don’t be a fucking idiot.”