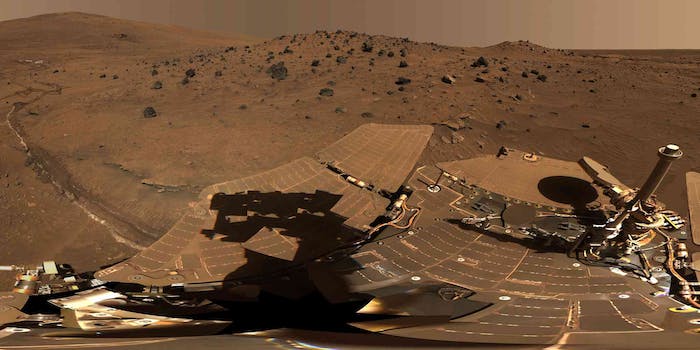 More than 78,000 have already thrown their names in the ring for the Mars One reality show.

In the classic Simpsons episode “Deep Space Homer,” viewers get an inside glimpse of NASA that’s, well, a little cartoonish.

To justify a plot that puts buffoonish Simpson patriarch Homer in space, the show’s writers concocted a version of NASA that was supremely concerned with ratings. After the latest shuttle launch fails to beat Home Improvement and Married With Children in the Nielsen race, NASA administrators show up at Moe’s Tavern to pluck a couple of “average Joes” out of obscurity to become the nation’s next astronauts.

Nearly 20 years have passed since that episode first aired, and suddenly the premise seems a whole lot less absurd.

After only two weeks (and with plenty of time before the Aug. 31 deadline), more than 78,000 “average Joes” have already signed up for a spot aboard a proposed colonization mission to Mars that also just happens to be a reality show. The Mars One project, which claims it will send a crew of pioneers on a one-way trip to the red planet by 2023, is using the Internet to democratize the astronaut selection process.

“Applicants we have received come from a very wide range of personalities, professions and ages,” said Norbert Kraft, Mars One’s chief medical officer. “This is significant because what we are looking for is not restricted to a particular background.”

The flight candidates are indeed diverse. That’s obvious enough from the video applications posted on the Mars One site. They include everyone from students to engineers to theme park employees (who say their job makes them accustomed to thrills). Gone are the early days of space travel, chronicled in The Right Stuff, when the government culled through the crème de la crème of military pilots. The doors have been flung open to everyone who wants to throw their space helmet in the ring.

It is the American Idol of space travel. And as is the case with that show, the first round of auditions bring out the delusional and the jokers. There are candidates like Kitty Kane, 23, who said she wants to go to Mars because “she likes eating food out of pouches.” Others seem to think attitude is all it takes.

“Why would I like to go to Mars? Well that’s the cowboy side of me,” said Benjamin Payne, a 20-year-old security guard. 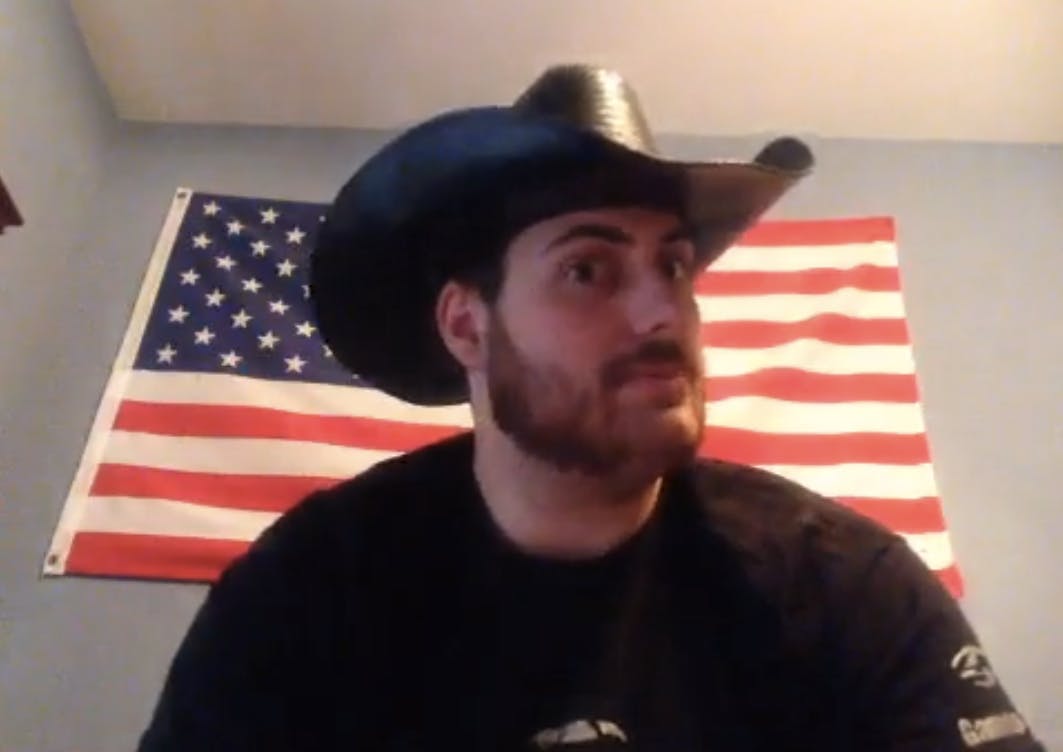 Screen grab via Mars One

But as one pores over the applications, it becomes clear that those sort of videos are the minority. Most of the applications are surprisingly sincere. Their videos are not like the narcissistic, gimmicky video essays born out of The Real World and carried on by its progeny; many of the candidates have a refreshing earnestness about them. They don’t care about the criticism Mars One has received, and they see this as their legitimate chance to take the next giant leap for mankind.

“A lot of people online, I’ve noticed, have been rather negative, calling Mars One a scam, or foolish for even trying,” said Jason Canard, an Australian applicant. “But frankly, of all the efforts to go to Mars, Mars One appears to have done the most work towards that goal.”

It’s true, many experts have criticized the program, with its reality TV component and sensationalized candidate search. But Canard and many of his fellow applicants are dreamers, hypnotized by the romanticism of interplanetary travel. Infatuation with manned space flight (or even just fictionalized shows about space flight) from an early age is a recurring theme among many of the applicants.

“I was very obsessed with space travel when I was young,” Canard told The Daily Dot. “When I became old enough to understand that the only astronauts that got to go to space lived in a spacefaring country (USA, Russia, China, etc.) that obsession directed itself towards fiction rather than reality. But now with all the private space industry popping up, all that desire to personally go into space and visit other planets has come back with a vengeance.”

This drive for exploration seems to come with a very sober sense of what a one-way trip to Mars actually entails.

Mars One’s stated plan is to start sending unmanned supply ships with critical infrastructure to Mars by 2016. In the meantime, training of Mars colonists will begin on Earth in an elimination-style reality TV contest where viewers get to help decide the actual crew. The first crew of four settlers would be launched in 2023. If their mission is successful, follow-up crews would be sent on a regular basis every two years when the Earth and Mars are in optimal alignment.

But the major caveat for prospective colonists to consider is that, no matter what, this is a one-way mission. They would leave all their loved ones behind to live out the rest of their lives with a small group of people on a planet that can be as far away as 249 million miles from Earth. Many of the more serious applicants appear to have considered this eventuality and have ultimately decided they still want to take voyage.

“The most common question I get is, how can you even consider leaving the ocean, fresh air, us, forever?” said Jeremy Goodwin, 40, of Canada. “What I’ve been telling them is, ‘We find meaning in our lives in different ways.'”

Like many others, Goodwin believes that being among the first to voyage to a new planet would surpass any possible experience that could be had here on Earth. In fact, many seem motivated by the idea that they could leave a lasting legacy that goes beyond nationality and generation, that could ripple out across mankind.

“I have my mom, dad, sisters, and friends, and I love them and I have a good job here,” says applicant Mubashshir, 27, of India. “But when I have an open and significant option to contribute to the whole living kingdom, I would definitely not mind compromising my life on Earth for such a great mission. Of course I am going to have my remaining life on Mars.”

Testimonies like this make it clear that these are not your average reality show applicants. These are idealistic dreamers with a macrocosmic view on humanity. Countless application essays are delivered in language that is self-aware of the speaker’s place in the evolutionary ladder. The sacrifice of a social life on Earth is viewed as a necessity for continued survival of the human race.

But is Mars One really the vehicle for tackling such an audacious mission, or are they preying upon the naivete of hopeful scientific dreamers?

Mars One is a nonprofit organization based out of the Netherlands. They rightly claim that a Mars trip is feasible in the foreseeable future with “existing technology.” But Amy Shira Teitel of Physics Focus says there is a big difference between technology that could theoretically take humans to Mars and technology that is “flight tested” for such a journey.

“The team behind the mission claims that the mission is feasible with existing hardware. That may be true, but ‘existing’ does not necessarily mean flight ready, let alone suitable for a manned mission. Only the Russian Soyuz is currently able to take humans into space, and that’s not a spacecraft equipped to land on Mars. And the landing is another issue. Mars One says it will use retrorocket (rockets that fire to slow the spacecraft for a soft touchdown) and no parachute to land its crew on Mars. That’s a method that’s never been done. NASA’s Viking landers use retrorockets, but they also used a parachute in the early stage of their descent and weighed far less than a manned spacecraft. I can only imagine how much the fuel for a powered descent would weigh for a spacecraft not taking advantage of a parachute-assisted descent.”

There is also plenty of concern about the way Mars One is going about its search. Any healthy individuals over the age of 18 are eligible to make the trip. Applications are being accepted in 11 languages, but fluent English will be required of anyone who actually makes the journey. And in the first round of applications, candidates are being asked not about their scientific expertise, but rather their sense of humor. The idea is that candidates are being screened as colonists, not scientists. But with a staggering amount of deep space infrastructure to be maintained millions of miles away from any other humans, technical and scientific expertise will obviously be critical.

Mars One did not return The Daily Dot’s request for comment on any of these concerns.

Still, it’s unlikely that the practical concerns of a one-way mission to Mars would dissuade applicants — at least for now, while the mission still seems a bit like science fiction. After all, for the average Joes who dream of life beyond our planet, this is a fantasy come true.

“That I’m now actually applying to be a crew member on a human expedition to Mars is my wildest fantasy come true,” said applicant Erica Meszaros. “I know, pretty tame fantasies, huh?”