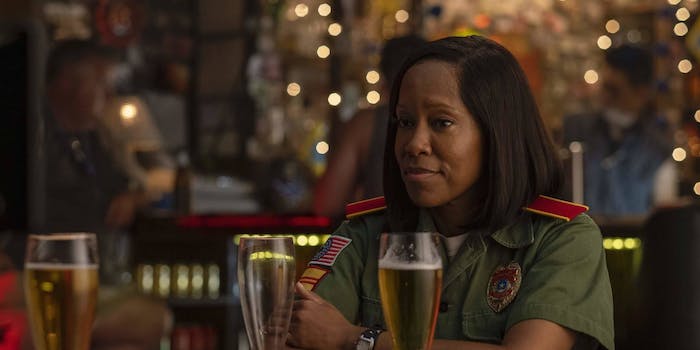 Episode 8’s punny title, “A God Walks into Abar,” nudges us into the right mindset for a more comedic tone than usual. Using Angela and Dr. Manhattan’s first date as a framing device, it drops in and out of important moments in their relationship, mirroring his non-linear experience of time. Angela Abar may meet him for the first time in a Vietnam bar in 2009, but Dr. Manhattan—formerly Jon Osterman, soon to be Cal Abar—is simultaneously experiencing his whole life at once, detached from the laws of time and space.

Last week, I had serious doubts about the twist that Dr. Manhattan was Angela’s husband all along, his superhuman memories locked away beneath a mild-mannered human identity. I still find it kind of hard to swallow that she fell in love with one guy (Dr. Manhattan) and then essentially lived the next ten years with another one (Cal), but this episode did at least sell me on their courtship. And let’s be real, it was just really fun to watch. This week gave Regina King a chance to be funny, playing off the intrinsic comedy of Dr. Manhattan interacting with normal humans. Not to mention the subtext that once again, Dr. Manhattan’s lofty intellect hides a powerful aura of fuckboy energy, pursuing yet another much-younger woman with his godlike powers.

Their first date is a tricky balancing act: Dr. Manhattan is a blue dude in a mask who approaches a strange woman in a bar, drinking alone on the anniversary of her parents’ murder. Regina King and the writers (Jeff Jensen and Damon Lindelof) have to make us believe that she’d stick around instead of walking out after five seconds, because we know Angela Abar doesn’t suffer fools gladly. So, Dr. Manhattan needs to be weird enough to pique Angela’s interest yet harmless enough to be non-threatening. His success hinges on the central theme of the episode, and indeed their entire 10-year relationship: Inevitability.

Dr. Manhattan’s chat-up line is certainly unique. Over the course of their first meeting, he explains that he’s already in love with her, that they’ll get married and stay together for ten years, and that their relationship ends in tragedy. Angela is understandably skeptical, but we know from the start that he’ll persuade her. We flash forward to see Angela pick out his “Cal Abar” body (a corpse in a Vietnam morgue), followed by their mutual plan to wipe his Dr. Manhattan memories so he can become human again, helped by a device invented by Adrian Veidt. It’s clear that for Angela, much of the appeal is the inevitability itself. In a life shaped by tragedy and uncertainty, it’s comforting for Angela to know she will fall in love with Dr. Manhattan/Cal Abar, and he will stay with her for ten years, even if she knows something bad will happen at the end. And it’s human nature for her to secretly believe she can prevent that tragic ending, even up to the last moment when, in the present day, the newly-awakened Dr. Manhattan gets blown up by Seventh Kavalry agents.

Like his father’s fascination with clockwork mechanisms, Dr. Manhattan understands how the universe fits together. He knows his own destiny in the same way he knows his own past. Similarly, Angela’s whole storyline is founded on a looping paradox. Shortly before he became Cal Abar, Dr. Manhattan visited Will Reeves and delivered a question from Angela, ten years in the future: How did Reeves know that Judd Crawford was a member of Cyclops? But back in 2009, Reeves hadn’t even heard of Crawford. He finds out about him from this question, meaning that Angela arguably kickstarted the mystery she’s been trying to solve all season. The chicken and the egg.

Elsewhere in 2009, we learn how Adrian Veidt wound up in his bizarre prison. Fittingly for Watchmen, the real explanation has very little to do with justice, unless it’s justice of the poetic variety. 25 years after he dropped that squid monster on Manhattan, the aging Ozymandias is frustrated with how the world turned out. People are still building nuclear weapons and he’s still sitting alone in his lair. When Dr. Manhattan shows up wanting help to become Cal Abar, Veidt is at the end of his rope. He tearfully jumps at the chance to live on Dr. Manhattan’s self-made paradise on Jupiter’s moon Europa, currently populated by the proto versions of Mr. Phillips and Ms. Crookshanks. This peculiar Adam and Eve were modeled off an English couple Jon Osterman met as a child. A clone army of obedient servants seems like a perfect fit for Ozymandias, but after ten years it’s become a prison. By 2019, he’s desperate to return home, convinced with typical self-absorption that Earth will want him back. In reality no one really cares, and Lady Trieu has supplanted him as the manipulative genius du jour.

Between Dr. Manhattan, the Angela Abar/Will Reeves paradox, and whatever’s happening with Lady Trieu’s clock, the finale seems likely to play around with the idea of predestination. Angela has lived through the last decade with very specific expectations for her future, and when unexpected things happen, they turn out to be part of her destiny all along. In an abstract sense, the same goes for the show’s political themes, which explore how America’s chickens may come home to roost. Cycles of violence and racism repeat over the generations, and trauma causes people to act in predictable (often self-destructive) ways. So while we don’t know what will happen next week, it’s likely to fit neatly into what we’ve seen already, once we have the benefit of hindsight.

Watchmen has been analyzed to death over the past couple of months, both for its political content and its puzzle-box storytelling. It wants to provoke intellectual satisfaction—or, if you’re being cynical, it wants the audience to feel smart. Week by week, it sets up clever foreshadowing that pays off in revelatory and unexpected ways. If you’re interested in historical references or callbacks to the comic, Watchmen has Easter eggs up the wazoo. So while the finale may leave some unanswered questions, Watchmen is ultimately a show for people who like to see their mysteries solved. And personally, I prefer dramas with more narrative ambiguity, like The OA or Black Sails. It’s purely a taste thing, and it often explains why we can watch a show and recognize that it’s great television, but still not be completely engaged. Episode 8 makes it clear that on a fundamental level, everything in Watchmen is intended to make sense. There’s plenty of room for interpretation and debate on its moral and political questions, but the plot appears to be heading toward a specific end, predetermined by fate.

Update Dec. 9, 8am CT: This article was updated to reflect the correct title of episode 8.