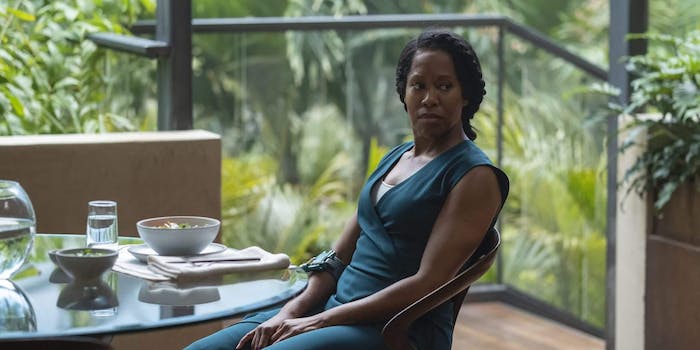 This week’s ‘Watchmen’ is kind of a head-scratcher

That... was a very unexpected plot twist.

As is often the case on TV, we follow a hard-hitting episode with a rather silly one. By Watchmen standards, anyway. After absorbing her grandfather’s memories of becoming Hooded Justice in 1940s New York, Angela Abar is in the care of Lady Trieu, whose pharmaceutical company created the memory drug Nostalgia. To rid herself of Will Reeves’ memories, Angela must eject them through a tube leading to a suitable “host,” and reconnect with her own identity. Conveniently, this leads to some Angela-centric flashback scenes. Oh, and the tube turns out to be attached to a sedated elephant, but we don’t really know what that means yet. The main message is that Watchmen will cheerfully make some wild creative choices, and the elephant pales in comparison to what happens in the episode’s final scene.

Angela grew up in Vietnam, where her parents settled after the country became a U.S. State. As per the episode’s documentary-style intro, this ties into a turning point in the comic, when Dr. Manhattan used his powers to win the Vietnam War for America. This took place in 1971, and by the time of Angela’s first flashback, Vietnam is already heavily influenced by American colonialism, including a ton of blue-hued Dr. Manhattan merchandise. She comes across as a pretty normal kid, buying a video of a B-movie called Sister Night when her parents are killed in a suicide bombing by Vietnamese freedom fighters.

This kind of tragic origin story is exactly what we’d expect for Angela, sowing the seeds for her vigilante persona. Her traumatic childhood leads her to become quiet and closed off, with the kind of singleminded goals that define the more serious masked crime-fighters in Watchmen.

After Angela emerges from her regurgitated memories, Lady Trieu reveals a pair of very abrupt plot twists. The first is that Dr. Manhattan isn’t on Mars, and therefore Trieu Industries’ Dr. Manhattan phone booths are just empty receptacles—a clever idea for data collection in a world without the internet. The second revelation is much more bizarre: Dr. Manhattan is actually on Earth, and he’s disguised as a human. And apparently the Seventh Kavalry are planning to capture him and steal his superpowers. Somehow.

The unveiling of Dr. Manhattan’s human identity is so wild that it basically obliterates the previous 50 minutes of the episode. Apparently he was Cal Abar all along, Angela’s husband. And Cal doesn’t even know it. He believes that he and Angela fell in love in Vietnam, and then he completely lost his memory in a car crash, leading them to start a new life together. Of course, the real reason he has no earlier memories is that Dr. Manhattan built Cal Abar from scratch, creating a perfect husband to live a peaceful human life with Angela.

This whole concept is pretty hard to swallow. The most plausible part is the idea of Dr. Manhattan hooking up with another young, emotionally damaged woman, which fits his M.O. with Silk Spectre (aka Laurie Blake.) But aside from that… what the hell? We don’t actually know how he and Angela met, but we do know they fell in love, and that love was serious enough for Dr. Manhattan to erase all his own memories and start a new life with her. But that means Angela fell in love with Dr. Manhattan… and then embarked on a marriage with “Cal Abar,” a man with a totally different personality to Dr. Manhattan—or indeed Jon Osterman, his original human identity in the 1950s. Cal is a fake person, and their whole relationship is based on a lie. Angela knew that at some point she’d have to reactivate his original personality by literally murdering her own husband. This also puts a very weird twist on their choice to adopt children, because Angela was fully aware that the kids would lose a second set of parents if Cal’s secret identity ever came out.

In many ways, this episode feels like a set-up for the final two. Characters spent a lot of time explaining stuff to each other—including the fact that Lady Trieu’s “daughter” is actually a clone of her mom, being fed her memories through a Nostalgia drip. We don’t know what she and Will Reeves are planning to do with the Millennium Clock, but we do know the Seventh Kavalry’s endgame, which Lady Trieu seems weirdly unbothered about. We have to assume that she’s already dealt with them, or she’s manipulating Angela into unmasking Dr. Manhattan so she can use his powers for something else. I’m reasonably confident that the final episodes will tie together the main themes of law enforcement and racism in a satisfying way, even if some of the wider worldbuilding doesn’t fully hold together. However, I’m still stuck on the whole Dr. Manhattan thing. We obviously don’t know much context yet, so I’m open to being convinced. But compared to the sensitive and thematically satisfying reintroduction of Hooded Justice last week, it’s hard to look at the Cal/Dr. Manhattan situation and have any reaction other than: “Uh… what?”

Of course, our final plot strand here is Adrian Veidt, whose role this week was as entertaining as ever. Trapped in a courtroom drama that his clone servants take very seriously, he’s charged with attempting to escape his imprisonment. With characteristic absurdity, the final “jury” is a herd of piglets that the masked Game Warden lets into the hall, proclaiming Veidt guilty. Since Veidt is openly derisive of the whole proceeding, he’s either lost the will to live, or is fully aware that the court case means nothing. At this point, I’m kind of hoping that Veidt doesn’t escape, and that his delightfully silly subplot remains detached from the main story. It’s actually better to keep him as this futile, ridiculous, self-centered figure, puncturing the idea that he’s a genius with any real political importance.