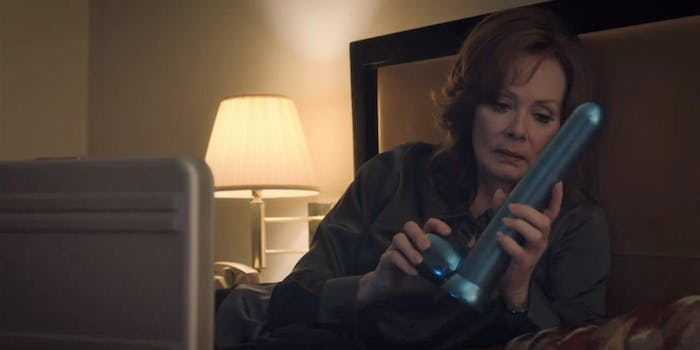 As the Slate interview points out, you can already buy real Dr. Manhattan dildos, which basically just look like blue dicks. There are even companies like Bad Dragon that specialize in sex toys inspired by sci-fi/fantasy creatures, and none of them look like rigid, perfectly smooth, foot-long tubes. This particular design is also kind of mystifying as a Watchmen comic callback, because we all know what Dr. Manhattan’s dong looks like, and it ain’t that. He’s more of a Michaelangelo’s David kind of guy, and his sex scenes with Laurie Blake weren’t very phallo-centric. The whole point was that he used his superpowers to please her, once going too far by generating multiple copies of his body and freaking her out.

“We definitely talked about kind of what it means to her and why she gets off this way. And I think on some level she probably doesn’t even really understand it herself. I think that she is somebody who has really complicated feelings about this era in her personal history. I mean, keep in mind, she was 16 when she got involved with Dr. Manhattan, and that relationship occupied her entire adult life until she turned 30 and sort of ran off with Dan Dreiberg and Manhattan left earth. So I think it’s probably a relationship that she still has unresolved feelings about.”

Laurie gets a rough deal in the comic. As the main female character, she’s primarily defined by her relationships with men: her lovers Dr. Manhattan and Nite Owl, and her father the Comedian, who raped her mother. In the 2009 movie, she’s the cliché of a sexualized Zack Snyder heroine in a PVC catsuit. The HBO show offers a satisfyingly unexpected epilogue to her story, reintroducing her as a cynical and darkly amusing authority figure. Her taste in sex toys, however, is still pretty debatable.