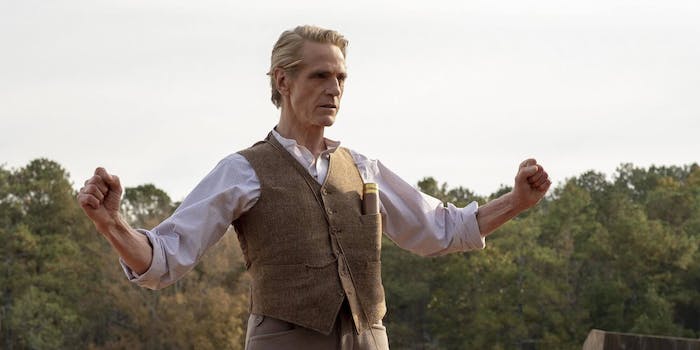 From Nite Owl's hidden legacy to the band 'Sons of Pale Horse,' HBO's 'Watchmen' is full of Easter eggs.

As a sequel to the most over-analyzed comic in history, HBO’s Watchmen is predictably full of Easter eggs. Some are callbacks to the original canon, some are sneaky little worldbuilding details, and others will remain a mystery until later episodes (hopefully) explain what’s up. A list of every Easter egg would probably fill a book, so we’ve narrowed it down to the most satisfying examples—the clever details that will deepen your appreciation of the show once you understand what they mean.

So far, the only crossover characters between the comic and the show are Laurie Blake (aka Silk Spectre) and Adrian Veidt (aka Ozymandias), with Dr. Manhattan lurking offscreen on Mars. However, there are still plenty of other comic-TV connections, like the Seventh Kavalry’s Rorschach masks. Nite Owl is a particularly interesting example because he’s actually still alive, although according to Peteypedia (HBO’s site of supplementary files), he’s currently in federal custody. He and Laurie Blake were arrested for illegal vigilantism in 1995, but while Blake joined the FBI, he stayed in jail.

Nite Owl (specifically the second Nite Owl, Daniel Dreiberg) was a central character in the comic and is roughly analogous to Blue Beetle or Batman: a vigilante who relies on self-made gadgets. His signature vehicle is a flying ship with windows resembling an owl’s eyes, and we see something very similar in the show’s first episode. (Thanks to Peteypedia, we now know that Dreiberg’s company Merlincorp directly supplies the police with Owlships.) Later we see Angela Abar wearing a familiar pair of night-vision goggles, and there are a couple of background references to Nite Owl’s impact on pop culture, like Angela drinking from an owl mug, or one of her kids wearing an owl costume.

Pale Horse was a (fictional) death metal band in the 1980s, beloved by a youth subculture known as “knot tops,” roughly akin to skinheads. They’re a recurring background detail in the comic until their final concert in Madison Square Garden, where they live up to their apocalyptic name by dying in Adrian Veidt’s alien squid attack. HBO’s Watchmen pays tribute to them with a 1990s band called Sons of Pale Horse, who became popular among the Rorschach crowd. In fact, when you order the first volume of the show’s soundtrack by Trent Reznor and Atticus Ross, it arrives in the form of a Sons of the Pale Horse re-release called “The Book of Rorschach.”

In the vinyl LP edition, the album’s liner notes reveal a whole backstory for the band and its cultural impact. Apparently, their music was intended to satirize the idea of worshipping toxic vigilantes like the conspiracy-obsessed Rorschach, and the band was shocked to learn their audience was full of people like the Seventh Kavalry. In other words, Sons of Pale Horse are a direct reference to the way characters like Rorschach attract an unwanted fanbase in real life. The band’s in-universe role even extends to a fake review published in Revolver magazine, which incidentally reveals that “hero rock” became a popular subgenre in the Watchmen timeline, with David Bowie dressing as the Silk Spectre, and Iron Maiden releasing a vigilante concept album.

Much like how Sons of Pale Horse was inspired by Nine Inch Nails (ie. the real band who recorded that fake album), Watchmen is littered with real-world references highlighting differences and similarities with our own timeline. President Robert Redford is the most obvious example, but there are plenty of others with more subtle roles. Ezra Klein (in real life a political journalist who co-founded Vox) is a Redford administration spokesman. Historian Henry Louis Gates Jr. has an onscreen cameo as the Treasury Secretary, acting as the face of Redford’s reparations campaign for survivors of racist violence. And Elvis Presley is apparently still alive, resurfacing in a Hanoi nightclub in the ’90s, tying into Watchmen’s ongoing fascination with conspiracy theories.

Episode 3 uses a long and bizarre phone call as a framing device, cutting between the main action and Laurie Blake having a one-sided conversation with Dr. Manhattan on Mars. She tells a series of elaborate and rather unpleasant jokes about god, mortality, and superheroes, while Dr. Manhattan (if he’s even listening) fails to reply. The scene works perfectly well on its own, but it makes a little more sense if you know two facts about Laurie’s backstory: her father was the vigilante known as the Comedian, and (as we learn from Peteypedia) Laurie later adopted the superhero moniker Comedienne, after retiring the Silk Spectre pseudonym she inherited from her mother.

That last part is a rather puzzling choice from Watchmen’s writers because it’s unclear why Laurie chose to follow in her father’s footsteps—both by taking his surname and by continuing his legacy as the Comedian. Edward Blake raped Laurie’s mother when they were both in the Minutemen superhero team, and in later years we see him shoot a pregnant woman, and generally behave like a colossal asshole who represents everything bad about vigilantism and American imperial power. He’s a cross between the Punisher and the more conservative iterations of Captain America, with a sadistic streak and no moral code. So, why did Laurie decide to acknowledge him in later life, even adopting the name Blake?

The New Frontiersman is a far-right tabloid in the comic, prone to printing conspiracy theories and stirring up trouble. At the end of the comic, we see Rorschach’s journal in their office, leaving things open for his notes to be published, revealing the truth of what happened with Adrian Veidt and the vigilante murders Rorschach was investigating. HBO’s Watchmen makes it clear that the journal was indeed published, which is why characters like the Seventh Kavalry are so dedicated to Rorschach’s memory.

And as we see during a scene at a newspaper stand, the New Frontiersman is still going strong. Peteypedia reveals that the paper is owned by Roger Ailes, who once attempted to sue Veidt Enterprises for “harassing” him because he published Rorschach’s journals. (In public, Veidt was politely dismissive of Rorschach’s accusations, and most people were satisfied to believe Veidt’s words over the ramblings of a dead weirdo in a mask.)

The Keene Act was the first law outlawing masked vigilantism in 1977, and HBO’s Watchmen continues its legacy with Joe Keene Jr., an up-and-coming GOP senator whose father introduced the original Keene Act.

Joe Jr. is the man behind the Defence of Police Act (DOPA), making Tulsa cops wear masks and hide their identities. On the surface, this might feel like a weird reversal of his father’s ideology, until you realize that both policies are designed to benefit the police. The Keene Act was introduced in response to police strikes over vigilantes “taking their jobs,” while DOPA (which supposedly protects police from reprisals) gives the Tulsa PD an alarming amount of freedom to be as violent and aggressive as they want. The Keene family also has a history with the KKK, which we examined in detail here.

There are plenty of recurring motifs in Watchmen, including smiley faces, clocks, eggs, and… pirates. In Watchmen’s timeline, superhero media is limited to things like Sons of Pale Horse and that corny-looking American Hero Story TV show. Superheroes are real, so they’re not really suitable for the kind of blockbuster escapist entertainment we enjoy from Marvel and DC. Instead, people in the Watchmen universe seem to prefer swashbuckling stories about pirates and cowboys, harking back to the pre-superhero days of American comics.

The comic’s best-known example is the serialized pirate horror story Tales of the Black Freighter, which the show references on a couple of occasions: a Black Freighter Inn in Tulsa, and the egg farmer in episode 3 reading the novel Fogdancing by Max Shea, who wrote Tales of the Black Freighter. We also see Angela Abar’s kids playing dress-up as a pirate and an owl, and one of Angela’s coworkers uses the pseudonym Pirate Jenny, named after a song from The Threepenny Opera. Episode 1’s Bass Reeves cameo illustrates where the superhero/swashbuckler timelines diverged, depicting him as the kind of Zorro-esque masked vigilante who would become real and commonplace in later years.