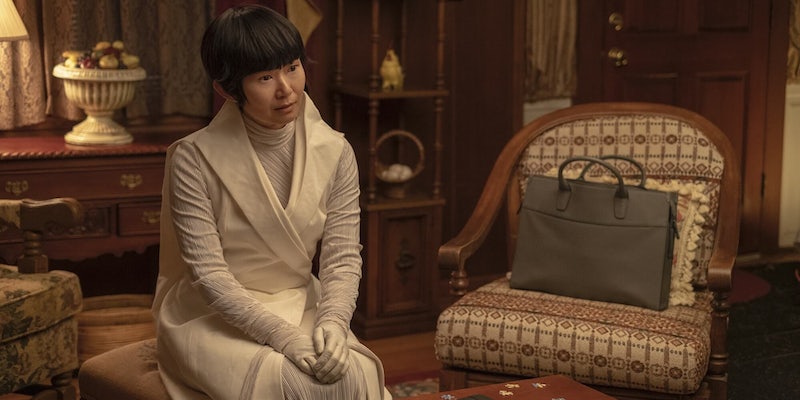 We spoke to the show's costume designer about Lady Trieu's distinctive look.

There aren’t really any superheroes in HBO’s Watchmen. Both in terms of a moral definition of heroism, and in the literal sense that no one has superpowers. Costumes and masks are the only things that separate people like Sister Night from the civilian population, so when a supervillain turns up, it makes sense that her fashion choices also stand out. And “supervillain” probably is the best way to describe Lady Trieu (Hong Chau), who made a dramatic entrance in the first scenes of episode 4, with an offer that two average Oklahomans can’t possibly refuse.

Lady Trieu and Trieu Industries have cropped up in the background a few times already, seeding the idea of a mega-corporation in the mold of Iron Man’s Stark Industries or Batman’s Wayne Enterprises. Or perhaps more relevantly, Lex Luthor’s LuthorCorp. Her first scene opens with a middle-aged couple living in a farmhouse in Oklahoma, unexpectedly interrupted by enigmatic trillionaire Lady Trieu, who is building a colossal monument called the Millennium Clock nearby. She gives them an ultimatum: Agree to leave their house in the next three minutes, and she’ll give them $5 million and the baby they’ve always wanted. In fact, she’s already grown that baby from their DNA, and if they don’t give up the house right now, their biological son will never know his parents.

Fertility and babies are a noticeable theme this week, with lots of egg imagery, parent/child scenes, and a delightfully grotesque sequence revealing where Adrian Veidt’s creepy servants come from: They grow as fetuses at the bottom of a lake, and then he gestates them to adulthood in a steampunk laboratory device. Lady Trieu—who actually bought Veidt’s company after he “died—owns a massive pharmaceutical empire, which is why she’s able to produce this baby for an infertile couple. Her medical background is also apparent in her costume, which combines a bold silhouette with a white color-scheme, reminiscent of a lab coat. You’ll also notice that she wears white gloves at all times.

“Her character is very very wealthy and has access to many resources, she can have clothes from anywhere,” costume designer Meghan Kasperlik told the Daily Dot. “There was a thought early on that her colors were white and green. She’s predominantly in white, with accents of green.”

Watchmen’s costumes all share the same philosophy: They’re realistically accessible for the characters who wear them. Instead of having the high-tech, reinforced catsuits worn by DC and Marvel superheroes, crime-fighters like Sister Night wear costumes they clearly designed and made themselves. One Tulsa detective, Red Scare, literally just wears a tracksuit and balaclava. Lady Trieu is rich enough to wear whatever she wants, but instead of just dressing in glamorous designer gear, she’s adopted a distinctive signature style, calling back to the way comic book characters often follow a specific shape and color palette.

“Sometimes she looks so elegant and sometimes you’re like wow, that’s a really interesting silhouette,” said Kasperlik, who started out in the fashion industry before working in film and TV. “I love unconventional materials, so I sourced a lot of upholstery fabrics. I was out buying something for another character and saw another jacket on the rack. I fell in love with the amazing fabric and I turned it inside out. The reverse was actually white, and it was embossed silk. So I bought three Chico’s jackets and turned them into a costume she wears in a later episode.”

Kasperlik’s main designer inspirations here were Rick Owens, threeasfour, and Kasperlik’s favorite designer, Iris van Herpen. (“I think she does so many creative, innovative things, she really thinks outside the box.”) All three are known for their futuristic, structurally ambitious designs, often in black or white. Iris van Herpen feels particularly relevant to what we’ve seen of Lady Trieu so far, tying into the flowing architecture of the Millennium Clock.

While the first three episodes focused on local politics in Tulsa, Lady Trieu expands the story to a potentially worldwide scope. Her Millennium Clock, whatever it is, must surely be more than just a clock. Without revealing her deeper motives, this episode dropped a ton of unanswered questions about her role. Why is her daughter having dreams that sound like flashbacks to the Vietnam War? What’s up with the mysterious alliance between Lady Trieu and Will Reeves, who is joining her in some unnamed conspiracy? When Lady Trieu describes Will’s pill bottle (currently in Angela Abar’s custody) as “passive-aggressive exposition,” what does she mean? And is she the one keeping Adrian Veidt locked inside that weird prison habitat?

The episode’s title is a quote from Chinua Achebe’s novel Things Fall Apart: “If You Don’t Like My Story, Write Your Own.” It almost feels like a response to the arguments around popular media products like Watchmen, where recent adaptations have shifted away from the white, male-centric source material. With examples of racebent casting like Fantastic Four’s Johnny Storm, or Marvel relaunching Sam Wilson as Captain America, the backlash often demands that creators “write their own characters” instead of rebooting ones that already exist. But of course, when franchises like Star Wars do start to include more women and people of color, the racist and sexist backlash just returns from a different angle. That’s why Watchmen’s audience score is so low on Rotten Tomatoes, despite very positive reviews.

HBO’s Watchmen takes the themes of the comic and explores a new story with a direct emphasis on race and racism. This episode focused on three women, two of whom are women of color—and none of them are depicted as sex objects for the male gaze. They’re also not presented as role models. Like the original Watchmen characters, they’re morally ambiguous, and arguably not heroic at all. Whatever she’s up to, Lady Trieu is trying to change the world without the knowledge or consent of ordinary people. Meanwhile, Angela Abar and Laurie Blake are more down-to-earth, but they’re still law enforcement officers with no qualms about police brutality. That title could be read as a message from Watchmen’s original creators to the TV show, or from the show’s creators to the audience… or a specific comment on Lady Trieu, a Vietnamese-American woman who overtook Adrian Veidt’s role as the ambitious leader of a 21st-century empire.