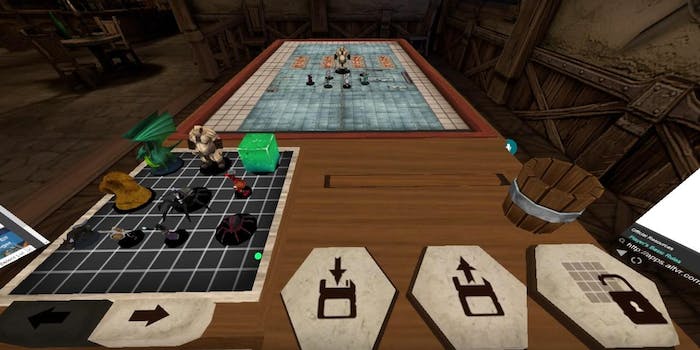 Now you can meet up for Dungeons & Dragons in virtual reality

One major hurdle in organizing a Dungeons & Dragons session is getting everyone in the same place. Whether your friends live across town or across the country, it can be hard to get everyone to meet up.

But now there’s a new way to gather without having to leave the comfort of your own home.

AltspaceVR, a small virtual reality company, developed the idea to create a digital space for RPG meetups. Basically, each player is represented by an avatar and can interact with the game via rolling dice and verbal communication with the other players. The Dungeon Master can also affect certain aspects of the game, including moving tiles around on the board and creating ambient music and sound to set the tone, according to Gizmodo.

Like other high-end D&D enhancements, this one runs at a cost. The app works with Oculus Rift DK2, which is currently sold out on Oculus’ website and running for $1,000 new on Amazon. You have to be sure everyone in your campaign is willing to invest in the equipment, but it could help unite serious players from all over the globe. Once VR headsets start to roll out to the public in earnest next year, this technology could get more comfortably within reach.