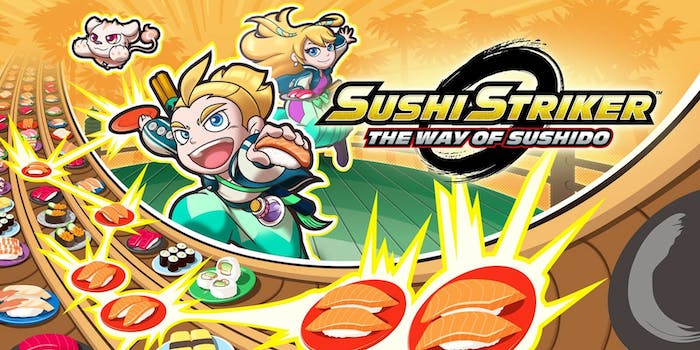 Nintendo’s Sushi Striker is a feast for the eyes

In a world lacking food, families must strive together to master combat as a way to fend off starvation. Though the setup for Nintendo’s upcoming action-puzzle RPG, Sushi Striker: The Way of Sushido is grim, the game itself is anything but. Sushi Striker walks a fine line between being explicitly aimed at kids and offering more dedicated players a traditional challenge. At a recent preview event, after two hours of gameplay, I came away with a much better idea of what this new IP hopes to offer.

Nintendo has crafted another colorful, creature-filled world in line with expectations set by the Pokemon and Yo-Kai Watch franchises. Anime-inspired cutscenes lay out the story of this war-torn world, as well as fully voiced characters. The setup involves the world running out of fish, leaving traditional fishing towns in ruins and allowing the rise of a tyrannical Empire to hoard resources.

It’s here that we meet Musashi hunting for a midday snack.

Players will be able to select their hero’s gender, to a purely cosmetic end. Musashi is a plucky, hopeful protagonist in line with standard RPG trappings. After being chased off by some local bullies, they step into a larger world by running into a roaming professor and imperial forces. The hero then joins forces with a Sushi Sprite, in hopes of mastering the art of sushido.

Almost everything about the presentation of the story is absurd, as the ghostly sprite tells the youngster to “eat my sushi” and join their powers. Said powers involve conjuring special sushi used to duel enemy combatants and introduce the puzzle mechanics. Sushi Striker’s vibrant aesthetic persists across these pre-rendered scenes, dialogue, and into gameplay.

Combat drops the player onto a bustling conveyor belt, matching plates of sushi to create a color-coded stack to swipe across the screen at the enemy. The pace of the moving pieces is frenetic, and players only have seven seconds to connect as many of the same color as they can find. 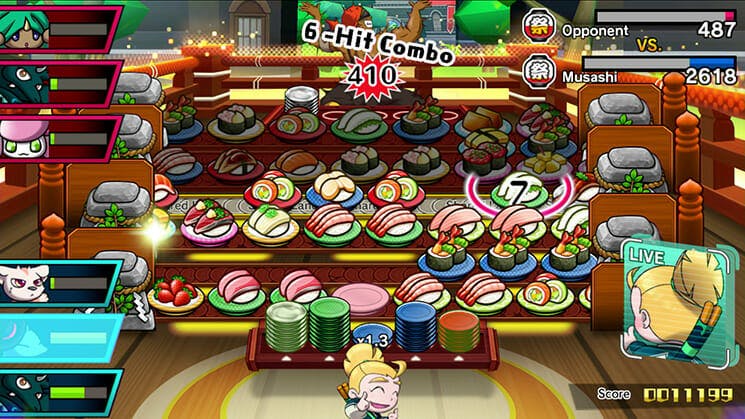 Pairing plates can be done with an analog stick or touch controls (either with a finger on the Switch or using the 3DS’ stylus). You need to draw a straight line across the three moving lanes and press a button to confirm the stack when you’ve finished. As the plates build up, they’ll automatically fly across to damage the opponent. Getting a grip on the precise timing takes a few stages, and new elements are introduced at a quick clip.

Each sushi sprite has a special power to influence the flow of a match. One grants a boost that changes the colors of all plates to match, another freezes the foe’s lanes in place. Players can build a team of three sprites for battle, and it will be important to make sure their powers are balanced. Individual sprites can level up, and even “evolve” into more intimidating forms. I get the sense that traveling the world and befriending various sushi sprites will add another layer of strategy to the overall experience.

Every encounter feels new. There are several stats to keep track of, and even setting your favorite flavor of sushi can grant bonuses. For example, swiping together more plates of salmon adds to your overall health, as the game tells you salmon is good for the heart.

Going hands-on with Sushi Striker put the game on my radar—I’d written it off as a juvenile title. Where the Saturday-morning vibe of the story runs thin after a while, the deeply fresh action of combat manages to be quick, layered, and extremely satisfying.

Sushi Striker: The Way of Sushido is available for Nintendo 3DS and Nintendo Switch on June 8.