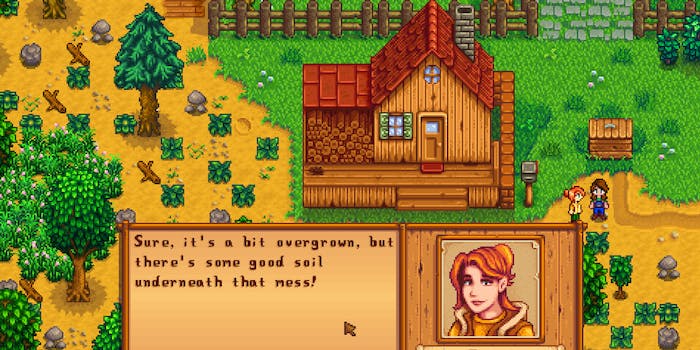 You’ll soon be able to play Stardew Valley with friends

No more relying on those cows and chickens for company.

The tall cornfields and shimmering beaches of farm life simulator Stardew Valley are gaining some new townsfolk very soon, according to a post by developer Eric Barone.

The long-awaited multiplayer update, which will add four-player co-op, is expected to arrive in “about a month,” Barone said Tuesday on Twitter. The multiplayer mode will work through either an online connection or a local LAN line for more literal couch potato farming.

Update on Stardew Valley multiplayer: still making good progress on fixing bugs, if all goes well it should be ready in about a month

The free multiplayer update will come first to the game’s PC version, followed by an update for the Nintendo Switch version, then both PlayStation 4 and Xbox One arriving after.

Released back in 2016, Stardew Valley charmed players with the quaint story of an aimless office worker inheriting their late grandfather’s farm. It then opened up to allow players to figure out their own path toward a pleasant life full of farming and family.

Stardew Valley has boasted a variety of popular mods since its initial release on the PC (including a Pokémon reskin, anime avatars, and even one that filled the valley with giant mushrooms) but this will be the first major overhaul of the game’s format for consoles.

If there’s one thing that medically ill-advised summer on a real-life onion farm taught me, it’s that farming is more fun when you’ve got friends or loved ones to toil alongside with. Happy harvest, fellow farmers.