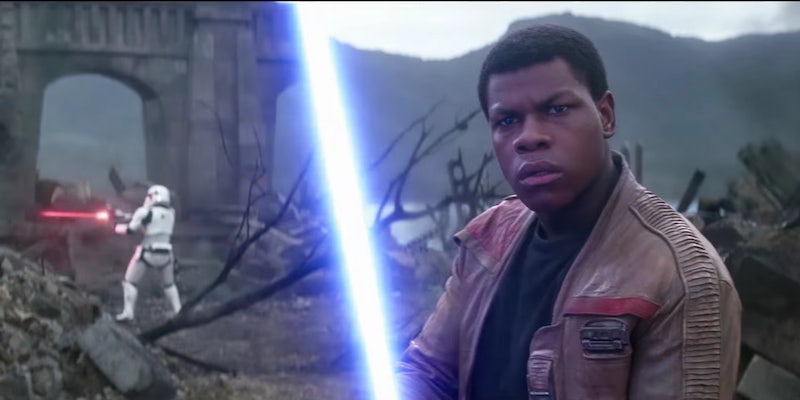 Star Wars: The Force Awakens introduces us to Rey, the Force-sensitive scavenger from Jakku with mysterious origins. She defies the odds stacked against her, helps destroy a First Order superweapon, and eventually finds Luke Skywalker and (hopefully) begins her Jedi training.

Rey is unquestionably the hero of The Force Awakens. But is she the only new lead character who is strong with the Force?

While Poe Dameron grew up in close proximity to a Force-sensitive tree on Yavin 4, a new fan theory posits that Finn—the third member of the new Star Wars OT3— is the Force-sensitive hero. The idea arose almost as soon as The Force Awakens was released, but as people go to their third or fourth screenings and are able to pay even closer attention to detail, the list of evidence from fans is only growing.

We first learned that Finn (John Boyega) would be wielding a blue lightsaber (later revealed to be Luke’s) in August 2015, and much of the promotional material featured Finn preparing to fight either Kylo Ren or stormtroopers on Takodana. Some fans thought that showcasing Finn with the lightsaber so much was a bait-and-switch for the eventual reveal that Rey was Force-sensitive, and the film later proved them right.

Maz Kanata gave Finn the lightsaber after Rey refused to take it; he began using it at Maz’s insistence only after he couldn’t find a blaster. But when Kylo knocked him out, Rey used the Force to grab it and finally take on her destiny.

While it’s too soon to tell whether fans are onto something, or whether the belief that Finn is Force-sensitive is the new “everyone is a secret Targaryen” or “everyone is a child of an original Star Wars hero,” there’s definitely more to Finn than meets the eye.

Life as a First Order stormtrooper is pretty bleak. You’re taken from your family, given a number instead of name, and trained and brainwashed from childhood to obey the First Order without question. If you disobey orders or refuse to fully participate—like Finn not firing a shot on Jakku—you may be sent to “reconditioning.”

We’re told in Before the Awakening, Greg Rucka’s prequel short-story collection, that Finn, known then as FN-2187, was the leader of his squadron, but that he was an outsider even among his own stormtroopers. Captain Phasma even criticized him for trying to pull up the weakest member of his team. At the beginning of The Force Awakens, when Finn was commanded to kill civilians on Jakku, everything he knew about his life in the First Order seemed to fall apart, and he began to question the entire organization.

As far as we know, Finn is the first stormtrooper to break free of the First Order’s mind control. Is it possible that other forces were at work?

Toward the middle of The Force Awakens, Finn was ready to abandon his new friends to hide from the First Order. Maz said that in Finn she saw “the eyes of a man who wants to run,” but she nevertheless pointed him to several smugglers who would take him to the Outer Rim. And Finn was all for it.

At least, until he saw the First Order use Starkiller Base to destroy the capital system of the New Republic.

One redditor pointed out that, as Finn is about to board the smugglers’ ship, he hears screaming. Although we’re led to believe that those screams are from nearby Takodana denizens who see the destruction in space, we don’t see anyone else outside of Maz’s castle—and Finn’s companions don’t turn around. The movie then cuts to Hosnian Prime, focusing particularly on Resistance Commander Korr Sella, General Leia Organa’s envoy to the New Republic, showing her and others watching helplessly as their planet is destroyed. The screams sound eerily similar to what Finn heard.

While there aren’t any shots to prove or disprove the theory that Finn heard the screams coming from the Hosnian system, the redditor believes that it could be a callback to the last time a planet was destroyed by evil forces. Or just really clever editing.

Either way, the ensuing fight against the First Order leads Maz to tell Finn that she sees something else in his eyes, according to The Force Awakens novelization, in which Maz played a larger role. In the book, she tells Finn that she sees “the eyes of a warrior.”

He catches Kylo Ren’s attention even before he defects

After the First Order burns Lor San Tekka’s village on Jakku, Finn—who didn’t fire a shot at the villagers—caught the eye of Kylo Ren and found himself unable to move. Finn believed that Kylo knew that he didn’t fire—and that he had his doubts about the First Order—and he considered himself a dead man, according to The Force Awakens novelization. The moment only lasts for a second before Finn is able to move again.

When Finn and Poe subsequently escape Kylo’s Star Destroyer in a TIE fighter, Kylo knows almost instantly that Finn is the one who helped the Resistance pilot escape. And even though we don’t know if Kylo has never seen Finn’s face before, he knows that Finn is FN-2187 when they face each other in the snowy forest on Starkiller Base.

Kylo may be injured from Chewbacca’s bowcaster, but Finn is still able to hold his own against a powerful Force user. That might not be a coincidence.

Han Solo, who isn’t Force-sensitive, wields Luke’s lightsaber in The Empire Strikes Back to cut open a Tauntaun. But between Han, whom Maz has known for years, and Finn, a man she just met, she gives the lightsaber to Finn after Rey flees. And when Finn frets about needing a weapon for the oncoming battle, she tells him that he already has one, gesturing to the lightsaber in his hand.

Maz has a strong connection to the Force. We know she senses it in Rey. Does she also sense it in Finn?

Force sensitivity or not, Finn proves himself capable of wielding the lightsaber; he even holds his own against Kylo and manages to injure him before he’s struck down. Some believe that he wouldn’t have lasted as long as he did if he weren’t Force-sensitive.

As the original Star Wars trilogy demonstrates, being Force-sensitive doesn’t necessarily mean becoming a Jedi. Leia is strong in the Force like her brother Luke, but unlike him, she never became a Jedi. Yet her power didn’t diminish. She felt a disturbance in the Force when her husband died.

Finn is already a strong ally to Rey and our other heroes, but he might have more to offer the forces of light than membership in the Resistance.