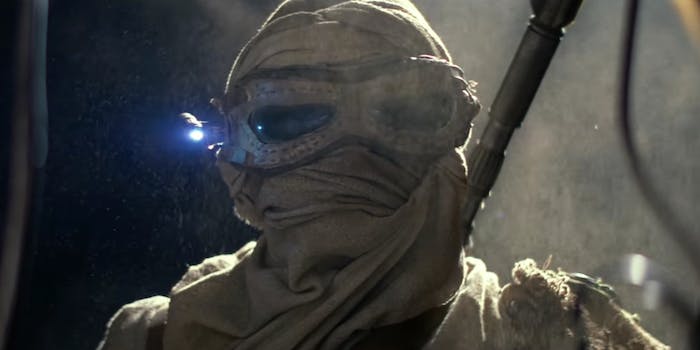 It only took one day after the release of Star Wars: The Force Awakens for some fans to take issue with the film’s main protagonist.

Audiences overall loved Rey, the Force-strong scavenger from Jakku played by Daisy Ridley, and she’s already inspiring both new and older Star Wars fans alike. She’s a multi-dimensional female character: she’s skilled at piloting, talented with the Force, and she can handle herself with a bow-staff, a blaster, and a lightsaber. And as we saw at the end of the film, her journey is just beginning.

But for some people, like screenwriter Max Landis, that was a problem. Landis didn’t like the film in part because Rey, he said, is too perfect and unrealistic.

In fandom a Mary Sue is, more or less, a thinly veiled attempt by the author to insert him- or herself into the story. Mary Sues are perfect at everything they do, everybody likes them, and everybody falls head over heels for them. They’re literally perfect except for one flaw—and it’s usually something minor like clumsiness. This can also apply to a male character (sometimes referred to as Gary Stu), but more often than not the term Mary Sue negatively refers to a female character.

Landis’s comments clearly hit a nerve. Some fans wanted him and people who shared his opinion to acknowledge the double standard: that male Mary Sues don’t get nearly as much scrutiny as female characters who bear the trope name. One such male character, according to Landis’s critics, started out as a farm boy on a desert planet swept up in a Force-fueled adventure just like Rey.

If you want to hate Rey, at least be honest about it: you hate that she's a Mary Sue because she's a WOMAN. It's cool. Just be real about it

Waiiiiiit. Max Landis was the source of the "Rey is a Mary Sue" critique?

If you're calling Rey a Mary Sue, here's what I have to say to you. pic.twitter.com/aL31cWqyWS

But while plenty of people spoke out against Landis’s categorization of Rey, some fans certainly agree with him.

.@Uptomyknees Even tho I enjoyed TFA I think ur #marysue comment is applicable. Ur problems w/ Rey didnt ruin the character/film for me tho.

Even Guillermo del Toro weighed in on the question of whether Rey is a Mary Sue. He described that reaction as a “sour, self-appointed, evangelical superiority.”

A character's "Mary/Gary Sue-ness" is a sliding scale that enables a tone/genre narrative choice. Not a quality impediment.

@somebadideas I agree completely. There is a sour, self-appointed, evangelical superiority to this that remains troubling.

@somebadideas Sort of like that proverbial drunk at a party that insists on telling you "your truth" because he love you. Nerdgasm Sheriff.

@somebadideas Perfect, imperfect, savage, the word of storytelling needs to tackle more female characters that are not collateral to a man.

According to the Mary Sue’s Sam Maggs, the biggest Mary Sue in fiction isn’t a female character at all. It’s a character we’ve known for decades through a series of novels and movies: James Bond. And although there are plenty of male Mary Sues in fiction, we rarely ever hear about them—and there’s a reason for that.

It could just as easily have been Batman.

Or Edward Cullen. Or Legolas. Or Captain Kirk. Or Mikael Blomkvist. Or Aragorn. Or Lestat. Or Wesley Crusher. Or Ender Wiggin. But, oddly enough, male characters with these Mary Sue-esque traits never seem to get called out; we don’t even have an accepted name for them. Gary Stu? Marty Stu? It hardly matters, because no one ever uses it. For some reason, it’s totally okay for male characters in fiction to be perfect, strong, over-sexed paragons of righteousness, but as soon as it’s a lady – nope, we want no part of it. Bad writing. No room for growth. Annoying. Unrealistic.

In some ways, Rey does fit the mold of a Mary Sue. She’s been waiting on Jakku for her family to return for 14 years; she was abandoned when she was 5 and is 19 when we meet her. She has some major abandonment issues. But she can fly a ship—something she learned from a flight simulator she found while scavenging, according to the book Before the Awakening—and she can fight with a staff, a necessary skill for surviving in a lawless place like Jakku. Her mechanical skills are excellent, because, if an item is in working condition, the Jakku junk-dealer Unkar Plutt will pay more for it—and that means she’ll get more food portions for it. Rey is resourceful, and most of this training occurs offscreen, well before we meet her.

Because she’s strong with the Force, she’s able to prevent Kylo Ren from probing her mind, mind-trick a stormtrooper into freeing her from her shackles, and defeat the relatively untrained Ren in a lightsaber duel. All of these actions are raw, untrained attempts. She will now—presumably—begin Jedi training with Luke Skywalker.

Rey has also not yet been explicitly romantically linked to Finn, Poe Dameron, or any other character, although there are more than a few hints at a relationship with Finn.

But she could easily also fit into the Gifted One trope, in which she excels at what she does and is strong with the Force. Luke fit this trope, and few people complained about that.

Ever since Landis declared that Rey was a Mary Sue, he’s been fielding plenty of backlash from fans and critics. He shot down fans’ retorts that Luke Skywalker was a Mary Sue while naming some male Mary Sues.

He also made a six-minute vlog explaining his views because it “bothered me to be called a sexist.” Before launching into the rant, he emphasized that “nothing you say will change my opinion.”

Although reviews are largely positive, The Force Awakens—and Rey, for that matter—will likely divide fans for some time as they analyze and rewatch it. But for many, Rey may be the main reason to tune into Episode VIII.