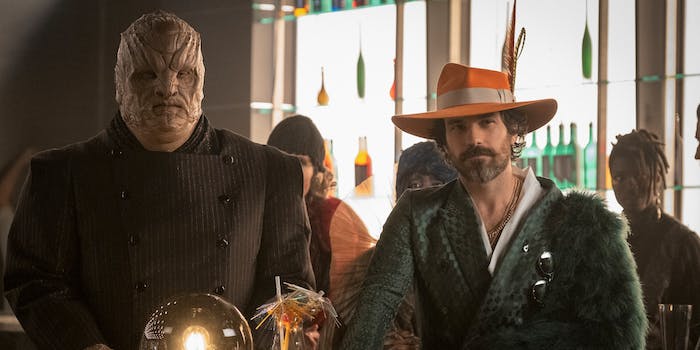 'Voyager' star Seven of Nine returns for a glamorous undercover mission that feels more like 'Star Wars' than 'Star Trek.'

The plan involves Rios, Picard, and Elnor pretending to be criminal fixers, exchanging their “prisoner” Seven of Nine for the missing AI engineer Bruce Maddox, who was kidnapped by someone best described as Betazoid Lady Gaga. She has a side business collecting and dissecting ex-Borgs, making Seven an enticing prospect. This all adds up to a thoroughly entertaining Ocean’s Eleven interlude where Patrick Stewart gets to pretend to be a bad actor (love it!) and Santiago Cabrera carries off a deeply absurd outfit because he’s Just That Handsome. Naturally, the plan goes wrong within minutes, which is unfortunate because I would’ve preferred more hijinks before we got to the serious stuff.

Frivolous nonsense is one of the core tenets of Star Trek, and it’s a relief to see Picard embrace it. Still, I wish they’d leant into it even more. While Picard isn’t as grim as the first season of Discovery, both shows seem more comfortable with drama than with comedy. Elnor is the most obvious missed opportunity: a naive sweetheart who literally cannot lie, trapped in a situation where everyone is being ostentatiously deceptive. We get a couple of fun lines from him, but it should’ve been more. The episode also opened with an aggressively gory surgical torture scene, as if the show’s creators were trying to balance out the lighthearted tone later on.

Miraculously, Picard and Rios don’t blow their own cover. Instead, it’s Seven who throws a spanner in the works. She turns out to have unfinished business with Bruce Maddox’s glamorous gangster kidnapper. Jay (Necar Zadegan) has killed numerous ex-borgs over the years, including Seven’s adoptive son Icheb, the character we saw being dissected in the pre-credits scene. (Some Trek fans will be happy to note that Picard recast Icheb, whose original actor is a rather controversial figure.) Their confrontation reveals that Jay and Seven knew each other before Icheb’s death, strongly implying that they’re ex-lovers—a detail that’s both exciting and frustrating in context.

Star Trek: Picard hasn’t featured any explicitly LGBTQ characters yet, which is really a surprise considering Star Trek’s history. TNG aired a trans-coded episode back in 1992, Deep Space Nine featured one of the first lesbian kisses on American TV, and Discovery includes a gay couple in the main cast. It feels weird to see Seven embroiled in a sexually charged standoff where this woman refers to her as “the one that got away,” while the nature of their relationship remains technically ambiguous.

Long-running franchises rarely allow legacy characters to come out, and Seven would be an ideal choice if they did it properly. During Voyager’s run, her popularity was influenced by her arguably exploitative image as a sex symbol, and her story concluded with a very unpopular romance. Fans were more likely to ship Seven (and her eventual boyfriend Chakotay) with Captain Janeway, and Janeway/Seven was one of the most popular femslash pairings of the nineties. They’re basically the Xena and Gabrielle of Star Trek, laying the groundwork for Seven to have a female love-interest in Picard.

I suspect the end of the episode is why the show’s creators chickened out. Whatever Jay and Seven’s relationship was before, Seven now wants her dead. After Picard’s crew rescue Bruce Maddox, Seven borrows a couple of phasers and returns to the nightclub, where she assassinates Jay. So if the show made Seven more obviously queer, they’d also be delivering a scenario where she murders her ex-girlfriend in the same episode. Discovery was criticized for playing into the “bury your gays” trope, so I can see why Picard chose not to define this relationship. Personally, though, I thought it was a fumbled opportunity. In a show that’s making some bold moves elsewhere, they’re oddly conservative about queer representation.

Despite all the attention paid to Discovery’s gay characters, Star Trek is still behind the curve compared to something like Legends of Tomorrow or even Doctor Who. Stamets and Culber’s relationship just wasn’t as complex as the material given Discovery’s straight couples, to the extent that in season 1, I found them less compelling than the subtextual queer content in DS9. Seven feels like the other side of the coin: a character who actually does get a satisfying role, but whose queerness is shrouded in ambiguity. Unless Seven appears in later episodes, her relationship with Jay will remain in the same “are they or aren’t they?” territory as Garak and Bashir in the ’90s.

Hopefully, Seven will return, not just to clarify her sexuality but because this episode introduced such an intriguing view of her life. Star Trek usually envisions a prosperous retirement for its main characters, but Seven’s grim epilogue makes sense. Unlike her Voyager crewmates, she didn’t have a home in the Alpha Quadrant. Her ex-Borg status makes her an outsider in Picard’s political landscape, and her experiences with Voyager’s crew – the bad boys of the Trek franchise – wouldn’t prepare her for the bureaucracy of the Federation. It’s also not a huge leap to imagine the ruthless Captain Janeway siding with Starfleet’s party line during the Romulan disaster. You can see why Seven would strike out on her own, joining the vigilante group known as the Fenris Rangers. (I suspect this idea was the brainchild of Discovery and Picard writer Kirsten Beyer, who is credited with this episode, and previously authored a slew of Voyager tie-in novels.)

Much of this episode felt like tantalizing glimpses of material that didn’t get quite enough screentime. Seven and Jay’s relationship. Rios and Picard’s silly undercover personas. The Fenris Rangers, vainly attempting to keep the peace after the Romulan Neutral Zone collapsed. Like Rios, this new version of Seven is a Star Wars-like character who clashes with Picard’s worldview. She’s had a hard life, and Starfleet’s failures are partly to blame.

Once Seven leaves the ship, the episode closes with another cliffhanger, although this one left me cold. Following his rescue, Bruce Maddox tells Picard that Soji is on the Borg Cube, meaning our two storylines will soon meet up. Picard then leaves Maddox alone with Dr. Jurati, who we now know was Maddox’s girlfriend as well as his academic protégé. With Maddox helpless on a medical bed, Jurati straight-up murders him! It’s a wild twist for such a harmless-seeming character, and while she’s truly upset about killing him, she also seems to think it’s a necessary evil. “I wish I didn’t know what I know,” she sobs. “I wish they hadn’t shown me.” We have to assume that “they” are the Zhat Vash, the Romulan secret society who hate synthetic life, and are guarding a momentous secret. Is she planning to kill Soji as well? As someone who doesn’t really care about teasers for some Big Reveal, this question is less compelling to me than Santiago Cabrera’s beautiful hat, the true highlight of the episode.