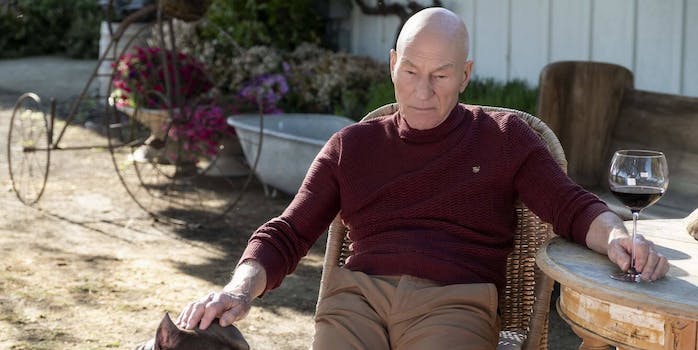 Thoughtful and emotionally compelling, this long-awaited revival is as brilliant as we hoped.

Star Trek: Picard launches with the best series premiere in the history of the franchise. It’s also the boldest, avoiding the typical format of introducing a ship and its crew. We know that a new crew will arrive eventually: they appear in the trailer. But for now we meet the elderly Admiral Picard alone, retired to the family vineyard in France. Of course, narrative convention dictates that he’ll be dragged out of retirement for One Last Mission, which arrives in the form of a distressed young woman named Dahj (Isa Briones). Echoing some of the later Shatner/Nimoy movies, our aging hero is at loggerheads with his former bosses at Starfleet, teaming up with an ensemble cast of new allies—all of whom are instant stars.

RELEASE DATE: 1/23/2020
CREATORS: Kirsten Beyer, Akiva Goldsman, Michael Chabon, and Alex Kurtzman.
STREAMING: CBS All Access
20 years after ‘Star Trek: Nemesis,’ Picard is now a retired admiral, disillusioned with Starfleet. But when a mysterious young woman comes to him for help, he embarks on an unexpected new mission involving the Romulans and the Borg.

Even in this era of nostalgia-fueled revivals, it’s hard to believe Picard is back. Unlike Star Wars, whose films followed the same basic formula for decades, you could never launch a show like The Next Generation in 2020. Airing 26 episodes per season, it mostly consisted of standalone stories with limited longterm character development. Budgets were tight, and the tone varied wildly from absurd comedy to intense, visually static moral debates. The Next Generation may be iconic, but it couldn’t possibly return in the same form.

So, how do you embrace TNG’s legacy in a way that feels appropriate for 2020, without becoming the dreaded gritty reboot? Star Trek: Discovery had some trouble with this very issue, skewing too grim in its first season, and cramming dozens of twists into what should’ve been a simpler show. Picard solves the problem by offering a clear, streamlined concept from the start. It is a mature, serialized story in the vein of contemporary prestige dramas, but it also feels like a natural progression from Picard’s earlier years, building on familiar themes. The Borg and the Romulans play key roles, in a political thriller with deep emotional resonance for Picard—and for longtime Star Trek fans.

After two decades of Star Trek aiming its gaze into the past (Enterprise; Discovery; the J.J. Abrams movies), Picard is a welcome step into the future. Set 20 years after the final TNG film, Nemesis, we see a smattering of technological advancement that nerdier fans will enjoy, but the most important changes are political. Jean-Luc Picard retired 14 years ago, and his departure was not a happy one. He left because Starfleet botched the rescue effort when the planet Romulus was destroyed, prioritizing human lives elsewhere. The Romulans might have been an old enemy, but Picard didn’t see it as an either/or decision.

These events shaped Federation politics for years to come—and completely disillusioned Admiral Picard, who retreated to his family chateau. He lives there with his dog and two Romulan refugees, who play a scolding-yet-supportive role much like Batman’s butler Alfred, albeit with a 92-year-old Bruce Wayne. Bickering and cracking jokes that belie their tragic backstory, Zhaban (Jamie McShane) and Laris (Orla Brady) run Picard’s household while he putters around and broods about the past.

Picard’s trailers emphasize his new crew—some of whom take several episodes to appear —but Zhaban and Laris are crucial characters as well. They’re our first introduction to the show’s revamped view of Romulans, an alien race that was first introduced in the 1960s, but never felt as three-dimensional as the Vulcans, Klingons, or Bajorans. Generally cast in villain roles, we know they’re related to the Vulcans, they have a secretive, Soviet-esque society, and they tend toward gothic fashion and histrionic melodrama. Complex cultural worldbuilding was rarely a factor, but that’s about to change.

Cold wars between the Romulans and Federation are a long-running theme, with TNG highlighting Picard’s diplomatic role in episodes like Unification, when Ambassador Spock tried to bring the Vulcans and Romulans together. Decades later, Picard was understandably horrified by the idea of abandoning Romulan civilians to die.

Patrick Stewart describes Picard as a reaction to the era of Trump and Brexit, and that’s already clear from the three episodes I watched for this review. Picard is a lone voice of compassion in a supposedly-inclusive culture that turned its back on refugees. Starfleet’s empathy and intellectual curiosity have shriveled up under a cloud of fear and bigotry, leaving him behind as a relic of a bygone era.

This may all sound like a downer, but the show actually feels much less dark than Discovery, which took almost a full season to find that defining Star Trek optimism. Picard is still very much Picard: a moral touchstone and a loyal friend, willing to risk anything to help those in need. Naturally, Patrick Stewart is wonderful. He’s one of the greatest actors of his generation, and he’s made Picard shine through far less impressive material in the past. This new role is roughly analogous to his depiction of Professor Xavier in Logan: a return to the twilight years of a beloved hero, in a more sophisticated story than before. Both Stewart and the show’s writers put serious thought into where Picard would be at this point in his life, and how to include other classic characters without resorting to cheap cameos.

Rather than having old friends beam in for fanservice purposes, characters return because they’re actually relevant to the story. Data-centric dream sequences are crucial because his death had such an impact on Picard, and we know we’ll meet Riker, Troi, and Seven of Nine in later episodes. They’re organic choices for a story involving Starfleet, Romulans, and the Borg. Everyone is introduced in a way that should be accessible to new viewers, including one character who feels like we should know her already, but is actually a new face. The intriguing Raffi Musiker (Michelle Hurd) is an ally from Picard’s later years in Starfleet, with a prickly and more volatile dynamic than the cozy friendships we saw among the Enterprise crew.

It’s honestly incredible how much I love love love the new cast from their very first scenes. Supporting character development was a real problem on Discovery (a show I generally enjoyed!) because so much time was spent on plot and action, relegating casual relationship moments to brief snapshots. Picard is more emotional, giving each new character an intense, distinctive introduction. Dahj is the most important, although her role is too spoilery to discuss here. On paper, she sounds like a bit of a Joss Whedon knockoff: a vulnerable young woman with dangerous secrets, who turns to Picard for sanctuary. Her true role is more complicated, played with marvelous sensitivity and charisma by newcomer Isa Briones. The show is full of brilliant female characters, in fact—including Dahj, Laris, Raffi, and scientist Agnes Jurati (Alison Pill), along with a whole host of others in a diverse range of secondary roles. This shouldn’t still feel remarkable, but it does.

I’ll dig deeper in my upcoming recaps, but for now I’ll just add that Picard’s casting director deserves a fruit basket for recruiting Harry Treadaway to play the Romulan agent Narek. Treadaway is an English stage and screen actor who you may know as Frankenstein in Penny Dreadful, and in Picard, he’s playing… basically the ultimate Romulan. He’s sexy and troubled! He’s wry and mysterious! He has dastardly hidden motives! His costumes rely heavily on angular black leather! I already came into this show ready to stan every Romulan, but it’s doubly satisfying to see Picard’s creators embrace variety among these characters. Picard’s Romulan friends are warm and domestic, exploring a more personal side to an otherwise enigmatic culture. Meanwhile, Narek leans into the theatrical espionage stuff that made old-school Romulans so fun. He’s also a fantastic romantic lead; a rare figure in Star Trek canon.

In a franchise packed to the gills with beautiful friendships, Star Trek has only managed a handful of decent romances over the years. Odo and Kira. Tom Paris and B’Elanna Torres. Tyler and Michael Burnham. Subtextually, Kirk and Spock. They’re far outnumbered by nonsensical and/or sexist love stories, including zillions of ridiculous single-episode arcs where (for instance) Janeway fell in love with a hologram or Dr. Crusher banged a ghost. Largely written and directed by straight men, the franchise often misunderstood which of its male characters were attractive, and how to plausibly hook them up with women. Anyway, I’m happy to note that Picard’s team actually Get It. Narek smolders mysteriously from the shadows, making it abundantly obvious why his love-interest finds him appealing—and why their relationship is likely to get very complicated, very fast.

Picard and Discovery both had unusual creative journeys, with Discovery replacing two sets of showrunners while Picard started off with no showrunner at all, promoting novelist (and longtime Trek fan) Michael Chabon partway through production. Episode 1 was directed by Hanelle Culpepper and written by Chabon and producer Akiva Goldsman, best known for making corny blockbusters like I Am Legend. However, there’s additional “story by” credits for Kirsten Beyer (an established Trek writer), Alex Kurtzman (CBS’s Star Trek boss) and James Duff, along with a whole fleet of consultants and producers including Patrick Stewart (who had considerable input), and Rachel Getting Married screenwriter Jenny Lumet.

Usually, this number of credits indicates a “too many cooks” scenario, but it worked for Picard, which displays clear artistic and political goals from the start. Episode 1 sags under some of the clunky exposition you’d expect from a story with 20 years of prologue, but the emotional arcs for Picard and Dahj are immediately compelling, building on cleverly-chosen ideas from earlier canon. By episode 2, I was in love. Patrick Stewart’s passionate, layered performance is the cornerstone, staying true to Picard’s values while taking him in bold new directions. In some ways, it echoes the ambitious choices Rian Johnson made for Luke Skywalker in The Last Jedi. This is Picard at his most vulnerable, working without a safety net. Yet this vulnerability goes hand-in-hand a new emotional openness, reaching out to characters like Dahj on a personal level, and allowing far more warmth and flexibility in his friendships.

Character-driven and serialized, Picard’s format is different from its predecessors, even the longform storytelling of Deep Space 9. But in terms of its general themes and its treatment of Picard and Starfleet, it feels like a natural, thoughtful, affectionate continuation. After all, this is hardly the first time a Star Trek hero has rebelled against Starfleet. It may be a utopian future, but it’s never been a perfect one. Starfleet has always faltered under corrupt leaders and dubious policies, including strains of bigotry against “artificial” lifeforms like Data. Picard just leans further into these ideas, contrasting the stagnating, insular Federation with Picard’s compassion and moral fortitude. And don’t worry, it still finds time to be funny.

Star Trek: Picard airs each Thursday on CBS All Access in the US, and on Amazon elsewhere.