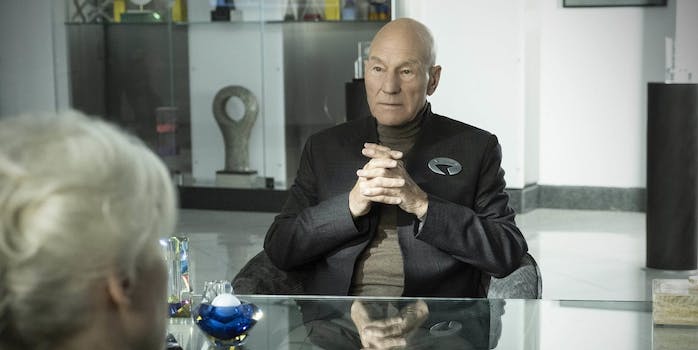 Admiral Picard starring in a Romulan spy thriller? Yes please and thank you.

Star Trek: Picard is all about the shift of the Overton Window. While Jean-Luc Picard follows the same values he did in The Next Generation, the Federation has grown more insular and xenophobic. This ideological shift was foreshadowed by Starfleet’s earlier bias against androids—not to mention the racial tensions between Federation species—and it’s resulted in a grim new political reality. At 92 years old, Picard represents a more progressive era of history. You can easily see the real-life parallels.

There’s an argument to be made that Star Trek has no right to be so dystopian. It’s meant to show us a better future. But in episode 2, we see how closely this show ties into the early days of The Next Generation, Star Trek’s most optimistic, utopian spinoff. The pre-credits scene shows what happened on Mars 14 years ago, when an army of (seemingly non-sentient) androids went rogue, killing thousands of people. Starfleet quickly withdrew from rescuing Romulan refugees elsewhere, and the Federation outlawed any further research into synthetic life—which is why Dahj and Soji, Data’s “daughters,” are such a unique and shocking development.

This all ties directly into “The Measure of a Man,” an early TNG episode that introduced a more cerebral slant on the allegorical storytelling of the Original Series. Making the most of Patrick Stewart’s acting talents, it’s a courtroom drama where the android Data must persuade Starfleet that he’s a person with equal rights to his crewmates. If he fails, then a cyberneticist named Bruce Maddox will be allowed to experiment on Data’s brain, potentially killing him. Toward the end of the episode, Guinan (Whoopi Goldberg) points out that if Maddox wins, he’ll have legal precedent to build a race of android workers with no legal rights. “You’re talking about slavery,” says Picard.

Decades later, this prediction came true. The Federation used synthetic labor on Mars, with androids bearing a startling resemblance to a young Bruce Maddox. At the time they were treated as subhuman, and the Federation now sees them as an existential threat. But while this backstory creates a darker tone than TNG, it’s not unreasonably grim. The current political climate is a clear continuation of problems that already existed within Starfleet, stretched to breaking point by a world-shaking disaster; the Federation’s equivalent of 9/11.

Back in the present day, Picard and his two Romulan housekeepers, Laris and Zhaban, begin to investigate Dahj’s death. Who were those Romulan assassins? Picard suspects the Tal Shiar, the Romulan secret police, but Laris has another suggestion: The Zhad-Vash, a cabal with near-mythical status in Romulan society. Apparently Zhad-Vash is “a term sometimes used to refer to the dead, the only reliable keepers of secrets.” Ah, Romulans! According to Laris, this mysterious organization protects a secret “so profound and terrible that just learning it could break a person’s mind.” They’re also motivated by an ancient, obsessive hatred of synthetic life.

Using Romulan CSI tech from her past life as a Tal Shiar agent, Laris discovers that Dahj’s apartment was scrubbed. There’s no way of knowing who attacked Dahj and killed her boyfriend, although they do learn her sister Soji is offworld, prompting Picard to request a ship from Starfleet Command. He assumes that Starfleet will welcome him back with open arms. Instead, Admiral Clancy (the show’s first “badmiral,” a familiar trope) dismisses his story with open disbelief, painting Picard as an irrelevant, emotionally volatile retiree. This hits particularly close to home because Picard’s doctor recently diagnosed him with a terminal illness, causing neurological symptoms including vivid dreams and mood swings.

Once Picard storms out, Admiral Clancy relays the whole conversation to the head of Starfleet Intelligence, Commodore Oh. Clancy thinks Picard is delusional or senile, but she doesn’t know what’s really going on. The next scene reveals that Oh personally ordered Dahj’s botched kidnapping and the resulting cover-up. Bringing up security footage from the assassination, she dresses down an underling (Lieutenant Rizzo) for mishandling the mission. They’re both undercover Zhad-Vash agents, embedded in the upper echelons of Starfleet. Rizzo reassures Oh that she put her “best man” on the job of tracking Soji, using very different methods to the hit-squad that killed Dahj. Thankfully though, these conspirators aren’t actually omniscient. Believing that Picard has already given up, they don’t realize he’s traveling to ask his old friend Raffi (Michelle Hurd) for help. If Starfleet won’t give him a ship, then he’ll turn to piracy.

The graveyard of the Borg

If you were suspicious of Narek’s “I’m a sweet soft boy” shtick last week, then give yourself a very small gold star. He’s another undercover agent, and he’s seducing Soji for information. But before we find out about that (and the fact that he’s Lieutenant Rizzo’s brother!?), we’re introduced to Soji’s work on the Borg Cube.

When a person is assimilated into the Borg Collective, their mind and body are transformed. The longer they stay, the less likely they are to remember their original identity, as proven by Seven of Nine in Star Trek: Voyager. Recovery is a complicated process, and the Romulan Reclamation Site employs scientists like Soji to extract and rehabilitate former Borg drones. It’s a very cool evolution from previous Borg canon, and it tells us a lot about Soji as a person. She’s highly qualified, sure. But she’s also very sweet and open-hearted, taking a new recruit under her wing during an intimidating first day on the job. “This facility has gone 5843 days without an assimilation,” says an ominous sign in one of the halls, where a delightfully melodramatic Romulan guard gives the researchers a safety spiel: don’t touch unknown tech, and be respectful of former Borgs wandering around “the Grey Zone.” Intriguing!

While Picard’s storyline explores the Federation’s political landscape, Soji’s role opens up exciting new avenues of Borg and Romulan canon. As Narek explains, this particular Borg Cube was severed from the Collective, which still exists elsewhere. When Soji’s new recruit friend expresses concern about drones being “released,” Narek explains that they’re actually being reclaimed, and hopefully rehabilitated. To the Borg Collective, this Cube is a graveyard. “And what does that make us?” asks Soji.

“The same as you find in any graveyard,” replies Narek. “Some have come to feed on the dead, some are ghosts, and a few—like you, Dr, Asha—pin their hopes on resurrection.” It’s a wonderfully gothic sentiment, setting the tone for our first look at Soji’s actual job. Working alongside Romulan scientists, she helps with a surgical procedure to remove Borg implants from an unconscious drone. She’s more openly compassionate than her colleagues, objecting to them referring to their patient as “Nameless.” It’s a nickname for an unknown race that the Borg Collective assimilated long ago, reminding us that humans weren’t their only victims. The Borg are so old and far-reaching that they absorbed entire cultures we’ve never heard of before.

Meanwhile, Narek watches quietly from the sidelines. In the context of that final scene revealing his undercover status, his viewpoint becomes even more enigmatic. From our perspective, Soji is a caring individual who feels unusually sympathetic toward the Borg. Narek’s interest initially feels like a combination of intellectual curiosity and attraction, studying Soji’s warm and compassionate nature in the operating room. In retrospect, we know he’s actually cataloging her behavior for his own research as a spy, fully aware that Soji herself is an android. Does Soji subconsciously recognize a connection between herself and the Borg, or is she just… nice? Either way, she represents the Zhad-Vash’s mortal enemy, something that Narek’s own sister describes as an “abomination.”

As I mentioned in my spoiler-free review of the first three episodes, I love what this show is doing with Romulan culture. In classic episodes like “Face of the Enemy” and “Balance of Terror,” the Romulans are portrayed as secretive and militaristic. However, we don’t see much of civilian life or cultural diversity in earlier series, because Romulans usually star in Cold War episodes about spies and battlefield stalemates. Retaining key elements of what came before, Picard adds new layers of complexity to Romulan culture, using characters like Laris, Zhaban, and Narek.

As a spy with enigmatic motives, Narek plays a classic Romulan role. But from his very first scene, he feels like a fresh take. He’s so convincing that you already wonder if he’s doubting his own mission, becoming too sympathetic toward his target. At the same time, we know his public persona is fake. His job is to surveil (and possibly kill) Soji; a classic honey-trap mission. Generally, this trope plays out with a female agent and a male target, and it’s satisfying to see how Narek (and the show’s writers) constructed the right guy to convincingly seduce Soji. Last week, I described Narek as an emo Ben Whishaw, and this hint of vulnerability is crucial to his appeal. During their very first interaction, he’s thoughtful, non-threatening, and emotionally sensitive. By episode 2, they’ve already slept together, and while Narek is blatantly secretive about his life and history, Soji knows this is normal for a Romulan. His mysteriousness just becomes part of their romantic banter.