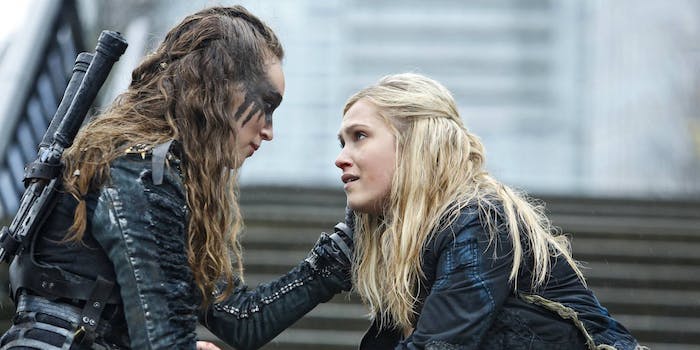 These were the most reblogged romantic pairings on Tumblr this year.

Tumblr just posted its top ships of 2016, and for the first time a femslash ship is at No. 1.

Tumblr’s Year In Review is always interesting, telling us which communities, people, and topics received the most attention on the site. This year, The 100‘s Clarke and Lexa (Clexa) topped the list of most-reblogged fandom pairings, beating old favorites from Sherlock, Supernatural, and the Marvel franchise. Femslash pairs two female characters in fan-created art and fiction, while slash pairs men.

Here’s the top 10, according to Tumblr:

As in previous years, the most popular type of pairing is two white dudes. All of the most-reblogged ships are male/male, aside from Clexa and Rey/Kylo Ren from Star Wars. (Sadly, Finn and Poe Dameron didn’t even make it into the top 20.)

This makes it all the more impressive that Clexa and The 100 defeated heavy-hitters like Stucky (Marvel’s Steve Rogers and Bucky Barnes) and Larry Stylinson (One Direction’s Harry Styles and Louis Tomlinson), helped by two dueling factors. On the positive side, Clarke and Lexa were a couple in the show, unlike the vast majority of same-sex pairings. But unfortunately, much of that Tumblr conversation was probably driven by Lexa’s death and the subsequent media controversy over how alarmingly common death is for queer female characters on TV.

Elsewhere on Tumblr’s Year in Review, The 100 stayed strong. Alycia Debnam-Carey (Lexa) was the most-reblogged actress on the site, above Jennifer Lawrence, Margot Robbie, and Star Wars‘ Daisy Ridley. And in the TV category, The 100 was second only to Supernatural, proving more popular than Game of Thrones, Stranger Things, The Walking Dead, and Doctor Who.