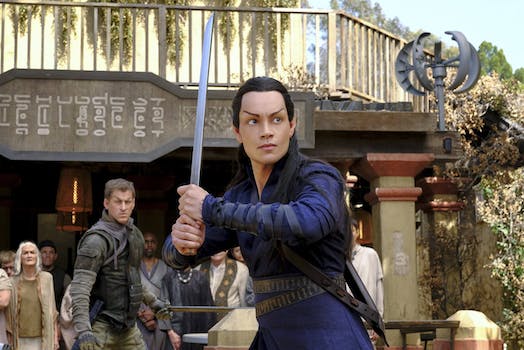 Say it with me: “Romulan warrior nuns.” It just trips off the tongue, doesn’t it? A welcome touch of self-indulgent sci-fi nonsense for episode 4, following the heavier content of the first three episodes. After getting his hands on a ship (La Sirena) and forming a new crew, Picard embarks on our first traditional “let’s visit an alien planet” episode, beaming down to the Romulan refugee colony on Vashti.

We first see Vashti in a flashback to the Romulan relocation program 14 years ago, shortly before the Federation screwed everything up. Back then, Picard is welcomed to the new settlement with open arms, where he’s already friends with Zani, one of those warrior nuns. They’re a sect who believe in “absolute candor,” opposing the typical Romulan love of secrecy and obfuscation. They’re also basically ninjas, which becomes relevant later on. Zani and her sisters are taking care of a young refugee boy called Elnor, who loves Picard but is destined for disappointment when Starfleet withdraws, separating Picard from his Romulan friends for 14 years.

It’s always interesting to see Picard interact with kids, because his dislike of children was one of his earliest defining traits. Picard isn’t a family man, but he was a caring mentor to characters like Data, to the point where Dahj and Soji are almost like his surrogate grandchildren. In the flashbacks he enjoys Elnor’s company, bringing him a copy of The Three Musketeers—a perfect cultural crossover point between an elderly French fencing enthusiast, and a Romulan child raised by an honor-bound society of righteous assassins. Despite the desperate circumstances, there’s a real warmth and optimism in the early days of the Vashti settlement; something that’s visibly absent when Picard returns in the present day.

Picard wants to recruit a warrior nun to help him find Soji, but much like his trip to Starfleet HQ, he doesn’t receive the warm welcome he expected. Vashti is much poorer than before, and there are obvious ethnic tensions signaled by a “Romulans only” sign outside the local bar. When he arrives at Zani’s monastery, he learns that the nuns never found a new family to adopt Elnor. Now an adult, he’s received expert training in their combat techniques, but he can never truly belong because it’s an all-female sect. Elnor is understandably resentful towards Picard, a father-figure who abandoned him for reasons too complicated for a child to understand.

Elnor (Evan Evagora) is a reminder of Star Trek: Picard’s unusually diverse age-range among the main cast. Since Star Trek characters are usually at the prime of their Starfleet careers, the franchise typically casts people in their thirties and forties. This show gives us a 92-year-old protagonist, paired with middle-aged allies like Raffi, Laris, and Zhaban. Soji and Elnor are noticeably youthful by comparison, both displaying a lot of technical skill but very little life experience. Elnor’s truthful nature (remember: absolute candor!) makes him seem even more naive and vulnerable, especially when Picard asks him to join his crew. “That is why you need someone,” says Elnor, after Picard explains the dangers of his quest to find Soji. “Why do you need me?” Picard thinks he needs to sell the importance of the mission, but Elnor —an outsider in his own home—wants to be valued as a person, not just as a tool.

Star Trek’s sincerity is a boon for this kind of scene, allowing us to enter full Lord of the Rings territory. There’s often a healthy dose of self-serious fantasy in the worldbuilding for Vulcan and Klingon culture, and now we have what basically amounts to a Romulan knight-errant. “Will you bind your sword to my cause?” asks Picard. Elnor turns him down, but we know he’ll join the crew by the end of the episode. Spurred on, it turns out, by a bar fight.

Accepting Elnor’s rejection, Picard sits down in a Romulans-only bar, pissing off some disgruntled locals. At first, this seems like an uncharacteristically aggressive move for Picard, but you have to remember two things: he subconsciously wants to confront his part in the refugee crisis, and he has a neurological disease that causes mood swings and vivid dreams of the past. His feelings about Vashti are close to the surface, and he just discovered that he failed another young person he promised to protect.

Cornered by a crowd of Romulans, Picard squares off against a tough-looking guy who accuses him of abandoning the refugees. It’s a complicated moment because this man is absolutely right to be angry, but we’re conditioned to sympathize with Picard. You could argue that the show is focusing too much on Picard’s guilt instead of the refugees themselves, but I think it makes sense in context. Picard is the title character, and he’s also a public figure, possibly the most famous human in the Romulan diaspora. Starfleet’s failures may not be his fault, but he’s an obvious choice of scapegoat. He’s the person who actually promised to help, and then failed to keep his promise. That’s why Picard refuses to fight back when this man challenges him to a duel in the town square. He’s about to get skewered when Elnor appears and chops the guy’s head off, shocking Picard into silence before they both beam up to La Sirena.

Why did Elnor change his mind? The answer is almost a punchline. Apparently he realized that Picard’s quest fulfilled all the criteria for Elnor’s warrior creed: his adoptive sect will only bind their swords to “a lost cause.”

Narek and Soji’s romance continues to be a delicious combination of cute and creepy, as Narek takes her on a date to perform an “ancient Borg ritual”: sliding on their socks along an empty corridor in the Borg Cube. What a sweetheart! He’s a fantastically convincing liar, but I still suspect he’s falling for Soji, complicating his mission to uncover her android secrets. Secrets that she herself doesn’t consciously know, because she isn’t aware that she’s an android.

She is, however, smart enough to be suspicious of her mysterious new boyfriend. Admitting that she’s a naturally trusting person, she questions why he’s allowed to go wherever he likes on the Borg Cube, despite having no uniform or designation. He must, she concludes, be a Tal Shiar spy. And he’s definitely been watching her, although (he assures her with technical accuracy) not in the way she thinks. As he points out, they both search for information “to feed an insatiable curiosity,” but that commonality isn’t enough to prevent an argument when he starts prying into her past.

The final scene is a dogfight between La Sirena and a Romulan ship in Vashti’s orbit, interrupted by a pilot who turns out to be Voyager star Seven of Nine (Jeri Ryan). That’s an exciting cliffhanger for next week, but the build-up also tells us a lot about current interstellar politics. On their way to Vashti, Rios warned Picard that the sector is rife with “smugglers and petty warlords,” filling a power vacuum after (we assume) Starfleet withdrew. There’s also an outfit called the Fenris Rangers patrolling the area, and the self-explanatory Romulan Rebirth Movement. It sounds a lot like the Outer Rim in Star Wars, a predictable outcome of the Federation’s increasingly insular attitude. I hope the show elaborates on the economic situation here, because they need to maintain a balance between Star Trek’s optimistic ethos and this grim new political landscape. There are plenty of other sci-fi franchises about smugglers and vagabonds, but very few about diplomats.

Star Trek fans love to tout the franchise’s post-capitalist setting, but Trek canon is infamously malleable. Replicators mean the Federation is a post-scarcity, post-monetary economy, but there are still plenty of references to Starfleet officers buying stuff with local currency, or collecting and exchanging rare items. Picard depicts an obvious economic disparity between Picard (who inherited his family chateau) and Raffi, but Vashti is our first sign of real hardship. Between Rios’ mention of warlords, and the DIY policing performed by the Fenris Rangers and Zani’s nuns, we’re getting hints of widespread unrest across the galaxy; the kind of unrest that was previously quelled by the peacekeeping efforts of ships like the Enterprise.

The fact that Picard hired an off-books smuggling ship is a sign of the times. We don’t know much about Rios yet, but we can read between the lines. “The captain keeps his own company,” says Raffi at one point, referring both to Rios’ loner status, and the fact that his ship is crewed by hologram clones. Last week, we met the medical and navigational holograms (Irish and English AIs, also played by Santiago Cabrera), and this week we met the hospitality program and the tactical officer (American and Spanish). After leaving Starfleet for unknown reasons, Rios now operates alone in Federation space and beyond, experiencing the chaos firsthand while Picard, an old Starfleet insider, remained totally unaware from his sheltered vantage point on Earth.