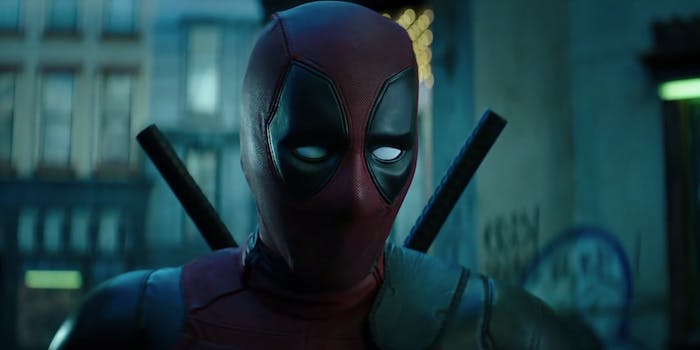 If there was one big surprise out of the superhero film genre in 2016, it was the massive success of Deadpool.

Sure, the irreverent mercenary had some things going in his favor. Deadpool already had a substantial comic book fanbase, movie audiences were thirsty for something different, and Ryan Reynolds’ own appreciation for the character made for a faithful adaptation. But the R-rated Deadpool was still a significant risk for 20th Century Fox (they dumped it in February for god’s sake), making its unexpected $783 million success a game changer that paved the way for more unusual, R-rated superhero flicks like the highly praised Logan.

Now Reynolds and Fox are under pressure to hit another home run with Deadpool 2, and this time production isn’t just being watched by Deadpool’s cult fanbase. Millions of new fans are gobbling up every casting rumor and teaser.

That’s why a tremor of concern shivered through the fan community recently as rumors of reshoots and bad test screenings circulated. Fortunately, it doesn’t seem like we should worry.

Deadpool’s cast returned for re-shoots in February, following early screenings with test audiences. Studios use these screenings to gauge fan reactions make last-minute adjustments, and in some cases, films that test poorly will get dramatic overhauls. Collider editor Steven Weintraub says the Deadpool 2 reshoots have a less catastrophic explanation. Apparently, the test audiences loved Cable and Domino so much, the studio decided to give them additional scenes.

Here’s everything else you need to know about Deadpool 2.

Deadpool’s marketing strategy has always been unorthodox (that’s part of what drove amused audiences to theaters for the original). So perhaps it should come as no surprise that the Merc with the Mouth showed up in a post-credit scene that actually ran before screenings of Logan.

The first teaser arrived on Nov. 15, and it’s characteristically weird. It mostly consists of Deadpool cosplaying as everyone’s favorite art teacher Bob Ross (why not?), before segueing into a series of clips from the upcoming movie.

We get to see some action sequences, Negasonic Teenage Warhead flipping the bird and a glimpse of Hunt for the Wilderpeople star Julian Dennison in a room full of flames. He’s probably playing a mutant, but they’re yet to identify his character by name.

The newest trailer for Deadpool 2 gives fans its biggest look yet at Cable and Domino, functioning as a more traditional trailer than the first teaser. But it also breaks the fourth wall multiple times as Wade Wilson comments on the script’s “lazy writing,” and Deadpool cuts in mid-trailer to enact a fight with Deadpool and Cable action figures while the VFX team added in visual effects into the trailer.

The third trailer (or second, if you don’t count the Bob Ross one) gives the X-Force team a proper introduction. We also get a glimpse of several new fight scenes (half-naked guys in a sauna?) and a connection to the main X-Men franchise.

Reynolds is now almost as synonymous with Deadpool as Hugh Jackman is with the Wolverine. He’ll definitely be back, joined by a number of popular comics characters.

It was Deadpool himself who first name-dropped Cable in the post-credit scene of the first movie. The two were often paired together in the comics, and while Cable’s mutant powers had several iterations, he’s been known to have telepathic, telekinetic, and time-traveling abilities.

Fans started speculating about who would play Cable as soon as his name left Deadpool’s lips—in fact Deadpool even added his own picks: Mel Gibson, Dolph Lundgren, or Keira Knightley.

Several actors were floated as being under consideration, and on March 22, Variety reported that Michael Shannon (Boardwalk Empire) was the front-runner. Speculation continued to circulate into April, when both Brad Pitt and Pierce Brosnan publicly denied Cable casting rumors.

On April 12, the Hollywood Reporter announced that Josh Brolin (No Country for Old Men) had grabbed role. He’s no stranger to superhero flicks, having already played Marvel’s biggest bad Thanos in a number of Avengers franchise movies. Even more interesting, the site claims Brolin’s deal is for four movies (according to unnamed sources), giving us the best idea yet how far 20th Century Fox could ride the Deadpool bandwagon. Though given the sprawling nature of superhero franchises these days, it’s equally possible that deal could include non-Deadpool-titled films.

Zazie Beetz (Atlanta) has been tapped to play Domino, a fellow mercenary with mutant probability-shifting powers that give her good luck. (She’s also a hell of a good shot.)

Behind the scenes, Deadpool director Tim Miller won’t be back for the sequel. Instead, John Wick director David Leitch is taking the helm, with a script penning by returning writers Rhett Reese and Paul Wernick.

Shatterstar probably has a minor role because the main characters were all announced months ago. However, there’s another reason why this is big news for Fox’s Marvel franchise: Shatterstar is bisexual in the comics, dating the seismic-powered X-Man Rictor. This would make him the second canonically queer character in the X-Men movies, after Deadpool himself.

Deadpool 2‘s creative team has given us few clues about what story the sequel might tell, aside from what we can glean from the characters that’ll appear. Cable is sure to play a significant part, and we know from the comics that he’s often portrayed as the long-suffering straight man when paired with the raunchy hilarity of Deadpool. The original movie’s post-credits scene specifically mentions Cable’s time-traveling abilities, so it’s possible those will factor into the plot.

We might also see an attempt by 20th Century Fox to tie wildly popular Deadpool into the rest of its X-Men universe. If it does go that route, it should proceed cautiously to avoid falling into the over-bloated-superhero-sequel trap.

This delightful poster Reynolds shared via his Twitter account on Nov. 9 with the message, “Thanksgiving in our house is a glorious, non-stop car accident set to the music of cocaine.” It features much of the Deadpool 2 cast and the fun Easter egg of Stan Lee in the portrait on the wall.

Deadpool 2‘s release date has been moved up from June 1 to May 18, just one week before the Han Solo movie‘s (alleged) release date. Does this mean Han Solo will, as many people suspected, be delayed? Or are Fox and Marvel just confident that Deadpool can compete with Star Wars?