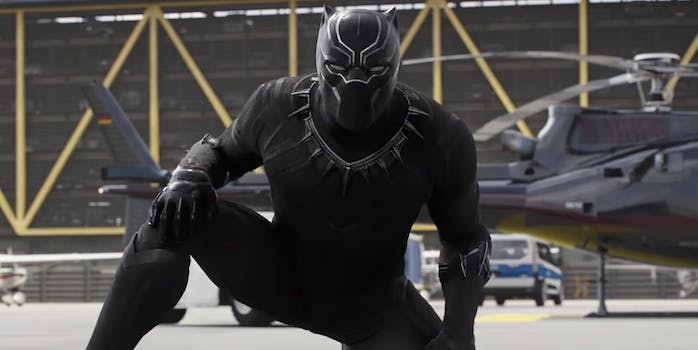 Marvel's Black Panther movie has some serious talent on board.

After stealing the show in Captain America: Civil War, newly appointed king T’Challa was the main focus of his own solo Black Panther film in the fictional African nation of Wakanda. The cast for the film was already stacked to the brim with talent, and tapping Ryan Coogler (Creed, Fruitvale Station) to direct only gave fans more faith that the finished product will be incredible.

Black Panther released in February 2018 to massive critical and box office success. Below are the details we knew about the film prior to release and our final verdict.

Marvel offered an official plot synopsis as the film went into production:

“Black Panther” follows T’Challa who, after the events of “Captain America: Civil War,” returns home to the isolated, technologically advanced African nation of Wakanda to take his place as King. However, when an old enemy reappears on the radar, T’Challa’s mettle as King and Black Panther is tested when he is drawn into a conflict that puts the entire fate of Wakanda and the world at risk.

In case that wasn’t enough information for you, cast member Lupita Nyong’o gave Screenrant the most detailed plot synopsis we’ve gotten to date.

“The story of this Black Panther is—what am I allowed to say?—The story is that the Black Panther’s leadership is really threatened by two foes who come together, and so Black Panther gets the help of the C.I.A. and the Dora Milaje to try and defeat the enemy.”

This plot sounds as if it was ripped directly out of a Black Panther comic book as the king of the wealthy and technologically advanced nation of Wakanda is often defending his country and throne from both domestic and foreign threats. It’s kind of the main thing he does, actually.

The two foes that Nyong’o is referencing are quite likely Erik Kilmonger, a Wakandan exile who has a personal grudge against T’Challa, and Ulysses Klaue, an illegal arms dealer previously seen in Avengers: Age of Ultron who eventually gets a robotic claw—see what they did there?—to replace his severed hand.

In late April 2017, just days before shooting wrapped on the film, Marvel executives showed a group of reporters a few glimpses of footage from the film. According to the Hollywood Reporter, the clips included a coronation scene where T’Challa ascends the throne following the death of his father in Captain America: Civil War. Reporters also described two additional fight scenes, including one that seems to confirm Klaue will have some kind of hand replacement in the film.

Chadwick Boseman will return as the titular Black Panther/T’Challa, while Martin Freeman will reprise his role as Everett K. Ross, a government official who sort of works as a liaison between Wakanda and other nations. Andy Serkis will also be returning as Ulysses Klaue, who you just can’t leave out of the first Black Panther film.

#FBF to dropping by the @Marvel offices and meeting mini #BlackPanther for the first time. The suit's calling my name… pic.twitter.com/VgDRFM6Gog

Black Panther will be taking place in Wakanda, a mostly new location that the Marvel Cinematic Universe has only visited for a brief post-credit scene in Captain America: Civil War. It’s exciting that the film will serve as most of the world’s introduction to the beacon of black excellence, but it will also bring a lot of new faces to the mix.

For starters, it wouldn’t be a Ryan Coogler film if he didn’t find a role for Michael B. Jordan, who will play Erik Kilmonger, and hopefully repeat some of the magical chemistry the two have found in Creed and Fruitvale Station.

Lupita Nyong’o and Danai Gurira will play Nakia and Okoye, two members of the Dora Milaje, T’Challa’s personal security detail that’s fully composed of women trained in the skills of combat and self-defense. Nakia is rumored to be a love interest of T’Challa. Florence Kasumba will reprise her role as Ayo, another member of the Dora Milaje, whom viewers may recognize from an awkward-but-totally-awesome staredown with Black Widow in Civil War.

The cast is rounded out with the world-renowned talents of Angela Bassett as Wakanda’s Queen mother Ramonda, Forest Whitaker as Zuri, an “elder statesman,” Sterling K. Brown as N’Jobu, a vaguely referenced “figure from T’Challa’s past” and Daniel Kaluya, who just rocked the world with his lead role in Get Out, will play W’Kabi, a close friend and confidant to the king.

With the film taking place in a fictional African nation, Marvel had the perfect reason to hire a jaw-dropping amount of black talent for one project and add some diverse faces to a film franchise that, at one time, mostly focused on five white guys and Scarlett Johansson. To show that it’s truly committed to the cause, Marvel announced that 90 percent of the film’s cast will be of African descent. Only question now is how in the world are they going to fit in a Stan Lee cameo?

The Black Panther rumor mill is really slim at the moment, with a couple rumblings dealing with which characters could appear. After T’Challa agreed to help treat Bucky Barnes in Civil War, some fans hope for an appearance of not only the Winter Soldier, but Captain America himself.

Marvel typically releases the first set of teaser trailers for projects about six months prior to its premiere, but we were very fortunate to get an early teaser from Marvel Studios on June 9.

You can also check out this featurette on Black Panther shared by Marvel after the filming of Civil War.

Marvel debuted the second trailer on Oct. 16, along with a new poster. If possible, this trailer is even more awesome than the first. Black Panther is one of Marvel’s most visually distinctive movies, but there’s clearly substance beneath all that style. Without actually revealing any plot details, the trailer sets up the culture clash between Wakanda and the outside world, along with the Wakandans’ pride in their home country. Plus, we get some cool character moments like T’Challa hanging out with his sister Shuri, and Erik Killmonger (Michael B. Jordan) revealing his American accent.

Black Panther will officially celebrate its release to the world on Feb. 16, 2018.

“Instead of following a tired old structure for superhero origin stories, Black Panther dives into an expansive fantasy setting with an ensemble cast of shifting alliances. In that sense, it may be the best adaptation we’ve seen from Marvel Comics. Director Ryan Coogler and his co-writer Joe Robert Cole take some pretty complex political themes from the comics and articulate them in ways that even younger kids can understand.”

Editor’s Note: Despite what Twitter and Reddit users may claim, the Black Panther film and character have absolutely nothing to do with the revolutionary Black Panther Party, though the movie may include a fair amount of revolution and black panthers. The character was created months before the party existed.