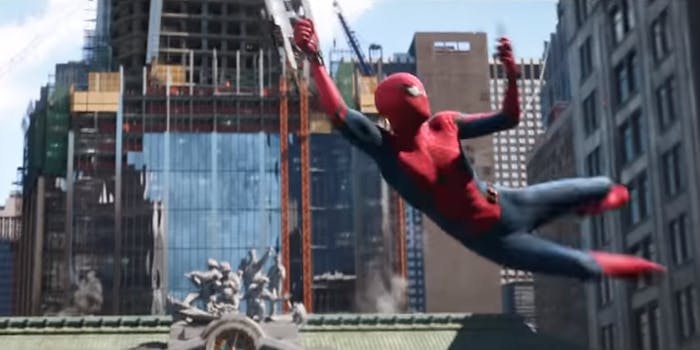 The latest 'Spider-Man' is full of Easter eggs, and ripe for fan theories.

For everyone in on E.D.I.T.H and the Peter Tingle, there was plenty to unpack in Spider-Man: Far From Home. Between the confusion surrounding the snap—or “blip,” as this film classifies it—and the enigma that is Mysterio, many fans left the theater with questions. Some of those questions were answered in the movie’s two post-credit scenes, but certainly not all.

But one redditor, who goes by KitsuneRisu, noticed that some of those questions are answered on a second viewing. After sitting through the ups and downs of Peter’s European adventure for the second time, KitsuneRisu noticed countless moments in which Mysterio’s true methods are hinted at. Not to mention the few times Talos and Soren reveal themselves to viewers in the know. Many of us may not have time to make it back to theaters while Far From Home is playing, but thanks to KitsuneRisu we have a breakdown of some of the carefully concealed holes in Quentin Beck’s plan.

Far From Home is the first Marvel film to really take a swing at our country’s current political climate. While nothing is expressly said, the overarching themes of fake news and misinformation recall a 2019 day spent browsing Twitter. Due to this approach, there were many parts of Far From Home that had viewers questioning their own eyes.

When Mysterio first shows up, Peter—and therefore the viewer—has no reason to question him. He delivers a believable tale, in a world filled with Spider-Men and time wizards, at least, and Peter takes him at his word. It certainly doesn’t hurt that Nick Fury believes him, either. Jake Gyllenhaal’s Quentin Beck gives our heroes little reason to disbelieve him until a hole in his illusions is discovered. It turns out it was far from the first time one of his illusions failed—we just weren’t watching close enough.

Not so wet, after all

The first moment flagged by KitsuneRisu was pretty early on in the film. The first Elemental to appear on Peter’s European vacay is water-based. In the course of the fighting, Peter ends up getting decked full-on by the entirely liquid creature. While most of us didn’t catch it the first time, KitsuneRisu noticed something strange their second time around—Peter doesn’t get wet. Not even a little. It isn’t until the water from the canal surges and soaks the entire bridge that he ends up drenched. This early hint went right over most fans’ heads, but it turns out Beck’s illusions can only go so far.

If Nick Fury, who it turns out was secretly an alien in disguise this whole movie, had really been involved, there is no way he would have missed this. In a scene not long after Peter’s introduction to the Elementals, “Fury” comes driving up to the scene of the battle with the Fire Elemental. As he arrives, the Fire Elemental hurls a wave of flame at the car. Rather than burn the paint on the vehicle or cause temperature damage, however, bullet holes appear on the windshield. While many viewers likely thought this was due to heat—which can sometimes crack glass—or falling debris, it is in fact due to the drones’ limited abilities. They may be able to make a flaming creature appear before peoples’ eyes, but the advanced technology doesn’t come equipped with flame throwers. As KistuneRisu notes in their Reddit post, the drones use attached guns to cause the collateral damage from Beck’s creations.

Mysterio on the roof

The filmmakers were just trolling us with this one. After a conflicted Peter takes to a rooftop to consider his responsibilities, Mysterio floats up to join him. On-screen we saw a fully suited-up Mysterio ascend in front of Peter, flying through the open air. KisuneRisu’s second watch through revealed an easily missed detail, however. The shot pans from the door behind Peter, over to where the costumed Beck joins him on the ledge. Without knowing about Beck’s true methods, this might seem like a creative choice by the filmmakers. Armed with the knowledge that Beck cannot, in fact, fly, however, it becomes clear that the camera was following the invisible Beck on his walk to join Peter.

Beck in the crowd

Despite his obviously keen eye, KisuneRisu didn’t actually catch this one. A commenter on their Reddit post was kind enough to add in this clever realization from a scene early in the film. As he and his classmates are enjoying Venice, Peter slips away to visit a nearby glassblower’s shop. During this scene, redditor jfeppard noticed a familiar face in the crowd behind Pete. Beck follows from enough of a distance to avoid his Peter tingle, apparently, but is sure to keep the web-slinger in sight. A subtle henchman can also be seen on the bridge when Peter and MJ pass, revealing how carefully Beck was watching the young hero.

More than a week after the movie hit theaters, Gyllenhaal posted a photo of himself to Instagram in classic dad attire: cheesy floral button-down, khaki pants. He requested of audiences to look closer at scenes from Far From Home, writing “This isn’t just a sexy dad outfit. It’s my favorite look from Spider-Man: FFH #wheresbeck.”

If you hung around long enough to see the post-credits scene, you know that Nick Fury and Maria Hill never made it to Venice. Or Europe. Or Earth. Instead, Fury, at the very least, is actually spending his days in distant space, probably plotting out a replacement for S.H.I.E.L.D. The Fury and Hill we saw in the film were, in fact, two of the Skrulls from Captain Marvel: Talos and Soren. While they played their roles well, these alien copycats slipped up once or twice when impersonating Earth’s uniformed protectors.

It’s a brief moment, but several viewers seized upon a line from Talos/Fury early in the film. While explaining Mysterio’s origins to Peter, Fury notes that Beck is “from a world… not yours.” The line shot past most viewers too quick to catch, but once you know about Fury’s true identity it becomes much more clear. If Fury had actually been speaking, he would have said “from a world… not ours,” because he, too, is from Earth. Talos and Soren managed to keep the ruse going all the way to the end, however, so clearly, this slip-up was a minor one.

The Skrulls did an excellent job concealing their identities, but KitsuneRisu managed to catch another potential slip-up in their ruse. After being tapped by Fury to join the fight again the Elementals, Peter lists numerous heroes that would be better suited to the task. When he reaches Captain Marvel, Fury cuts him off with a line that sounded strange to many viewers: “Do not invoke her name.” While this could easily have been intended as nothing more than an amusing line, considering how close Fury and Danvers are (or Talos and Danvers, in this case) there is another possibility: “A little bit of god worship, perhaps,” KitsuneRisu wrote. Considering what Danvers did for the Skrull, worshipping her as the hero of their race wouldn’t seem strange.

Many of the additions to this list are purposefully hidden moments in the film. Catching them reveals the care with which filmmakers considered Beck’s character and plot. There were a few installments on KitsuneRisu’s list, however, that come closer to theory than keen observation.

It didn’t take long for MJ to discover Spider-Man’s secret identity. In the first film, Zendaya’s Michelle Jones played a minor role, spending most of her screen time playfully mocking classmates. In Far From Home, however, MJ becomes a major player in the plot. After Peter puts his faith in Beck, MJ reveals her suspicions about Peter’s alternate identity. While she admits that it was just a theory until Peter confirmed it, KitsuneRisu believes that MJ got all the proof she needed earlier in the film.

En route to their vacation, Peter mistakenly calls a drone strike on a fellow classmate. In an attempt to stop a disastrous situation from unfolding, Peter distracts the class with baby goats before jumping out of the roof hatch and shooting the drone down. It is in this moment that KitsuneRisu believes MJ learned Peter’s superhero identity. “MJ was the only one who didn’t turn her head,” they wrote. “She was staring at Peter the entire time. I think this is the moment she realised he was Spider-Man for real.”

What was going on with Flash’s family? The MCU’s Flash Thompson is, as he has always been, a somehow charming, arrogant punk. He spends most of his time on-screen mocking Peter or lauding Spider-Man. In Homecoming, his role could be chalked up to schoolyard bully and minor antagonist. In Far From Home, Flash became a more nuanced and complex character, albeit one with disarming lines. Still, KitsuneRisu noted that Flash and his family were noted throughout Far From Home. This indicates that the Thompsons may well have a larger role in the future.

KitsuneRisu outlined this theory around two scenes in particular. “During the scene where Peter is spying on everyone’s mobiles, we see Flash send a text to his mom saying that she and dad haven’t messaged him for days,” they wrote. “At the end of the movie, we also see that Flash’s mom didn’t show to pick him up at the airport. It’s a weird time for them to put in character development, so I feel that he’s being developed for the 3rd movie. Perhaps… Agent Venom?” The theory has little else to go off of. Flash still seems a bit young to go the Agent Venom route, but the MCU may well be planting seeds for future plotlines.

KitsuneRisu’s final theory requires some serious background knowledge. During the film’s first post-credits scene, Peter and MJ swing through New York together for the first time. When they land, a few keen-eyed viewers noticed something in the background. “There is a construction yard divider at the end of the movie during the bonus scene which shows the text ‘We can’t wait to show you what we have next!’ or something close to that,” KitsuneRisu wrote.

“On the same divider, we also see a circle around a 1, next to which is an arrow to a circle around the number 2, and so on until a circle around a question mark which is definitely supposed to be the number four.” They note that this addition could be a nod to Phase 4 of the MCU, if not for another part of the construction site which caught their eye. “I noticed the construction site was on 42nd street thanks to a very carefully placed street sign. The Baxter Building is on 42nd and Madison, which effectively confirms this to be a Fantastic Four reference.”

This isn’t so much a theory as a fun nod, but we have to give KitsuneRisu props for catching it. After successfully fooling Peter at the bar, Mysterio pulls his suit off to reveal a skintight green jumpsuit underneath. “This is a reference to Mysterio’s original uniform from the comics,” KitsuneRisu wrote. Indeed, the suit looks remarkably similar to the simple green attire donned by the man of mystery. We see you, Marvel Studios.