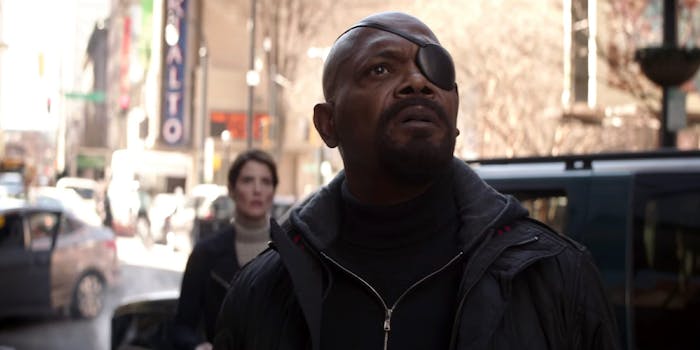 He didn't seem all that shocked before contacting Captain Marvel.

Nick Fury’s appearance in Avengers: Infinity War is brief but heart-wrenching as he turns to dust before our eyes. But he also seems more prepared for the situation than almost everyone else who crumbles, having the foresight to page Captain Marvel before he’s gone. Granted, that’s always been Nick Fury’s style, but how much did he know about the seeming inevitability of his own fate?

According to a recent Reddit thread, Nick Fury pretty much knew it all beforehand, and Captain Marvel, out next year, will reveal just how he learned—via another character traveling back in time to tell him (Doctor Strange is a possible candidate given he had possession of the Time Stone). Nick Fury’s always been a few steps ahead of the Avengers, and the theory posits because, for the past couple of decades, he’s been operating on information to create the perfect storm for the one scenario that Doctor Strange foresaw that would allow them to beat Thanos.

Nick Fury’s influence can be seen in a number of monumental choices from shooting a jet that aimed to take down Loki’s portal in Avengers to pushing Tony Stark to create Vision in Avengers: Age of Ultron, which was possible because of the Mind Stone. And even though we’re led to believe that he’s probably had Captain Marvel’s beeper on him since their first encounter, we never see him tempted to take it out—not even when aliens literally invaded Earth.

Of course, this isn’t exactly a new idea. A theory that popped up in August pointed to the Ancient One traveling back in time to tell Nick Fury what he had to do. Another one says that he held off on calling Captain Marvel because he knew they could handle aliens, robots, and Asgardians; disintegration is another story. A variation of the theory from August suggests that Nick Fury might’ve witnessed a Thanos-like snap before; when Tony Stark tells Nick Fury about the vision Scarlet Witch gave him in which the Avengers die (but Iron Man lives) and it’s his fault, Nick Fury is curious but not shocked.

Chances are he’s at least operating under some kind of additional information we’re unaware of, which, to be fair, is kind of Nick Fury’s entire MO.