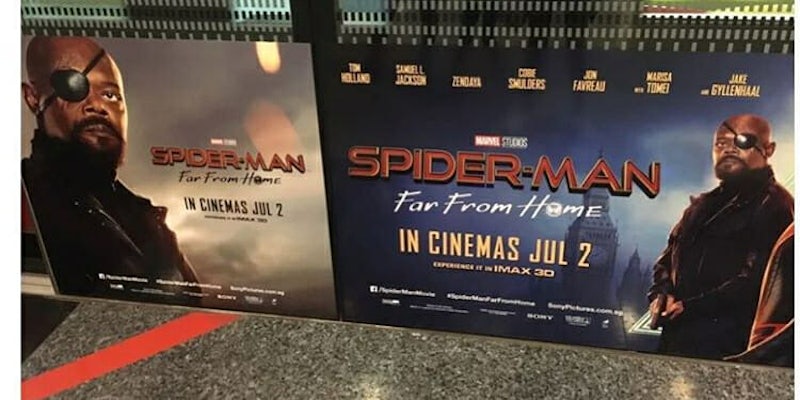 In the recently unveiled posters for July 2’s Spider-Man: Far From Home, Samuel L. Jackson’s Nick Fury can be seen sporting his trademark eyepatch. The problem? In two different posters, the head of S.H.I.E.L.D’s eyepatch is displayed first on the left eye, then on the right. Fans teasingly questioned Marvel about which eye Fury actually injured, only to have Jackson himself join the fun.

In an Instagram post on Monday, the 70-year-old actor shared a photo of the two posters next to one another. “Uhhhhhhh, What In The Actual FUCK IS GOING ON HERE???!!! #headsgonroll @lefteyemuthafuckka,” he wrote alongside the photo.

Uhhhhhhh, What In The Actual FUCK IS GOING ON HERE???!!! #headsgonroll #lefteyemuthafukkah

Nick Fury, portrayed by Jackson, has appeared in many of Marvel Studio’s major releases. In all of them, Fury’s iconic eyepatch is worn on his left eye. The mistake by Marvel Studio’s marketing team is minor, as these things go, and Jackson’s playful jab seems like the perfect response. While some fans are sure to find offense in the apparent slip-up, many responded with humor—particularly after Jackson made light of the error.

Many fans joined Jackson in his gentle trolling of Marvel Studios, but some began circulating theories about why the mistake may have occurred in the first place—if it even was a mistake.

Nick Fury occasionally moving his eyepatch from one side to the other with no explanation would be a great running joke.

Most fans agreed that the change, if purposeful, points to a popular storyline from the ’90s animated Spider-Man series. In one particular storyline, the villain Chameleon attempted to impersonate Fury, only to be discovered by Spidey after accidentally donning his eyepatch on the wrong eye.

On one hand, probably a bad Photoshop.

On the other hand, I specifically remember a cartoon where a certain Spider-Man villain impersonated Nick Fury and Spider-Man figured it out because this impersonator put the eyepatch over the wrong eye… pic.twitter.com/M9ZJsH1wNG

Reminds me of an episode of the animated series from the 90s where Mysterio disguises himself as Nick Fury (or was it a Skrull?) and Spidey notices because the eyepatch is on the wrong eye.

throwback to the plotline for an ep of Spider-Man TAS when Chameleon used the pic from J Jonah Jameson’s obituary for Nick Fury’s (faked) death where he flipped the img and got the eye patch on the wrong side so that’s how Spidey realized Chameleon wasn’t really Nick Fury ksjdbjx pic.twitter.com/ghWRhuEsIx

Whether the eyepatch switch was purposeful or not, Jackson’s response was absolutely perfect.