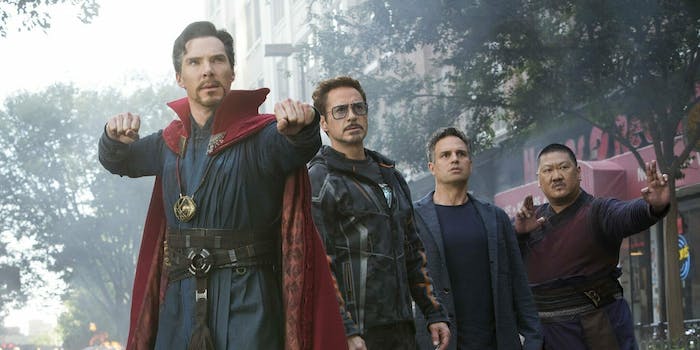 Infinity War‘s post-credits sting is essentially a bridge between this movie and Avengers 4. A lot of fans accurately guessed it would involve Captain Marvel, but the context is unusually intense for a Marvel teaser.

The movie ends on a massive cliffhanger, with Thanos using the Infinity Gauntlet to wipe out half of sentient life in the universe. That includes some major characters including Spider-Man, Black Panther, Bucky Barnes, and most of the Guardians of the Galaxy. Most of them have upcoming sequels so we can assume they’ll be resurrected in Avengers 4. But for now, the Marvel Cinematic Universe is in the midst of a colossal disaster.

Arriving right at the end of the credits, Infinity War‘s one post-credits scene features Nick Fury and Maria Hill. They’re driving through New York when Thanos starts deleting people from existence, and Maria is one of the first to go. We assume for a moment that Nick Fury is safe, but he disappears just in time to cut off Samuel L. Jackson’s catchphrase: “Motherf -.”

Fortunately, Fury was just in time to call for help. The final shot shows a souped-up pager lying on the ground where Fury stood, displaying Captain Marvel’s red, yellow and blue logo on the screen. Fury managed to send a message before vanishing.

What does the Infinity War credits scene mean for Avengers 4?

For those who aren’t familiar, Captain Marvel is Carol Danvers, a former Air Force pilot turned superhero. She’ll make her debut in 2019’s self-titled Captain Marvel movie, starring Brie Larson. Intriguingly, that film will take place in the 1990s. This makes it a prequel to the rest of the MCU, featuring younger versions of Nick Fury and Agent Coulson. Captain Marvel will then appear in Avengers 4, which raises an intriguing question: Where has she been all this time?

At the moment, the smart money’s on her having been in space. Captain Marvel comics are full of space adventures, and her movie will involve a war between two alien races. She may have time-traveled or been frozen in time since then, but she probably isn’t on Earth. Nick Fury’s cameo suggests she’ll be instrumental in battling Thanos in Avengers 4, potentially replacing Captain America’s lead role after Chris Evans exits the franchise.