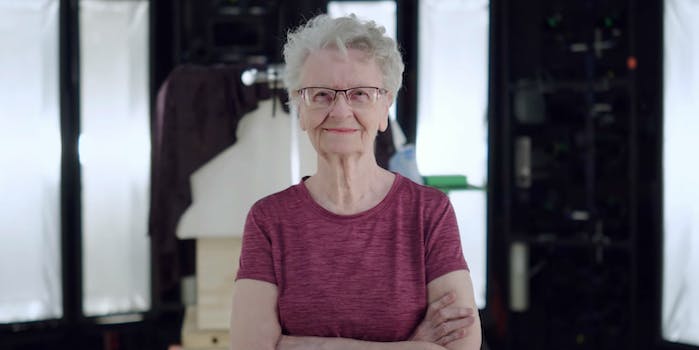 Shirley Curry, aka 82-year-old “Skyrim Grandma,” has been posting videos of herself playing Bethesda’s fantasy roleplaying game The Elder Scrolls V: Skyrim for the last three years or so, and it’s one of the most pure things you’ll ever witness. She’s amassed more than 500,000 subscribers on YouTube and a modest 34,000 Twitter followers in that time, calling her fans her “grandchildren.”

Now, Curry is being treated to what must surely be a dream of hers. Game developer Bethesda is turning Curry into a character in the upcoming The Elder Scrolls VI.

In a video from Bethesda celebrating the 25th anniversary of The Elder Scrolls franchise, it was revealed that Curry took a trip to Bethesda’s studio in Maryland in order to be digitally scanned and created into a character for the sixth installment of the series.

“This means a lot to me, because I would be extremely happy to know that somebody else was playing with my character in a future Elder Scrolls game,” Curry says in the video. She can be seen wearing a cap matting her hair down for a photogrammetry scan, which moments later appears on a developer’s screen in full 3D.

I forgot the best part!!! The picture!!! pic.twitter.com/iQGFNgobTN

In a separate video, Curry and Howard spoke with one another, reflecting on how far Curry has come and how special she feels to be a part of the next Elder Scrolls game.

“Well seeing it through your eyes has been a huge, huge treat for everybody here,” Howard said. “You should know that. We heard you were coming and were super excited. ‘Is she really coming?’”

“And I’m like ‘did they really ask me to come?’” Curry said.

In past interviews, including with this reporter for Polygon, Curry has been a vocal advocate for senior gamers, lamenting the stigma that has discouraged the elderly from engaging with games like Skyrim or others.

“I think the gaming industry is at fault because they don’t recognize older gamers,” Curry told Polygon in 2016. “I’ve talked to a lot of older players about that. They don’t mention their age. They hide behind anonymity because of the same comments I get. They say to me that they’re grateful I’m as open about it as I am, because they feel they can’t be.”

We probably won’t know anything more about The Elder Scrolls 6 until 2020 at the earliest, considering Bethesda has stated that neither Elder Scrolls 6 nor its new game Starfield will be seen at E3 this year. All that said, it will be a treat to see Curry in the new game, even if she’ll likely be a non-player character that you can’t recruit. We can dream, though, and hope to hear “hello, grandkids” as we enter a new fantasy world.