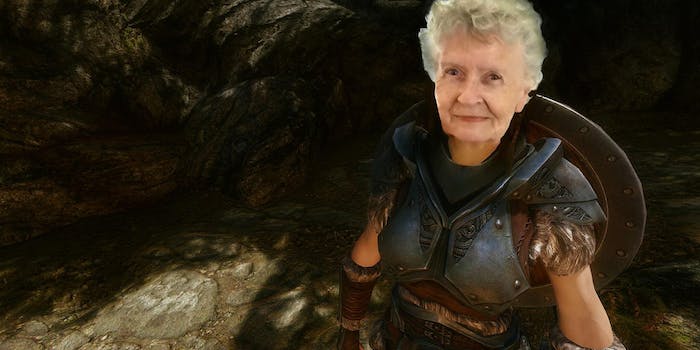 This 79-year-old grandma is our new favorite Skyrim player

Shirley Curry is proof age is just a number.

There are some YouTube stars so uniquely YouTube that all you can do is sit back and think just how lucky you are to be an observer of this once in a lifetime moment. For me (and I assume you, in a few short minutes), gaming grandma Shirley is one of those lunar eclipses in our YouTube solar system.

The 79-year-old Virginia native originally started her YouTube channel in 2011 in order to better follow the channels she loved, including Vsauce, Good Mythical Morning, and Jacksepticeye. From there, it was only a matter of time before she decided to broadcast her love of Skyrim to the world, and just last week, she uploaded her first “let’s play” video to YouTube. In a matter of days, the video hit nearly 800,000 views and tallied 3,400 comments from fans of all ages charmed by her outrageous commentary. With four more gaming uploads in the past seven days, Shirley’s subscriber count has skyrocketed to 34,000 followers. There is something just so charming about a grandma yelling in the midst of a fight with a dead army, “Yeah, down at the knees!”

Yay! I bought the game, Empyrion Galactic Survival, today!! :) Didn't have time to get it when it came out yesterday, but now it's mine! :)

Here's one square of the kind of Crazy Quilts I like to make. :) pic.twitter.com/4IW3ZxZVN3

Yes, this woman is real, and it’s in your best interest to love her as hard as you can.

She is a crucial addition to the YouTube ecosystem because she’s creating content for seniors, an incredibly underrepresented demographic on YouTube. Her videos not only show other 50-plus individuals that YouTube can be accessible but hopefully inspire them to share their passions online as well.

So until our next gaming adventure, thank you, Grandma Shirley, for proving to the world that age is just a number.