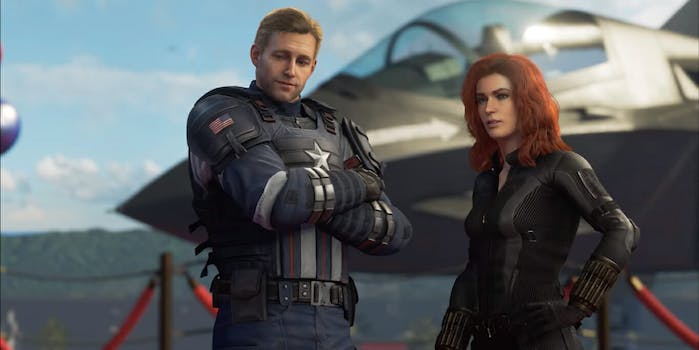 'This must be a PlayStation 2 exclusive.'

We are finally getting a video game adaptation of The Avengers—and wait, just who are these people?

Fans of the sprawling universe created by Marvel Studios have been eagerly awaiting an update on the highly anticipated game since it was announced in 2017. At E3 2019 this week, Marvel finally gave fans a look at the game, which is set to be released in just over a year on May 15.

Many fans were delighted at the news, but others took to the internet to mock the upcoming Avengers videogame. In particular, they seized upon the jarring appearance of the title characters. Fans noted that none of the characters appearing in the game look anything like their Hollywood counterparts. In fact, while the game shares the same cinematic and character styles as the MCU, none of the characters will share a likeness or a voice with the superheroes we fell in love with on the big screen.

live look at me watching Square Enix's AVENGERS game trailer at the precise moment where I realized they didn't get likeness rights for any of the actors pic.twitter.com/FMAGpV7c9p

Well, they finally announced the avengers games, oh boy, that announcement was something else, haha#SquareEnixE3 #Avengers pic.twitter.com/JdCw44Bidw

While many people still expressed excitement for the Square Enix Marvel collaboration, others couldn’t get past the look of the characters. As some fans pointed out, it had less to do with the characters looking different and more to do with how, exactly, they looked. As one Twitter user put it “I could get over them not looking like the actors if they didn’t look so damn weird.”

I could get over them not looking like the actors if they didn't look so damn weird.

They got Cap looking like an over the hill trainer at Planet Fitness.

excited to share this concept art for the new avengers game pic.twitter.com/RLcujTd2xa

Soon, the appearances of all the characters were being scrutinized. Most people couldn’t help but take a shot at the new and definitely-not-improved Captain America.

Stark must be short for Starkesian that man is Armenian

This is literally an undyed Fieri pic.twitter.com/jMzBY4N0pb

Other people couldn’t get past the plain and uninspiring looks sported by the rest of the cast. Natasha looks like a middle-aged bank teller. Bruce sports the exact same look—and even energy—of Mark Ruffalo, which really just makes you miss Ruffalo. At least Iron Man wears a mask.

She definitely called the cops the first time she saw Black Panther and Falcon outside the headquarters pic.twitter.com/OMznRwHZD8

LMAO when I first saw Thor from the new Avengers game I thought he looks like fucking Haymitch Abernathy from the Hunger Games pic.twitter.com/zkU8vcMRwM

The Avengers game probably should have distanced itself from the look of the MCU more. Having a Bruce Banner dressed and styled like Mark Ruffalo really reminds you that it’s not Mark Ruffalo. Embrace a new look.

Some people couldn’t get past the outdated look of the trailer, and others just wanted to know where the hell Hawkeye got off to.

This must be a PlayStation 2 exclusive

The Avengers game looks okay. Need to see more. Costumes are questionable. Wish they included the cast from the films. WHERE IS HAWKEYE pic.twitter.com/oBY2fdktYi

hawkeye appears in the avengers game at the pause menu, fucking off and doing something completely unrelated

There were even some brave souls who strove to “fix” the looks of the character.

While many fans are still sure to be disappointed, there is good news. We will certainly miss the actors we’ve come to love through a decade of MCU releases, but the voice cast for the upcoming game is stellar. Nolan North, Laura Bailey, and Troy Baker are only a few of the top-notch voice actors listed. The game is set to be released on PS4, Xbox One, Stadia, and PC upon release.