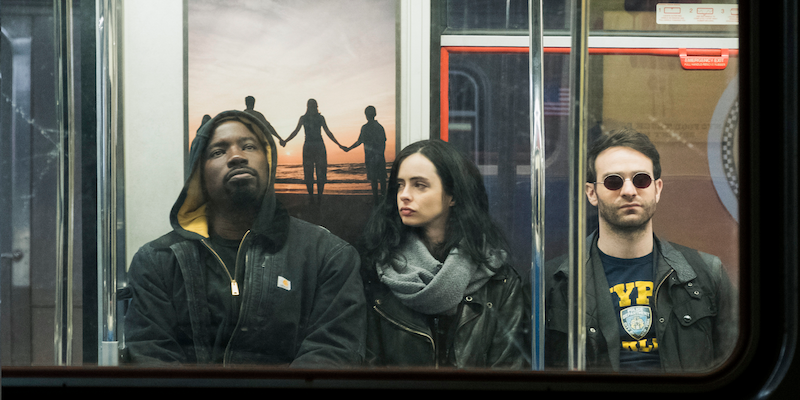 What was the point of Marvel’s ‘Defenders’?

After watching all eight episodes of 'Defenders,' was this show really worth it?

In my initial review, I rated The Defenders as a formulaic but watchable conclusion to Marvel‘s Netflix franchise. After watching all eight episodes, I now feel the need to correct the record. Defenders is actually boring as heck, and from a narrative standpoint, it doesn’t need to exist.

What is Defenders actually about? Plot-wise, it continues a storyline introduced in Daredevil and Iron Fist, pitting the four Defenders against an Illuminati-like organization known as the Hand. In Daredevil season 2, the Hand dug a gigantic hole under New York City. Led by Alexandra (Sigourney Weaver), they now want to excavate a dragon skeleton from that hole, using the bones to make an immortality-inducing “substance.” This will supposedly destabilize the city’s foundations and kill thousands, a problem the Defenders solve by… blowing up a skyscraper and dropping it into the hole. It’s the large-scale equivalent of Daredevil’s fighting style, where he constantly throws people off buildings and whacks them over the head with heavy objects, but “doesn’t kill.”

Daredevil, Luke Cage and Jessica Jones all had engaging emotional arcs for their leads, along with narrative themes tying into their powers and backstories. By comparison, Defenders is just a slow-moving slog toward a final action sequence. Once the team gets together, we’re treated to dozens of similar fight scenes and repetitive exposition, stretching out a thin plot with minimal character development.

It’s clear that Defenders happened because the franchise required a team-up, not because the showrunners had any meaningful ideas. The Hand’s quest for immortality is moderately interesting, but falters once Alexandra dies, leaving Elektra as the unexpected boss of three second-tier villains.

Defenders fails because it screws up the most basic tenet of Marvel’s Netflix franchise: low-stakes action with high-stakes emotional impact. The Hand are presented as apocalyptically dangerous, capable of razing a city to the ground. Of course, we know the Hand won’t actually destroy New York, so the show’s job is to convince us they’re still a viable threat. It doesn’t. The Hand’s generic criminal empire is less compelling than Wilson Fisk’s vulnerability or Kilgrave’s uncontrolled menace, and from a practical perspective, their military power is wildly uneven.

Every superhero story requires suspension of disbelief, but Defenders stretches credulity by pitting its heroes against a seemingly limitless army. Instead of just shooting the Defenders (or blowing up the police precinct where they handily hide all their friends in plain sight), the Hand deploys small groups of footsoldiers for hand-to-hand combat. The four Defenders—only one of whom is bulletproof—escape by using the same tactic every time: kicking their enemies and running away.

Presented with such a mismatched combination of heroes and villains, the writers strain themselves to invent scenarios where the Defenders can plausibly survive. All too often, the results feel forced. Take the final battle sequence, which happens inside a dragon skeleton hundreds of feet underground. Accompanied by a Wu-Tang Clan soundtrack, this should be memorably cool. Instead, it’s dull, and the budgetary restraints are obvious. The Defenders have to win, so the all-powerful Hand only use an easily punchable number of soldiers. The battle itself takes place in a dark tunnel, making it almost indistinguishable from the many others we’ve seen before.

Daredevil and Elektra provide the final emotional payoff by dying together in the belly of the beast—perhaps the first time Defenders makes a meaningful impact on its characters. But then in the last scene, we see that Daredevil survived after all. The NYPD miraculously decides not to arrest the Defenders for all their public fights and destruction of property, meaning everyone can go back to their lives as if nothing happened.

The best moments in Defenders were character-focused. Elektra and Alexandra’s scenes were creepy and mournful, and it was fun to see Luke and Jessica display palpable disbelief at their melodramatic new teammates. If the show had spent more time on those relationships, the Hand’s uneven storytelling wouldn’t be such a problem. Unfortunately, the writers insisted on hyping up the Hand’s fearsomeness to an overzealous degree, drawing attention to the show’s key flaws. The Hand are no more intimidating than the villain-of-the-week goons on network TV superhero shows like Supergirl. After the more authentic storytelling in Marvel’s solo series, these characters deserve better.