By the end of Jessica Jones‘s first episode, you may find yourself needing therapy and a stiff drink—much like Jessica Jones herself. Unfortunately, therapy does not seem to be on the horizon for Marvel‘s latest heroine.

Following the acclaimed Daredevil earlier this year, Jessica Jones is the second of five Marvel Netflix series aimed at an adult audience. While Daredevil was praised for its high production values and engaging emotional core, Jessica Jones knocks it out of the water. From the very first episode, it’s significantly less formulaic than any other Marvel adaptation to date. Discarding the typical superhero origin story in favor of a thoughtful and gripping psychological thriller, it may be the best thing Marvel Studios has ever produced.

Armed with super strength and a bad attitude, Jessica Jones (Krysten Ritter) is a former superhero turned private investigator. Clients hire her to find missing people and take photos of their cheating spouses, and she often falls asleep on her desk with a glass of whisky in one hand. 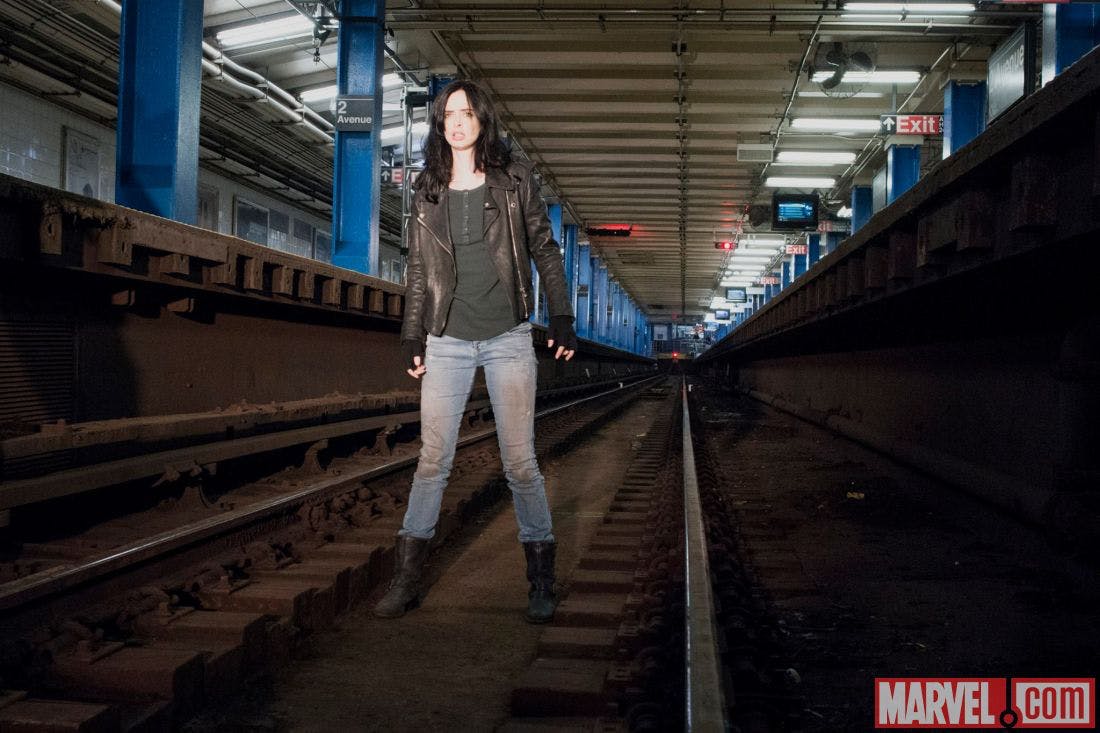 On the surface, this premise is typical noir fare. Jessica Jones even includes self-aware flourishes like jazzy credits music and a sardonic voiceover, but it’s also clearly a subversion of the genre. For one thing, that classic noir antihero role is played by a woman. Jessica is the kind of unpleasant, screwed-up female character you barely see on any TV drama, never mind a superhero show. And she’s backed up by characters like Jessica’s strong-willed best friend Trish Walker (Rachael Taylor) and hard-nosed lawyer Jeri Hogarth (Carrie Ann Moss), who is cheating on her wife with her secretary. There’s a wealth of complex, realistic female characters here, and unlike every other Marvel Studios adaptation, the only white guy in the main cast is the villain.

David Tennant’s Kilgrave is legitimately terrifying and impossible to compare to any other comic book villain. Gifted with the ability to control people’s actions and desires, he is the walking embodiment of a fate worse than death. He can force people to kill themselves or commit hideous crimes, a loss of control that Jessica knows from personal experience. As one of his victims (in his eyes, the one that got away), her PTSD colors every scene with stress and paranoia.

The topic of mind control has already been explored in the Marvel Cinematic Universe, first with Loki’s control over Hawkeye in The Avengers, and later with HYDRA’s decades-long brainwashing program for the Winter Soldier in the second Captain America movie. Neither film had enough time to explore the concept in much depth, but Kilgrave takes the horror of mind control to its most disturbing extreme. He’s fiendishly abusive, a sadistic manipulator whose only desire is to entertain himself. For the first few episodes, his menace is illustrated almost entirely through the effect he has on others—and that’s enough. 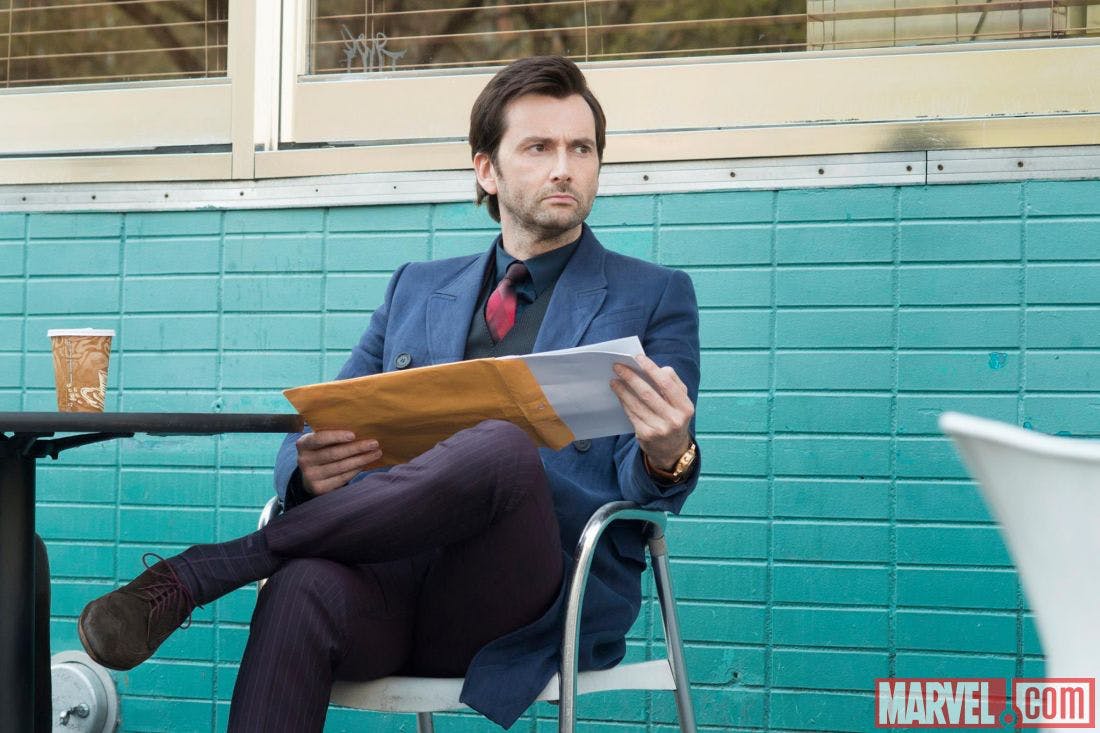 Going in to Jessica Jones, Kilgrave was my main concern. His superpower is essentially a rape metaphor, and his goal is to stalk and torment the show’s heroine. It’s a combination that could well have gone horribly wrong. Luckily showrunner Melissa Rosenberg and her team of writers took this very seriously, resulting in an extraordinarily intelligent depiction of psychotic male entitlement (Kilgrave) and the daily grind of survival (Jessica).

This is where Krysten Ritter’s performance shines. With a casting choice like David Tennant, you’d expect the show to give him a few juicy scenes to introduce Kilgrave. Instead, we see him through the lens of Jessica’s PTSD, which manifests as a constant simmering rage (a bad combination with super-strength), paranoia, and a serious drinking problem.

If this sounds like it shapes up for a grim, nail-biting experience, you’re right—but that doesn’t mean the show is humorless. After a gripping first episode, the tone lets up enough for Ritter to utilize her experience as a comedic actress. We’re also introduced to side-characters like Jessica’s neighbors (a drug addict and a pair of delightfully weird siblings), who help to give her life a far more three-dimensional tone than the bizarrely unrealistic New York of Daredevil. 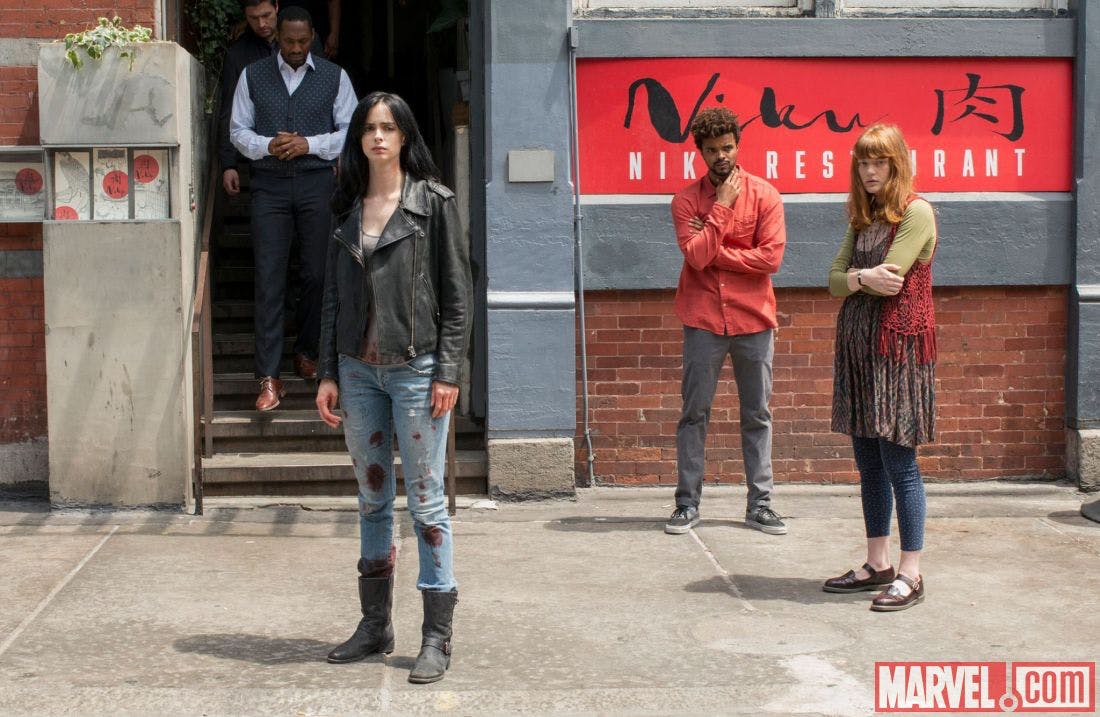 Alongside Ritter and Tennant, the supporting cast is predictably excellent—a consistent strength for Marvel Studios, even among their weaker properties. Mike Colter is particularly well-cast as Luke Cage, replicating the laconic cool of the comic book character. He and Jessica share the first real sex scenes of the Marvel franchise, without the hearts-and-flowers context of your typical superhero/love-interest pairing. But really, the most important relationship is between Jessica and Trish Walker, a moving depiction of a strained but supportive friendship.

In a whole host of ways, Jessica Jones provides what fans have long been looking for in the superhero genre. It’s dark without resorting to hyperviolence or gritty clichés. It’s a female-led story that doesn’t fall back on girl-power motifs or sexualization. Perhaps most importantly, it’s a sophisticated adult drama that doesn’t deny its comic book roots. Jessica Jones won’t play to all of Marvel’s existing audience, but its emotional depth and unpredictability are sure to make their mark.