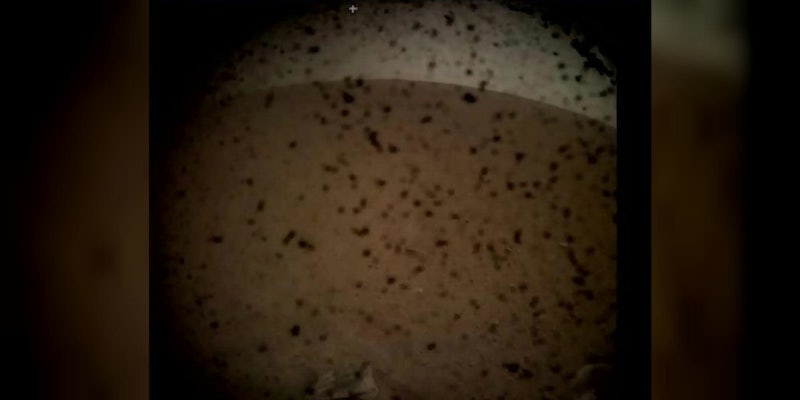 NASA’s InSight just sent over some photos of Mars

It's a new frontier.

NASA‘s InSight probe successfully made landfall on Mars late Monday. Not long after landing, the probe fired off a few photos of its new home, giving those of us here on Earth a look at the red planet—and the future.

My first picture on #Mars! My lens cover isn’t off yet, but I just had to show you a first look at my new home. More status updates:https://t.co/tYcLE3tkkS #MarsLanding pic.twitter.com/G15bJjMYxa

The first photo was snapped before the probe had removed its lens cover, so it mostly showed the grit and grime likely picked up in the landing process. Still, the photo is an incredible piece of history, giving us our first look at Mars through the lens of the most advanced stationary probe to touch down on the fourth planet from the sun.

The second photo posted to InSight‘s social media feeds shows the planet from the perspective of the probe. “There is a quiet beauty here,” the photo’s caption reads. “Looking forward to exploring my new home.”

It may not be the most captivating photo of all time, but it captures something truly groundbreaking. It’s Mars! An unmistakably jarring and vast planet that humans are only beginning to explore.