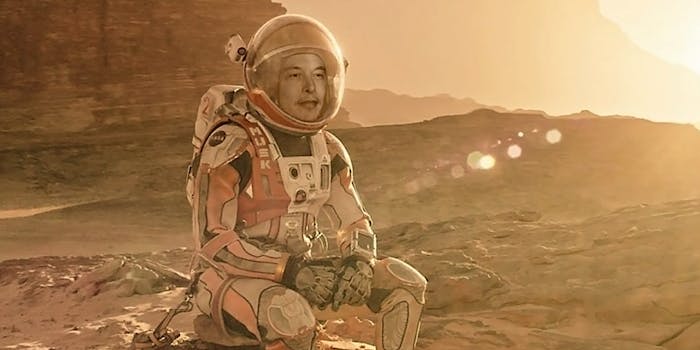 'I know exactly what to do.'

More than five years after Elon Musk declared that he wants “to die on Mars, just not on impact,” he doubled down in an interview with Axios on HBO on Sunday. He gives himself a 70 percent chance of getting there.

“I know exactly what to do. I’m talking about moving there,” he said.

This a day before NASA’s probe, InSight, was set to touch down on Mars.

As Musk told Kara Swisher on the Recode Decode podcast, the Tesla and SpaceX CEO is still pursuing the Big Falcon Rocket Mission to Mars in 2024: “I don’t know if I will go or not. It may be just an unmanned mission, you know. I’m not sure if there’ll be people onboard or not. Hopefully, there are people on board. But I think there’s a pretty good chance of at least having an unmanned craft go to Mars. I think we will try to do this.”

While Musk seems to be sure in his daring decision, according to the Guardian there have been more probes sent to Mars than any other planet and half of these missions were unsuccessful. The Guardian notes that it’s wildly dangerous to land on the surface.

John Logsdon, a space policy expert, told Business Insider last year that he’s apprehensive about Musk’s ambition and murky plans: “There are so many questions on the viability of this plan.” According to Vox, Musk has no strategy to salvage voyagers from radiation extinction before even reaching the red planet and the issues on “human body from atrophying over the course of an 80-day trip in zero gravity.”

It may be PR hype for Musk’s ongoing projects, but he did tell Axios that “recent developments” are making him more excited than ever for dying on Mars.