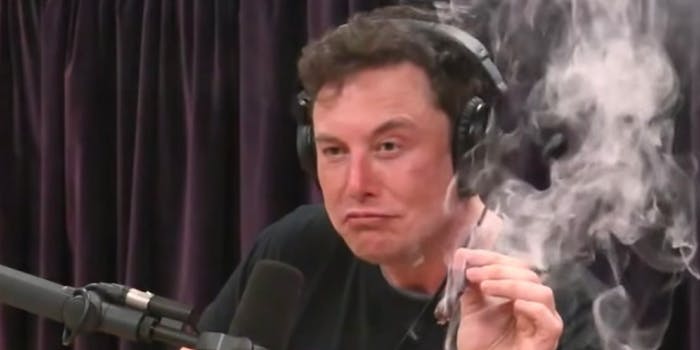 NASA is also conducting a safety review of Boeing.

NASA is looking into the safety habits at SpaceX after some officials were disgruntled to learn of Elon Musk’s now-infamous weed smoking, the Washington Post reported on Tuesday.

The agency hasn’t specifically called out Musk’s behavior, and Boeing will go under review as well. But a NASA spokesperson told the Post that its plan is to “ensure the companies are meeting NASA’s requirements for workplace safety, including the adherence to a drug-free environment.”

NASA Administrator Jim Bridenstine, meanwhile, said that “culture and leadership start at the top,” which seemed like a veiled comment about Musk.

Responding to NASA’s plans to conduct a review, SpaceX said in a statement that “human spaceflight is the core mission of our company. There is nothing more important to SpaceX than this endeavor, and we take seriously the responsibility that NASA has entrusted in us to safely and reliably carry American astronauts to and from the International Space Station.”

The SpaceX and Tesla CEO’s illicit activity also reportedly came under scrutiny by the Air Force. As Engadget notes, anyone with government security clearance is prohibited from using illegal drugs, including marijuana.

Musk smoked a joint and drank some whiskey on Joe Rogan’s podcast in September before saying, like so many stoned people before him, that he thinks “people should be nicer to each other.”