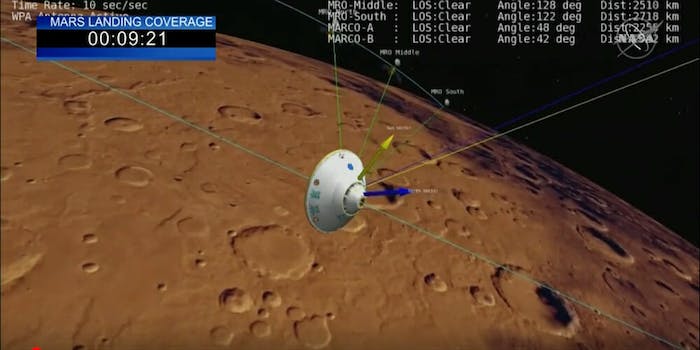 After seven months of traveling in space, NASA’s InSight probe has successfully landed on Mars. InSight is set to go further into the interior of Mars than any other spacecraft in history.

I feel you, #Mars – and soon I’ll know your heart. With this safe landing, I’m here. I’m home.
#MarsLanding https://t.co/auhFdfiUMg

Unlike the Curiosity rover, which landed on Mars in 2012, InSight is a probe focused on the interior of the planet. (InSight is an acronym for Interior Exploration using Seismic Investigations, Geodesy and Heat Transport.) The probe is being celebrated online by the science community as a revolutionary breakthrough in space travel and Mars exploration.

InSight sends a photo from its new home. pic.twitter.com/V6AlxLS8Ip

The landing of InSight is an important historical moment for many reasons—like this impressive celebratory handshake in NASA’s control room.

Historians will remember this handshake for decades to come #MarsLanding pic.twitter.com/smd372FBmu

InSight’s landing marks a promising future for further American exploration of space. This, of course, prompted some cynical commentary.

How exciting it must be for you to see surface photos of a planet you haven’t screwed up. #MarsLanding

President Donald Trump said on Monday that he didn’t believe a recent U.S. climate report warning that the Earth is deteriorating rapidly and might result in the death of thousands. Several people drew comparisons between Trump’s comments about Earth and the recent accomplishment on Mars.

When #Trump comes out to promote American exceptionalism because of @NASA landing on Mars (a genuinely incredible achievement), he is supporting science. But he is not prepared to back the science of #ClimateChange because it doesn’t match his divisive narrative.#MarsInsight

Meanwhile, on Earth, the same day we landed on Mars. https://t.co/JsPKfRZYkM

Such a sad contrast. At the exact same time NASA experts are celebrating a successful landing on Mars, Trump is dismissing a new climate change report. "I don't believe it."

The new probe will take a few months to place instruments on the surface of Mars and will study the planet from one stationary spot, according to NASA. InSight is expected to study the planet beyond its surface for the next two years.