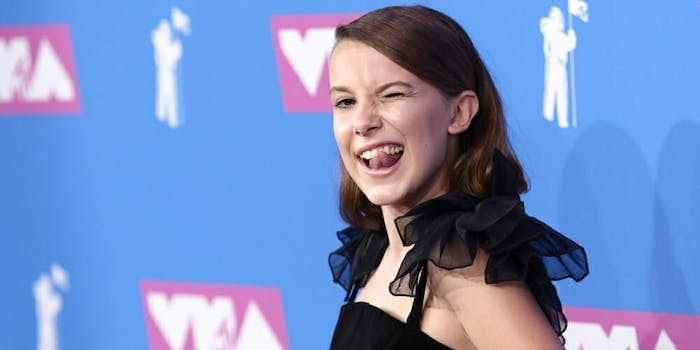 Marvel Studios President Kevin Feige initially skirted around questions about the young actress joining the ranks of Captain America and Spider-Man. During a press event for Spider-Man: Far From Home, however, Feige addressed rumors that Brown, along with Rogue One‘s Donnie Yen, might join the MCU.

“Both good actors that would be fun to see in the MCU,” he said. “But nothing specific, or nothing to talk about.

“We’re still, as I’ve said for the better part of a year or two, we’re waiting for Endgame and Far from Home to come out before we talk about what’s next, officially,” he added. “We’re almost there.”

If rumors are true, Brown could join Angelina Jolie and Kumail Nanjiani on the set of upcoming Marvel flick The Eternals. The people at Marvel are keeping any news of Brown’s potential character under wraps, but fans are speculating that Jolie will portray the matter-rearranging heroine Sersi. Speaking of Cersei, Game of Thrones’ Richard Madden is rumored to be joining the cast as well. There is even speculation that Keanu Reeves will join the cast, but we’ll stifle our excitement until it’s certain.

While Brown is getting to know to her A-list co-stars, Yen will reportedly begin work on Shang-Chi. No one is complaining about the MCU unveiling it’s first Asian superhero, particularly when it involves the “Master of Kung-Fu.”

Brown’s history filming Netflix’s Stranger Things cemented her in viewers’ minds as prime superhero material. Her portrayal of Eleven—strange telekinetic abilities and all—revealed her as an excellent choice for Marvel’s growing cinematic universe. With season 3 of the hit show about to hit the streaming platform, fans are sure to be even more excited about her potential Marvel debut.

Unfortunately, we won’t know anything for sure until Spider-Man: Far From Home hits theaters. The second MCU Spider-Man flick hits theaters on July 2—just two days before Stranger Things season 3—so thankfully we don’t have long to wait.