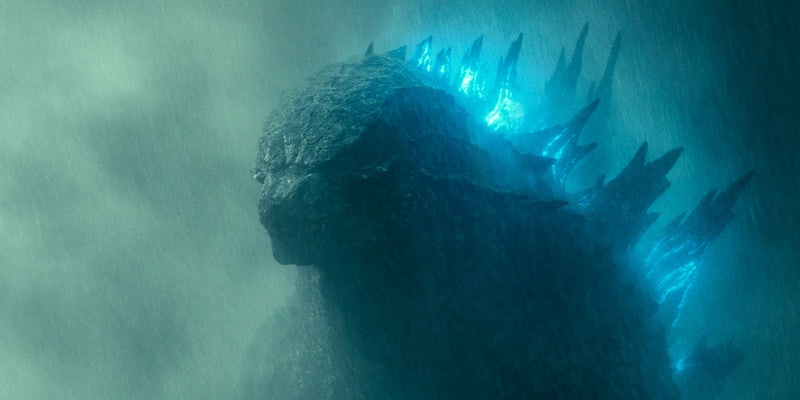 Godzilla: King of the Monsters

‘Godzilla: King of the Monsters’ is a by-the-numbers disaster movie

Sixty-five years into the Godzilla franchise, it feels almost unfair to compare new movies to the original. No one expects a $200 million blockbuster to have much in common with a black-and-white movie from 1954, but it’s still jarring to remember the first Godzilla—a somber drama that echoed the grief of Hiroshima and Nagasaki—alongside something like Godzilla: King of the Monsters. Like so many American action movies, it views nuclear bombs as the source of an exciting explosion, with moral qualms and radiation sickness as mostly forgotten footnotes.

Godzilla: King of the Monsters

The big fella returns to fight his old friends.

Directed by Michael Dougherty, King of the Monsters follows Gareth Edwards’ 2014 Godzilla, which featured stunning visual effects but rather annoying human heroes (Elizabeth Olsen and Aaron Taylor-Johnson). Sally Hawkins and Ken Watanabe’s cryptozoologist characters are the only holdovers, as the franchise shifts focus onto the monster-hunting agency Monarch. With Godzilla vs. Kong on the way, the film shoehorns in as many references to Kong: Skull Island as possible, with Monarch as its version of Marvel’s S.H.I.E.L.D.

Our heroes this time around are the estranged couple Mark and Emma Russell (Kyle Chandler and Vera Farmiga) and their daughter Madison (Millie Bobby Brown). After their son died in the 2014 Godzilla attack, Mark had a breakdown while Emma became a workaholic, inventing a device that communicates with Godzilla using bioacoustics. Monarch hopes to use this against the various “titans” hibernating around the world, including Godzilla’s old pals Mothra, Rodan, and the three-headed dragon Ghidorah. However, this plan is interrupted when eco-terrorist Alan Jonah (Charles Dance) kidnaps Emma and Madison.

This premise owes a lot to Die Hard, with Chandler as the quintessential all-American dad while Dance plays to type as a generic English villain. As a heroic everyman, Mark repeatedly outwits the experts, offering salt-of-the-earth advice and picking up a gun when the army fails to rescue his family. Technically he’s a Monarch scientist too, but his true role is clearly Dad, right down to a subtly anti-intellectual goof where he mispronounces “Ghidorah.” The main cast members all outshine their material, which involves a lot of corny dialogue where characters state the obvious. “Dude hates titans,” remarks a soldier when Mark storms out of the room as if we couldn’t guess this from context clues.

Paint-by-numbers casting aside, we know what we’re really here for: monsters. The trailers made me optimistic for the sheer visual spectacle of showdowns between Godzilla and friends, but the reality was disappointing. While there are plenty of epic moments for the titans, they’re outweighed by the film’s addiction to murky CGI landscapes.

Like many recent blockbusters, King of the Monsters obscures its battle scenes in a cloud of computer-generated fog. It’s an aesthetic that makes you crave the old-school techniques of something like Jurassic Park, but I’m not here to make a Luddite argument against CGI. The execution is the problem, not the format. Just think back to Pacific Rim, another CGI-heavy kaiju movie. Every frame is a pleasure to watch because Guillermo del Toro has an eye for color and a personal interest in design. Meanwhile, King of the Monsters clearly spent a lot of time making Mothra look cool, but its cityscapes and indoor locations could be from any disaster movie of the past decade.

Climate change allegory is another thing King of the Monsters has in common with Pacific Rim. While Pacific Rim depicted a clash between different ways of handling a slow-moving apocalypse, King of the Monsters is more direct. In fact, it implies that Godzilla can literally solve climate change. Everyone in the movie agrees that Earth is screwed, but they have different views on how and why.

Watanabe argues that Godzilla is a benevolent force and that the “good” titans bring balance against the bad ones like Ghidorah. There’s also a suggestion that Godzilla’s radiation encourages new wildlife to grow. Meanwhile, the villains are accelerationists, attempting to combat overpopulation with a monster-induced genocide. Overall, the film’s politics are pretty muddled. Unlike the original Godzilla, which was deadly serious in its use of atomic imagery, King of the Monsters has an irritatingly facile attitude to real-world problems.

The Godzilla franchise is as unstoppable as its title character, so this one will probably do well at the box office. However, it’s certainly not an all-time great for the kaiju genre. Recent years gave us Shin Godzilla (a Japanese reboot with satirical undertones) and Colossal (a brilliant indie drama starring Anne Hathaway), and if you’ve not seen Bong Joon-ho’s The Host, then you should. Godzilla: King of the Monsters offers little more than your average disaster movie, although Godzilla completists will enjoy the extensive screentime for old favorites like Mothra.