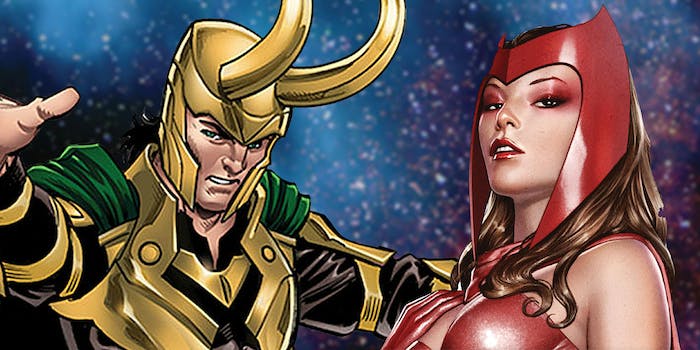 Tom Hiddleston and Elizabeth Olsen would reprise their roles.

Disney is looking to bring some of Marvel’s biggest characters to its standalone streaming service, according to a new report from Variety.

We already have numerous Marvel TV shows on ABC and Netflix, and we even have a bit of Marvel Cinematic Universe crossover with Agents of S.H.I.E.L.D. and Agent Carter. But the latest move from Disney, which is reportedly in the early stages of planning, would give characters like Loki and Scarlet Witch their own limited series (which would be approximately six-to-eight episodes).

However, there are several factors distinguishing these shows from previous TV counterparts. For one, the actors portraying them—in this case, Tom Hiddleston and Elizabeth Olsen—would reprise their roles. Marvel would also focus on smaller stories involving superheroes who don’t already have their own standalone movie.

Marvel Studios, not Marvel Television, would handle production on those TV series with a hefty budget.

It’s possible that Loki and Scarlet Witch’s names being thrown into the mix have confirmed their Avengers 4 fates (they are both dead by the end of Infinity War), but their respective series could also be prequels.

While existing Marvel TV shows are technically part of the MCU, looping Marvel Studios and some of the film’s superheroes to television would likely give the larger MCU a more interconnected feel. Plus, with the limited episode count and scope, it could bring some of Marvel’s more beloved stories—for instance, Matt Fraction and David Aja’s beloved Hawkeye run—a chance to make it to more screens.

Disney’s streaming service is tentatively set to launch in late 2019.