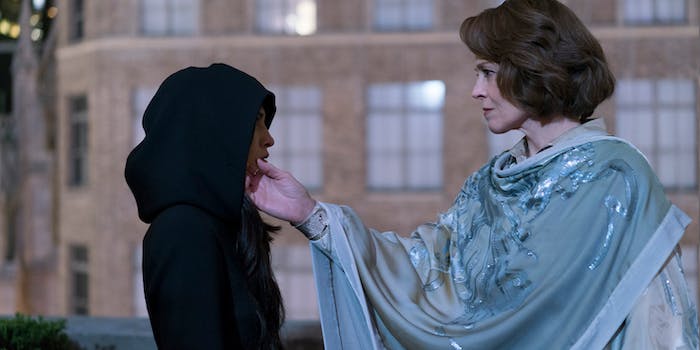 Meet the woman who suits up Marvel’s superheroes on Netflix

Stephanie Maslansky designed the costumes for all four Marvel Netflix shows, and 'Defenders' was the most interesting challenge yet.

Stephanie Maslansky designed the costumes for all of Marvel‘s Netflix shows, culminating in The Defenders this year. It’s a uniquely ambitious project from a costuming perspective, blending contemporary fashion with callbacks to the comics. Each show has its own aesthetic and creative team, but they had to fit together for The Defenders miniseries.

The Defenders arrived with a new challenge: designing the costumes for Sigourney Weaver‘s character Alexandra. As a new villain with no basis in the comics, Alexandra allowed for a lot of creative freedom, and Masklansky delivered. Her metallic capes and timeless billionaire chic were a highlight of the show, tapping into the character’s supernatural backstory. We caught up with Maslansky for a chat about the Defenders and their enemies, and how costuming played into the show’s visual storytelling.

Only one of the four Defenders has a traditional superhero costume, but each of them has a really distinctive look. Could you tell me about devising the looks for characters like Luke and Jessica, and how that carried over into Defenders?

I wanted to convey that the clothes give them an emotional strength and protection, rather than necessarily a physical protection. That was partially conveyed in Daredevil’s first vigilante look, which was black top-to-bottom. Obviously it didn’t protect him from knives and bullets, and as a result of that he discovered that Wilson Fisk had his suits lined with bulletproof fabric. It came about in a really practical way, in a way that transcends fantasy.

For Jessica Jones as a female who’s been sexually traumatized… she definitely uses her badass motorcycle jacket and boots and ripped jean as an emotional protection for herself. Iron Fist has gone through a variety of looks, which have included suits and kind of high-tech sweatshirts and sweatpants, as opposed to Luke Cage, whose a working class hero so he wears very classic Carhartt sweatshirts and jeans and boots. But they all kind of bring a different authenticity to their character.

I was interested to see how much the color scheme came into play in Defenders. Daredevil has this red lighting, and Jessica in purple. Did I detect some hints of that in costumes for other characters when we’re in each of those scenes?

You know, filmmaking is a really collaborative effort. Costumes, production design, props, lighting, photography… there’s so many elements to it. Our director of [episodes] 1.01 and 1.02, S.J. Clarkson, was the who came up with the idea of creating color palettes for each of the four superheroes, and also another one for the Hand, which initially started off as white, and I kind of evolved that myself. I added neutral and metallics to give us a little more dimension.

Daredevil, his particular color palette is tones of red, Jessica Jones tones of blue and purple, Luke Cage tones of gold and other fall foliage colors, and then for Iron Fist tones of olive and green. So whenever we were focused on one particular superhero, you could see in the light, in the production design, that very specific color. For example, Daredevil would always wear a tie that was flecked with red, and I found a really great coat for Karen Page that had red lining around the collar and lapel. When one character crossed over to another character’s realm, we would try to subtly bring in a little bit of the color that the character was stepping into.

In the Chinese restaurant scene, depending upon which superhero is speaking, and where the camera is pointing, if you look at the background behind that superhero you’ll see murals that reflect the color of that superhero’s world. We tried very hard to stick to our color palette, and I think ultimately it was very successful.

I’m glad you mentioned the color scheme for the Hand, because obviously I’d love to hear about Sigourney Weaver’s costumes. It seems like it was a real gift to be able to create this original character where costumes are such an important part of her introduction. She’s clearly very wealthy, and she has this style that seems timeless, because she’s immortal. Could you tell me about how you designed her character?

That’s a really good way of putting it, she is timeless because she’s immortal. And I kind of operated under the same circumstances for Bakuto and also for Madame Gao. They’re all potentially thousands of years old, so I liked to keep classic silhouettes, and particularly with Sigourney because she’s a woman and I could get really flavorful with her.

At the top of episode 1.03, she’s eating in a Turkish restaurant and remembering her time in Constantinople, and I loved what we were able to find for her to wear. It conveyed an era that’s very far in the past, with a bit of gold and embroidery. I wanted [Alexandra’s costume] also to be very lush and rich. I mean, she’s a very wealthy woman and her clothes are very high-end. I won’t lie about that. We used fabulous designers.

It was interesting to see her opposite Elektra because Elektra’s got this physicality to her, she’s very much an action character. In the comics she has a very recognizable look, but it’s often quite highly sexualized. Then in the show you’ve managed to make her recognizable as Elektra, but it’s also very modest, and it’s kind of graceful and menacing rather than being particularly similar to what we’ve seen before.

I mean, this is 2017, we didn’t want to sexualize her in that way. Believe you me, I love sexy clothes and I love, you know, sultry feelings and sensibilities, but I didn’t care to sexualize this character in the way that it was in the comics. We wanted her power and strength to be manifest in a much different way.

One of the things we added was the coat she wears almost thoughout the entire season. We designed the coat so that it would be really stunning and interesting when she fought. Her skill is so phenomenal as a fighter that we wanted the coat to be able to fly and dance. It’s very fitted to the waist, and then the bottom half is almost a full circle, and it was lined with beautiful deep red silk so when she did move around, the coat would flutter in a way that you could see underneath it. It was really fun to work with stunts on this and choreograph things where the coat would move along with the movement of the stunts.

She did look very otherworldly… but at the same time it was possible for her to blend in. I was going for a French Lieutenant’s Woman, Matrix kind of silhouette.

Just to move back in time through the franchise, I’d like to talk a bit about Luke Cage’s hoodie. It was such an evocative image, the bullet-hole hoodie. I’m assuming that was something that came up in the script from the showrunners… what were the conversations like between you about that?

Unfortunately due to the horrible tragedy that was Trayvon Martin and all the other shootings of young African American men and women that have been happening in the last few years, it was an incredibly timely moment for it to be chosen that Luke Cage’s costume would be a hoodie. It kind of made sense, it’s a working man’s hero kind of a garment. A hoodie is something that working men have been wearing ever since they were invented. So it was not unusual for us to pick something like that, it just wound up being so freighted with meaning due to the circumstances of life at that time. And the fact that Luke Cage is bulletproof and constantly getting shot up by idiots who didn’t get the memo, his look has almost become that classic iconic shot-up hoodie. The notion of a bulletproof black man in a hoodie is really just weighted with a lot of meaning.

Finally, on the topic of collaboration, you’ve said that people have a lot of different inputs into the costumes. Are there any particular details that the actors brought into it that you found interesting?

Absolutely, it’s very collaborative and the actors constantly bring information to the party. You want to get to a place where the actor puts on the costume and says yes, that’s me, that’s my character in there. You wind up being part psychologist, part costume designer. It can be difficult at times, but ultimately there’s practical reasons to have actors wear certain things, certainly the fact that our show is so heavily into stunt work. On our show, you have to make sure anybody is able to fight at the drop of a hat.