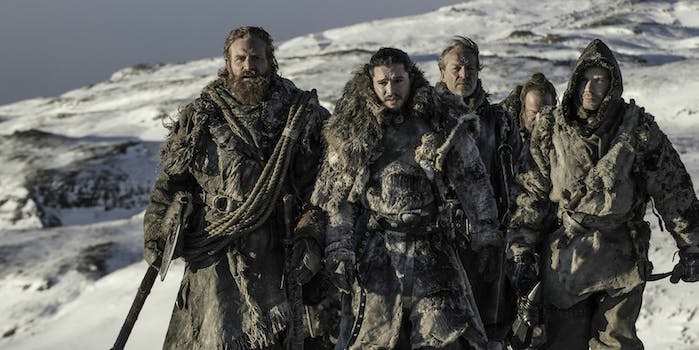 It was a jam-packed episode.

Warning: This story contains spoilers for the most recent Game of Thrones episode “Beyond the Wall.”

Pretty much everything in Sunday night’s episode of Game of Thrones was overshadowed by the very sad demise of Daenerys Targaryen’s dragon Viserion (and his shocking resurrection by the Night King).

We’re still trying to wrap our heads around it. But while we contemplate what it means that the Night King has a deadly new weapon, let’s take a look at some of the other important moments in this super-sized episode.

Before we had an ice dragon to worry about, the giant polar bear that attacked our band of heroes was just about the scariest resurrected creature we’ve encountered north of the Wall. Its sheer size made it difficult for a dozen armed men to handle, and before they could bring it down, it badly mauled the red priest Thoros. Beric Dondarrion, Thoros’ longtime companion as the leader of the Brotherhood Without Banners, attempted to cauterize his wounds. But as Jon, Beric, the Hound, Jorah Mormont, Tormund Giantsbane, and Thoros waited for help, Thoros succumbed to his injuries and the bitter cold. Thoros has resurrected Beric a total of six times with power granted to him by the Lord of Light, but now, as the Hound noted, Beric is on his last life.

2) The Mormont family sword will stay with Jon Snow

Early in the episode, the small band of men cut through the boredom of the barren north by getting to know each other. Jon confides that he looked up to Jorah’s father, Jeor Mormont, the late Lord Commander of the Night’s Watch. Jeor thought highly of Jon and even left him his family’s ancestral Valyrian steel sword, named Longclaw. Valyrian steel is rare and highly valued in the Seven Kingdoms, and now that it’s a known way to kill White Walkers, the blade is priceless. Jon offers the sword back to Jorah, in a gesture of respect to his family’s heritage. But Jorah, who was exiled from his home and family for selling poachers as slaves, tells Jon he gave up his right to the sword and respects his father’s wishes that Jon have it instead. The Stark family had its own ancient sword, appropriately named Ice, but after Ned Stark’s execution, it was melted down and made into two smaller blades by the Lannisters. Brienne of Tarth now carries one of those blades, named Oathkeeper, given to her by Jamie Lannister.

3) Tormund confirms he has a crush

Tormund’s crush on Brienne of Tarth has been a kind of running gag in the show—especially after fans latched on to the unexpected pairing last season. While Brienne has been the unfortunate butt of jokes about her unladylike height all her life, that’s exactly what Tormund admires about her. In his own crude way, he waxes poetic to the Hound about wooing her. “I want to make babies with her,” he says. “Think of them—great big monsters. They’d conquer the world.” Of course, the Hound had his own run-in with one of Westeros’ fiercest fighters. Brienne bested the Hound and left him for dead back in season 4.

4) The source of Jon’s cryptic quote, “The shield that guards the realms of men.”

Beric Dondarrion and Jon Snow are the only two people on Game of Thrones to be resurrected by the Lord of Light. That connection isn’t lost on them as they travel into the barren north together. They both face huge existential questions about why they returned, and what purpose they’re supposed to serve. For Beric, it’s as simple as fighting for life—and for the living. “You and I won’t find much joy while we’re here, but we can keep others alive. We can defend those who can’t defend themselves,” Beric tells Jon. Slowly, Jon recites, “The shield that guards the realms of men.” It’s a line from the vows he took as a new brother of the Night’s Watch, but for Jon, that promise now applies on a much larger scale.

5) Sansa is not playing into Littlefinger’s plans

For now, it seems Littlefinger’s plan to set the Stark sisters against each other is working. Arya is still livid after discovering (with the help of Littlefinger) a letter Sansa wrote calling Ned Stark a traitor and asking her brother Robb to pledge his loyalty to then King Joffrey. Robb and Catelyn Stark saw immediately that Cersei Lannister was using Sansa, but all these years later, Arya seems to consider it evidence of Sansa’s betrayal. Yet despite Sansa’s growing fear of her little sister (what kind of psycho keeps a bag full of human faces?), she ignores Littlefinger’s advice to keep Brienne close as her bodyguard. Littlefinger may hope a skirmish between Brienne and Arya would get rid of one uncontrollable Stark sister, but Sansa seems unwilling to test that notion. Instead, she sends Brienne south to King’s Landing as her representative.

6) Benjen gets the closure he deserved

Benjen Stark, Ned Stark’s younger brother, was one of the first characters to seemingly meet his doom on Game of Thrones back in season 1. He disappeared while on a mission beyond the Wall and was presumed dead. That is until he came to the rescue of Bran Stark and Meera Reed, revealing that the Children of the Forest had saved him from turning into a wight—although he wasn’t quite alive anymore. On Sunday, Benjen swooped into action again to save another one of his nephews, Jon Snow, after Daenerys Targaryen was forced to retreat with her remaining two dragons (RIP, Viserion). The Game of Thrones showrunners said after the episode that this act gave Benjen (also known as Coldhands on the show) closure. After being trapped in a sort of purgatory somewhere between living and dead, Benjen was able to go out saving a life, like a true brother of the Night’s Watch.