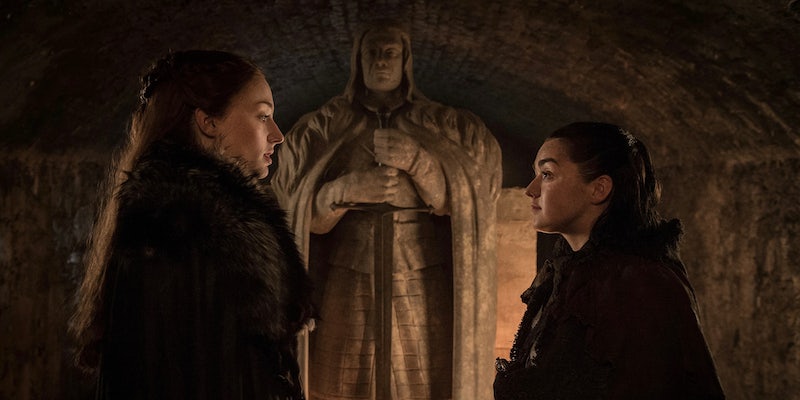 Arya's missing much of the picture.

Warning: This article contains spoilers for the latest Game of Thrones episode, “Eastwatch.”

Petyr Baelish may have finally met his match at Winterfell after Sansa Stark started ignoring his council, Jon Snow saw right through him, and both Bran and Arya Stark—each in their own way—spooked him. But as he demonstrated in the latest Game of Thrones episode, Littlefinger still has at least one more trick up his sleeve.

A couple of episodes ago, we noticed Littlefinger turn his head after Maester Wolkan mentioned how Maester Luwin kept and catalogued every single piece of correspondence that arrived at Winterfell. In “Eastwatch,” it paid off as Arya uncovered a letter we haven’t seen in years hidden in Littlefinger’s quarters. She’s been spying on Littlefinger for the better part of the day, leading her to snoop around his room for a letter he asked for on Sansa’s behalf.

Sure enough, Arya found it hidden under his bed. It’s a letter from Sansa to her brother Robb revealing that their father had been arrested for treason. Sansa urged Robb in the letter to ride to King’s Landing to bend the knee to Joffrey. As Arya left the room, Littlefinger watched her, hidden in a dark corner.

If it sounds familiar, it should. Although we weren’t shown the contents of the letter at the time, we’ve seen it before.

After Ned Stark’s arrest toward the end of season 1, Lannister guards went to grab Sansa and Arya in the episode “The Pointy End.” Although Arya escaped with Needle in hand, Sansa didn’t get very far and was taken to see Cersei Lannister, who informed her that Ned is a traitor. Grand Maester Pycelle doesn’t trust Sansa because she’s now the daughter of a traitor, but Cersei knows that Sansa is innocent. Instead, she tasked Sansa to write a letter to Robb and Catelyn Stark and call for Robb to bend the knee to Joffrey Baratheon.

Sansa is, understandably, confused about the whole ordeal. She knows that Ned is a good man, so like any dutiful daughter, she believes she can reason with him. She’s not trying to play the game yet; she’s just trying to save her father. But Cersei, a master manipulator against those much less experienced, uses Sansa’s feelings for her son Joffrey not only to make her feel guilty, but to pressure her by making her believe Ned’s fate depended on both Robb and Sansa. So Sansa took the quill and started writing.

Robb and Maester Luwin discuss the letter some time later, and while Robb asked if Sansa really wrote the letter, Luwin saw right through it. He knew who really wrote it, no matter whose handwriting was on the scroll. Robb did head south, but he called all of his bannermen to travel with him.

So did Catelyn. Robb showed her the letter when they reunited later in the episode after she departed the Eyrie (demonstrating that sudden speed of travel isn’t just a season 7 construct). Catelyn did not appear to receive a letter from Sansa herself on-screen, instead reading one from someone else summarizing the events. (Likely from Robb or Maester Luwin.)

Robb took the letter Sansa gave him when he road south so he could show Catelyn for himself—and he never returned.

However, there is a copy of the letter at Winterfell. We know because not only did we see it, but Maester Wolkan found it after searching through Maester Luwin’s very thorough archives.

“You’re sure this is the only copy in Winterfell?” Littlefinger asked Maester Wolkan after receiving it.

We doubt the Freys sent all of Robb’s personal belongings back to Winterfell after his death, but this doesn’t necessarily mean there’s a giant plot hole here. It’s possible that Robb could’ve sent the letter back to Winterfell at some point before his death. Or, given that Maester Luwin was so meticulous with his archives, he could have made a copy of the letter to give to Robb when he traveled or to keep in his records.

Is this Littlefinger’s end game?

As we see after Arya left Littlefinger’s room, Littlefinger was watching the entire time. It’s very likely that he meant for her to find that letter.

It’s not the first time he’s noticed Arya. According to Aidan Gillen, Littlefinger recognized Arya when she was serving Tywin Lannister and Littlefinger at Harrenhal but didn’t say anything about it at the time. This time he chose to feed her some select pieces of out-of-context information for a very important reason: to create some chaos at the Stark sisters’ expense.

Littlefinger couldn’t bribe Bran like he could Robin Arryn. He can’t control Arya like he used to manipulate Sansa—and he’s seen what she’s capable of. He couldn’t reason with Jon, who doesn’t like him anyway. So while Jon is away, Littlefinger has come out to play his hand.

Littlefinger was there as a member of the Small Council when Cersei ordered Sansa to write that letter. And no only only was Littlefinger present, he’s the person who suggested that Sansa write it.

Maester Luwin and Catelyn both saw through Sansa’s words, but Arya might not have such an easy time. She’s not as adept at playing the political game as other characters, and she knows that Sansa is tempted to take the North from her half-brother (but actual cousin) Jon Snow after the Northern lords offer it to her. If Jon doesn’t come back, she’ll need the support of the Northern lords to take it.

“You’re thinking it right now,” Arya told Sansa. “You don’t want to be, but the thought just won’t go away.”

As we see in next week’s preview, their tension—probably also stemming from years of not getting along—only grows.

“I don’t want to frighten you, but I won’t lie to you, either,” Ned told Arya back in season 1. “We’ve come to a dangerous place. We can’t fight a war amongst ourselves.”

At the time he was referring to Arya and Sansa’s constant bickering in King’s Landing, but it could just as easily apply to the Stark sisters now. Most of all, they have to trust each other.