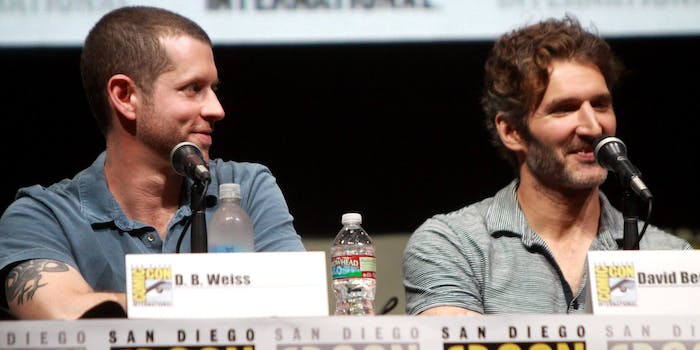 A lot of people will be happy with this decision.

Former Game of Thrones showrunners David Benioff and D.B. Weiss have stepped down from making a Star Wars trilogy. They were hired last February to write and produce three new films beginning in 2022, following the conclusion of the Skywalker Saga.

Benioff and Weiss were a controversial choice due to the widespread criticism of their work on Game of Thrones, and some fans were actively hoping their Star Wars trilogy would never come to fruition. In a statement published by the Hollywood Reporter, Benioff and Weiss said:

“We love Star Wars. When George Lucas built it, he built us too. Getting to talk about Star Wars with him and the current Star Wars team was the thrill of a lifetime, and we will always be indebted to the saga that changed everything. But there are only so many hours in the day, and we felt we could not do justice to both Star Wars and our Netflix projects. So we are regretfully stepping away.”

They signed a $250 million deal with Netflix in August, contracted to develop new original projects with the streaming service. This did indeed provoke questions about their Star Wars trilogy, and how the two sets of projects would fit into their schedule. However, there will inevitably be speculation that Benioff and Weiss left Star Wars for other reasons. After all, Star Wars producer Kathleen Kennedy has never been shy about firing writers and directors who weren’t up to scratch, some notorious examples being Colin Trevorrow, and original Solo directors Phil Lord and Chris Miller.

But for now, their departure is explicitly being described as a mutual choice to leave, with Kennedy telling THR: “David Benioff and Dan Weiss are incredible storytellers. We hope to include them in the journey forward when they are able to step away from their busy schedule to focus on Star Wars.”

While Game of Thrones was a huge hit, Benioff and Weiss have been criticized for the quality of their writing, their divisive attitude to fandom, and the often racist or sexist content of Game of Thrones—which was reflected by their unwillingness to hire women and people of color behind the scenes. Just this week, a Weiss/Benioff interview went viral due to their open admissions of incompetence behind the scenes, ranging from basic writing and production errors corrected by less-famous collaborators, to their choice to leave a baby on a block of ice while filming. They’re basically the poster boys for dubiously qualified white guys who get to work on high-profile projects while more talented and professional women and minority filmmakers are sidelined.

The future of the Star Wars franchise is clearly in flux right now. The Rise of Skywalker ends the central story arc this year, leaving the field open for new material. Disney is launching new TV shows on Disney+, but we’re unlikely to see more spinoffs like Rogue One anytime soon. The Last Jedi writer/director Rian Johnson is still on to create a new trilogy in a few years, but details are still under wraps.