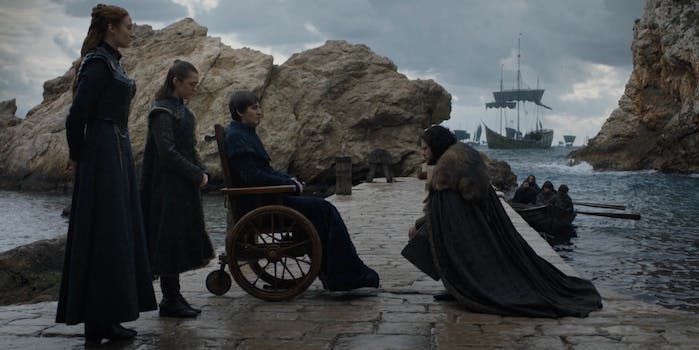 ‘Game of Thrones’ fandom thrived not because of the show’s masterminds, but in spite of them

Fans are scrutinizing the showrunners after their comments about making the 'Game of Thrones' pilot went viral.

Game of Thrones showrunners David Benioff and D.B. Weiss emerged for a rare conversation about the series at the Austin Film Festival over the weekend.

The conversation, which took place Saturday afternoon and was live-tweeted by Twitter user @ForArya, was advertised as an “in-depth look into the process of adapting George R. R. Martin’s bestselling books into the epic HBO series that changed the landscape of modern television.” And the 75-minute conversation certainly did that as Benioff and Weiss—who’ve done very few interviews or public appearances since Game of Thrones ended nearly six months ago—answered questions about their successes and failures (including their infamous “piece of shit pilot”) along the way.

It was certainly illuminating and it went about as well as you’d expect: it sparked debates about white male privilege, falling upwards as inexperienced writers in Hollywood, a possible lack of understanding over the source material they adapted into a TV show, and even more regurgitations about their effectiveness as writers and showrunners. And the internet has been dissecting it and ripping Benioff and Weiss new ones ever since.

If you’ve kept up with interviews from Benioff and Weiss over the years, not much about what they revealed at the Austin Film Festival was much of a surprise. They had zero experience running a TV show, something they openly admitted to before. They made rookie mistakes and tried to loop in too much of Martin’s prose, they tried to take on too much of the workload themselves, and the original pilot was so bad that Benioff and Weiss’ friends had no idea what was going on and they ultimately reshot most of it and recast two major roles. (The Unofficial Guide to Game of Thrones has an entire chapter on the original pilot that covers what went wrong in more detail.)

What @ForArya’s thread does is distill a lot of what Benioff and Weiss have already discussed in one place. It also gets to the heart of why, in their own words, Benioff and Weiss’ massive success is something that might have only happened to them. And you can sum a lot of it up with one tweet.

Dan is saying that #GameofThrones was basically an expensive film school for he and Dave. For example, they had no idea how to work with costume designers, and it was a huge learning experience.

Before they adapted Game of Thrones, Benioff and Weiss were both published authors, and Benioff had written a handful of feature-length screenplays including adapting his own novel 25th Hour into a film. Neither of them had ever written an episode of television or run a television show before. And as first-time showrunners of a series on a massive scale even back then, they had a lot of learning to do.

And that they did, becoming more confident as the series went on. Over their eight-season run, they’ve written monumental episodes of television, brought their audience to their knees with gut-wrenching episodes, and helped push forward a worldwide phenomenon.

What’s so frustrating about Benioff and Weiss’ lack of pre-Thrones experience isn’t necessarily how they came into a position where Martin trusted them to adapt A Song of Ice and Fire into a TV series; they famously earned his trust during their initial meeting after correctly guessing the identity of Jon Snow’s mother. It wasn’t that Benioff and Weiss called their pitch to HBO “basically a con job” and downplayed its fantasy elements to sell the show to executives they’d hoped hadn’t read the source material. (Although you can certainly find people outraged specifically by those elements.) It’s the fact that HBO gave Benioff and Weiss the opportunity to make a show, fuck up, try again, and figure it out along the way when that was simply an opportunity that creators who weren’t white men would never be offered. It’s an opportunity that few marginalized creators would be offered today.

What the FUCK? What the entire fuck? The number of women and POC who work and work and work and never get a break this big but for these mediocre mayo men it was "an expensive film school"???? I hate everything about the entertainment industry now.#GameOfThrones https://t.co/RpNDi4GXVc

They also revealed that initially insisted on writing everything themselves, which turned out to be impossible, before allowing their assistant Bryan Cogman to write four episodes. Although they never had a traditional writer’s room, they eventually expanded the number of writers who penned episodes on the show to seven, which included themselves, Cogman, Martin, Dave Hill, Vanessa Taylor, and Jane Espenson (who wrote the teleplay for a single season 1 episode).

The majority of the writers on the show were white men, and a woman did not write an episode of Game of Thrones after season 3. But when asked about not hiring more women or people of color to write episodes, they pointed to Hill as someone who was “of Asian descent” and noted that they didn’t hire writers “unless they were willing to be part of the production team.” Hill, like Cogman, started out as in an assistant role before being given the chance to write an episode of Game of Thrones.

He said that they wouldn’t hire writers unless they were willing to be part of the production team.

(Vanessa wrote the Shape of Water.)

Were other women and writers of color offered the chance to write on Game of Thrones, only to have to walk away when they didn’t join the production? We don’t know. In @ForArya’s thread, Benioff and Weiss didn’t elaborate on if those opportunities were offered to other writers, only name-checking Taylor, who left Game of Thrones to work on The Shape of Water.

Fortunately for Benioff, Weiss, and for the viewers, so much of what made Game of Thrones great went beyond them: a cast who were in-tune with their characters, incredible shooting locations, costumes that could bring entire storylines to life, and a much-revered starting off point.

A fantasy show that isn’t a ‘fantasy’ show

Benioff and Weiss also spoke about wanting to downplay Game of Thrones’ many fantasy elements when they first started working on Game of Thrones. They wanted to make a TV show that non-fantasy fans would watch, citing “mothers, NFL players” as two subsets they wanted to dupe into watching a fantasy show.

Dan wanted to remove as many fantasy elements as possible bc “we didn’t just want to appeal to that type of fan.” They wanted to expand the fan base to people beyond the fantasy fan base to “mothers, NFL players”…

In that sense, they were wildly successful. People who normally wouldn’t watch fantasy shows or films were really into Game of Thrones, and one of those NFL players did make a cameo in season 8. But It’s also an insulting way to look at your audience. Seeing its fantasy elements as something to shy away from a storytelling standpoint—it made sense from a business perspective—shows that Benioff and Weiss (the former who once said that “Themes are for eighth-grade book reports”) misunderstands a lot of what drew people to ASOIAF, which was already a popular fantasy series at the time, in the first place. Like any major series with so many fans that universal praise is all but impossible, there are countless elements that enticed people to start watching. Its fantasy appeal is just one of them.

As we’re already seeing with the many copycat series to emerge from Game of Thrones’ shadow, if you don’t have the characters to become emotionally invested in, the show won’t work. Game of Thrones had that in spades.

Fandom and a galaxy-wide question

We can rehash the end of Game of Thrones and debate the validity of the Emmys the final season won all we want until we’re blue in the face. It won’t change the fact that Dany died, Bran became king (with Tyrion as his Hand), and an exiled Jon wandered off beyond the Wall with Tormund Giantsbane and Ghost by his side.

So when criticism about Benioff and Weiss arises, their Game of Thrones run is often brought up amidst discussion about the $200 million Netflix deal they signed or their upcoming Star Wars trilogy. Questions arise about their lack of experience outside of Game of Thrones, the ill-conceived and now-dead Confederate series greenlit at HBO, the lack of diversity behind-the-scenes on Game of Thrones, you name it.

That’s nothing new, of course. They’ve had a sometimes antagonistic relationship with Game of Thrones fans well before the series ended, and even more so afterward. (And Benioff and Weiss have every right to not engage with feedback and criticism.) The fandom flourished over the years as viewers dissected the books and the series down to their core, became attached to characters, mythology, plot, and world-building. The fandom looks much differently post-series finale no matter how you felt about it, and the ill-will it brought to some parts of the fandom haven’t helped. (Although it’s far from the first property where its creator has caused rifts in the fandom.) If Game of Thrones endures as a fandom, it’s in spite of the men who made it, not because of them. In the grand scheme of things, Benioff and Weiss were just two people out of thousands who made Game of Thrones possible.

If nothing else, their talk at the Austin Film Festival is a reminder that Benioff and Weiss, who heralded the most popular show in the world, are simply human. Flawed and extremely privileged humans who won the television lottery, but human all the same.