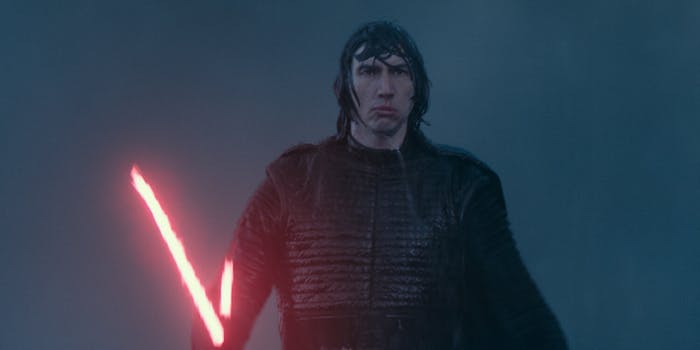 The Rise of Skywalker/Star Wars (CC-BY)

Wet Kylo Ren may turn everyone to the dark side

It's the stand-out meme from the new trailer.

The image of Kylo Ren soaking wet was reminiscent of scenes in romantic comedies.

Like Colin Firth’s Mr. Darcy in the BBC’s Pride and Prejudice.

I'm doubling down on the Mr Darcy shtick and hoping it works pic.twitter.com/bmDM6dklBd

One again Mr Darcy and Kylo Ren are the same person #TheRiseOfSkywalker pic.twitter.com/5P29Jm5kFR

And Ryan Gosling in The Notebook.

“It wasn’t over. It STILL isn’t over!” pic.twitter.com/fhm9yVMDsm

4 years of being a kylo ren stan and i finally gets my rights with this pic.twitter.com/EHVTYAX6gg

Kylo Ren has inspired memes since his first appearance in a Star Wars film. The emo-like character, with his all-black ensembles and sullen expression, is an all-too-perfect fit for online fandoms. People also just really like Driver as an actor. So Kylo Ren will likely become the most-memed character in The Rise of Skywalker. Whether his drenched, brooding scene is a hint that Kylo Ren will eventually become good—or a romantic prospect for someone—is yet to be determined. We’ll have to wait until December to find out.

If you want to watch the full scene, it’s about 45 seconds into the trailer.