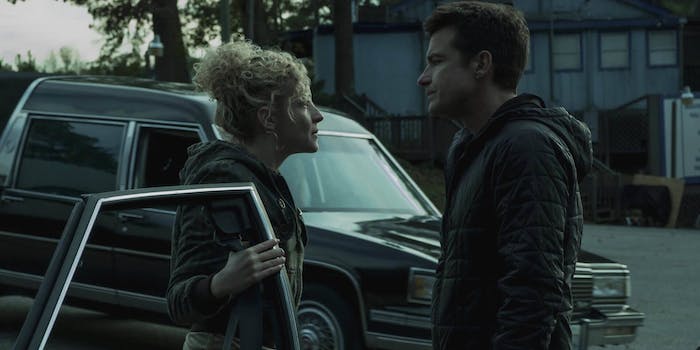 A small-scale family drama defeated the big-budget spectacle of 'Game of Thrones.'

The Emmy Awards are a useful way to take the pulse of the TV industry, and it’s always interesting to see where the awards diverge slightly from the pop-culture zeitgeist. This year, that came in the form of Ozark‘s two Emmy wins.

Netflix‘s Ozark stars Jason Bateman as a man who moves his family to from an affluent urban life to the Ozark Mountains in Missouri, where he runs a money-laundering operation for a drug cartel. It’s a crime drama whose reviews are above average but hardly glowing: 59% on Metacritic during season 2, for what that’s worth. And unlike Fleabag, Succession, Chernobyl, Game of Thrones, or Russian Doll, it’s not a show that people namecheck when discussing the TV zeitgeist of 2019. Yet it won in two major Emmy categories, suggesting that either we all ought to revisit Ozark, or as always, there’s a slight divide between Emmy voters and TV critics.

Nominated in five categories, Ozark won for outstanding supporting actress in a drama series (Julia Garner) and outstanding directing for a drama series (Jason Bateman). It’s an interesting result because many people were expecting the more high-profile Game of Thrones to win in both categories. Game of Thrones had three episodes nominated for direction, alongside one each for Ozark, The Handmaid’s Tale, Killing Eve, and Succession. Meanwhile, the supporting actress category was dominated by Game of Thrones stars: Maisie Williams, Sophie Turner, Lena Headey, and Gwendoline Christie, alongside Ozark‘s Julie Garner, and Fiona Shaw in Killing Eve.

Considering the number of Game of Thrones nominations competing against each other, you have to wonder if HBO played itself and split the vote. This is actually why Gwendoline Christie and Alfie Allen famously submitted themselves for consideration, while others like Lena Headey were submitted officially by HBO. Shows with ensemble casts typically narrow down a couple of choices to submit for nomination, because if you put everyone forward, they may wind up competing with each other. That’s what happened here. If you’re an Emmy voter who loved Game of Thrones, you had to pick between four well-known actresses and three episodes of the show’s final season. Meanwhile Ozark put forward one clear choice in each category, and ultimately won the day.

Game of Thrones is often discussed in terms of scale, with episodes offering blockbuster-sized battle scenes, special effects, and massive ensemble casts. Meanwhile an Ozark director has a very different kind of job, focusing on intimate emotional moments in a real-world drama. Basically, this Emmy win also reminds us that size isn’t everything, and sincere emotional stories can still win against big-budget spectacle.