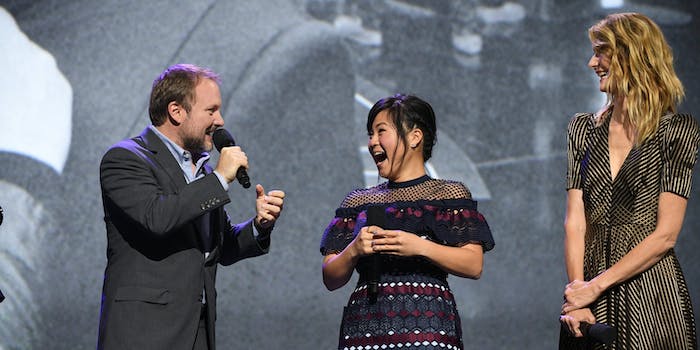 He'll also write and direct the first installment in the trilogy.

Johnson, whose Star Wars movie won’t be released in theaters until next month, will also write and direct the first installment of that trilogy. Ram Bergman, Johnson’s longtime collaborator, will produce the film.

Not much is known about the film, but Lucasfilm notes that Johnson’s trilogy will be “separate from the episodic Skywalker saga” and that he will “introduce new characters from a corner of the galaxy that Star Wars lore has never before explored.”

“We all loved working with Rian on The Last Jedi,” Lucasfilm president Kathleen Kennedy said in a statement. “He’s a creative force, and watching him craft The Last Jedi from start to finish was one of the great joys of my career. Rian will do amazing things with the blank canvas of this new trilogy.”

Starting with 2015’s The Force Awakens, Lucasfilm planned to release a new Star Wars movie every year with a brand new trilogy featuring original stars Mark Hamill, Carrie Fisher, and Harrison Ford and standalone anthology films. Until now, nothing had been set in stone after Episode IX in 2019 and a standalone Star Wars film set for 2020 that some believe will be about Obi-Wan Kenobi. News of the new trilogy indicates that Lucasfilm plans to continue expanding the Star Wars universe long after the stars of The Force Awakens, The Last Jedi, and Episode IX hang up their blasters and lightsabers. The move also broadcasts the amount of confidence the studio has in Johnson.

Although recent reports following the firing of original Solo directors Chris Miller and Phil Lord and Episode IX’s Colin Trevorrow suggested creative clashes behind the scenes, Johnson and Bergman had nothing but praise for the process.

“We had the time of our lives collaborating with Lucasfilm and Disney on The Last Jedi,” Johnson and Bergman said. “Star Wars is the greatest modern mythology and we feel very lucky to have contributed to it. We can’t wait to continue with this new series of films.”

While Johnson’s trilogy will involve new characters and creatures, Lucasfilm made a shoutout to one of Johnson’s contributions to Star Wars lore in its release, noting that “no porgs were available for comment.”