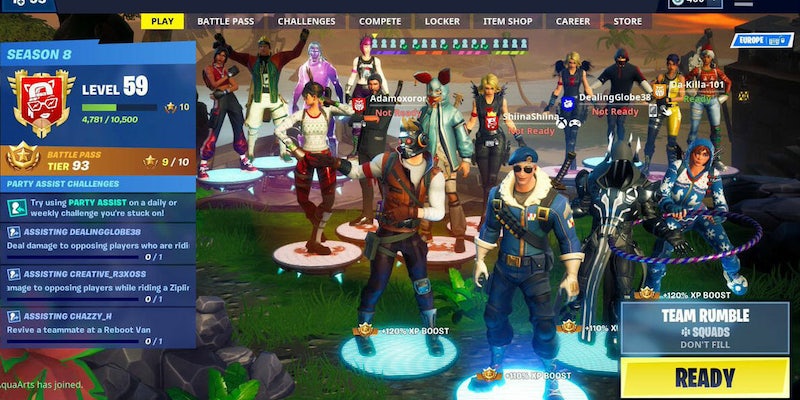 How to make a 16-player lobby in Fortnite

Drop with more friends than ever before.

The Avengers are all about epic team-ups, so it only makes sense that Fortnite has added the ability to make your own supergroup. With the arrival of the Avengers: Endgame crossover LTM (limited time mode), Fortnite players can now make 16-player lobbies so you can keep the entire team together during huge battles. Here’s how to assemble your 16-player crew.

How to make a 16-player Fortnite group

From the lobby menu in Fortnite, look down and you’ll notice a new button that says “squad formation.” Here you’ll see four squad formations, including the 4-player Llama Squad, the 8-player Crab Squad, the 12-player Bear Squad, and the 16-player Dragon Squad. You don’t need the full amount of players to reach each tier. You just have to have at least enough players to fill the previous squad and then one more player to push you over.

So just go ahead and keep inviting people to your squad via the invite button in the top left of the lobby menu. Things will probably get a little hectic, especially if you have voice chat on, but then you’ll be able to switch squad positions around from the formation menu.

What Fortnite modes work with 16 players?

Any mode that typically allows you to play in groups of more than four will work with 16 player groups. Here’s a list of everything that should work:

Keep in mind that these modes come and go as Epic Games’ pleases, so not all of these will always be available. Currently, we have the Avengers-inspired Endgame mode, and we’ll probably always have the 50 vs. 50 Team Rumble mode, but Epic likes to add limited-time events during each new season, so you can bet there will be more down the road.