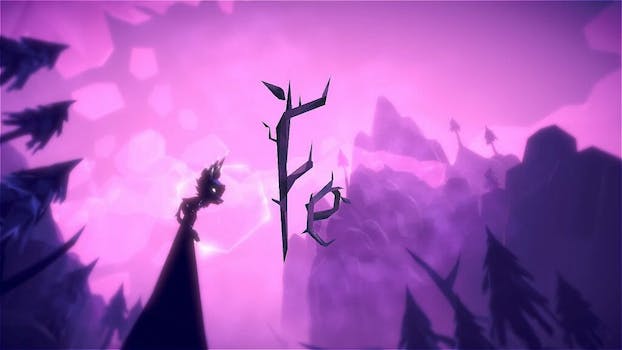 This indie game tells a mysterious tale and connects players to the natural world.

Fe wants you to feel confused.

The latest game out of Electronic Arts’ “Originals” initiative is an evocative indie from Zoink Games. Set in a mystical forest aglow with strange wildlife, Fe is a puzzle-platformer that offers little setup in the realm of controls or story. When first starting the game, players are asked to sit through a lengthy cutscene introducing the colorful world. Then you take control of the foxlike protagonist named Fe with no clear direction of what you should be doing.

With no spoken dialogue and very few on-screen prompts, you might get lost among the vibrant neon trees. Many of the opening areas look similar, and it’s easy to get turned around. But patience and experimentation are rewarded in spades, with a new discovery almost always hidden nearby.

Fe’s primary mechanic for interacting with the world is to sing. Players control the pitch of the creature’s howl and, by doing so, interact with the world at large. It’s this harmonious side of the game that makes Fe something worth paying attention to. Through song, the player character and other wildlife, plants, and hidden ruins form a symbiotic bond. You might find yourself calming an upset deer to ride on its back or summoning a bird that points to the next objective.

Thankfully, the sound design is stellar on all fronts. Fe’s singing is distinctive enough that the core mechanic functions brilliantly, while melancholic violins score the somber sea of trees. Many of the creatures you’ll encounter bear similarities to those of the real world. Ethereal deer and owls inhabit the forest to teach new abilities. By singing in harmony with these animals, Fe can learn to climb trees or glide from dizzying heights. The progression of the player’s abilities is fueled by finding common ground with the larger world.

If anything is frustrating about the song-based interactions, it’s that it can be hard to tell when best to engage. Most objects and animals you encounter glow with a strange energy, and sometimes this means they are friendly, while other times it can lead to a quick death.

Navigating the glowing forest follows the same pattern because of so many identical twists and turns. There are also some frustrating stealth sections, where you hop between patches of glowing grass to avoid detection. While at first it seems that you can blaze your own trail forward, it quickly becomes clear that a linear progression is the only way to advance.

As far as the story goes, Fe remains obtuse for the course of the eight-hour duration. There is some kind of invasion taking place, with silent, alien figures crawling through the woods. These invaders go around capturing some of the creatures that Fe has allied with, and they seem to destroy everything in their path. Watching the wildlife suffer provides enough motivation for the player to feel invested in the journey, but a lack of context does make it harder to appreciate the game’s overall narrative structure.

Hieroglyphics and stone tablets are scattered throughout the world to lend a sense of clarity to the backstory. Fe’s forest world doesn’t need any help to feel more alive, but these little hints are a tantalizing glimpse past the ambiguity of the plot. Wandering through the world is serene, with plenty of songs to learn and hidden collectibles to uncover. Fe’s greatest strengths are in art design and presentation, which conjure memories of Journey and Shadow of the Colossus during key moments.

A lack of polish does frustrate in some areas. Characters can clip through environments, the camera controls are imprecise, and there are some small framerate drops. It would be nice to see these issues smoothed out, but overall Fe is delightful to play.

Learning new skills to make flowers bloom or glowing pathways open up is exciting every time, and truly unpredictable in the course of the main objective. When Fe presents you with a problem, your first, or even second idea to get past it probably won’t work. Instead, the game encourages you to seek out help, and better yourself and the world around you before you can continue. The experience is meditative and relaxing, with no real combat, and Fe feels unlike anything else because of it.

Fe is available now for PC, PS4, Switch, and Xbox One.

Disclosure: This review was written based on a Nintendo Switch version of the game provided by the developer.