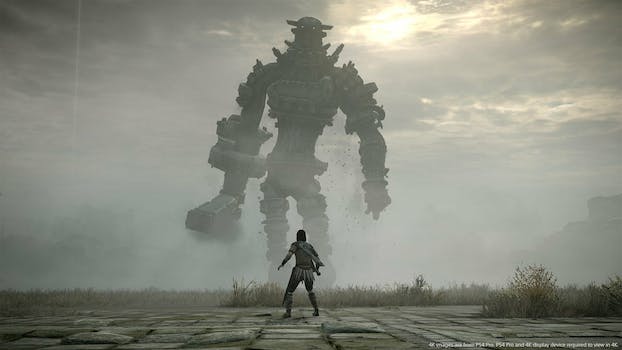 Meet the new towering titans of Shadow of the Colossus

The addition of photo mode alone makes it worth revisiting one of the best games of all time.

The ground shakes. Evenly spaced tremors in the distance make it feel as if the mountains themselves are moving. But this is no earthquake. Just over the hills, a massive beast lumbers listlessly, its arms intimidating towers. As it approaches, I prepare to mount its back and deliberately make my way up its armored spine. Though I have felled this creature half a dozen times in the past, something about this encounter feels unfamiliar.

Playing Shadow of the Colossus for the first time is a memorable experience: Few other games approach the sense of awe and majesty conjured by Team Ico’s monster-hunting masterpiece from the PS2. In a new remake for the PS4, players can relive that unique experience with enriched character models and updated camera controls.

Many players haven’t played Shadow of the Colossus just once. This is the kind of game that challenges players to learn every secret of its atmosphere, to study the behavior of each enemy, to find the most efficient path to the finale. It’s the rare game that could be played through annually without losing any of its original magic. Nearly every frame of the original is evocative of a forgone fantasy land fallen into ruin, filled with world-building clues at every turn.

Though it was originally released in 2005, an HD update in 2011 brought the evocative work in front of a new audience on the PS3. This year’s PS4 update, however, is a complete and total remake of Shadow of the Colossus—not just a graphical overhaul of the world and character models, but a complete rebuild from the ground up. As with any remake of a universally acclaimed classic, many doubted the pressing need to revisit what has already been hailed as one of the finest games ever made. But this Shadow of the Colossus changes enough to warrant a return, and it will certainly capture the heart of anyone playing for the first time, too.

For the uninitiated, the story begins in medias res, with a boy on horseback carrying the body of a young girl through a foreboding landscape. We aren’t given names for these characters, nor context for their relationship, but the journey’s purpose is clear and their trek is arduous. Moments like this are common throughout the game, with long stretches of silence that encourage absolute immersion and force the player to reflect on the world around them.

In 2005, Shadow of the Colossus’ visual style was praised as the most innovative of its time, unparalleled by any standard. The richness of every environment, coupled with the scale of each colossus, made for an experience unlike anything that had come before it. In 2018, though the original shows its age, it hasn’t lost any of that evocative magic.

Trying to make the game more beautiful could have been a mistake. By fleshing out every detail of the world, a piece of the cryptic cohesion could have been lost. It’s true that the rocks, water, and moldered temples of the forbidden land now look undeniably lifelike, but the fantastical elements have come away the most transformed.

Faraway vistas originally looked formless due to a coupling of artistic vision and technical limitation. Without Fumito Ueda’s direct oversight and with the PS4 Pro’s 4K capabilities, Bluepoint Games was able to eschew both halves of that equation for this new version. What this means is that while the new Shadow of the Colossus is more impressive, it can’t help feeling less expressive. The moody, atmospheric clouds of fog and dust that initially hid areas that couldn’t be rendered have been replaced by a clearer view… of expansive, empty spaces. Likewise, some nearly blinding blooms of light have been removed to grant clarity on key characters’ faces and bodies, showing emotion where before there was only imagination. The visuals of Shadow of the Colossus aren’t ruined by their immediate uptick, but some of their power has been weakened, akin to revisiting a childhood dream.

If the scenery is slightly debased by the remake, the beasts that lurk within certainly are not. The towering titans that make up the course of players’ progression are as stunning as ever to behold, with glowing eyes and immense physicality. Each colossus breathes sheer scale with its new model, making it feel like a task to topple every one, no matter how many times you have played Shadow of the Colossus before. The updated camera controls make it easy to track every inch of your opponent before you make your approach, if only to relish in their grandeur.

And the best tool in player’s kit this time is the added Photo Mode. With the press of a single button, an easy-to-manage UI appears on screen, packed with filters, sliders, and preset styles to experiment with. Just having this at your disposal turns every second of Shadow of the Colossus into an opportunity to lose 20 minutes tinkering with the best way to capture whatever gorgeous imagery is on screen. Though many modern games use similar mechanics to help players share screens of their accomplishments and discoveries, this inclusion feels more meaningful for a cult classic filled with incredible visuals.

Climbing up the back of a colossus, lost in a swath of swaying fur or peering down from death-defying heights, one feels a natural inclination to capture that moment for posterity. Now that Shadow of the Colossus grants players the opportunity to do so, it inherently deepens the relationship forming between the character and the monster, as well as the player and the world. Every actor is essential in this scenario, and knowing the inevitable outcome of Shadow of the Colossus, these moments of gratitude are eerily thematic.

While this PS4 remake might not be the best way ever to experience Team Ico’s timeless classic, it offers players old and new an experience that simply can’t be replicated anywhere else.

This review was published based on a digital copy of the game provided by the publisher. Shadow of the Colossus is available for the PlayStation 4 on Feb. 6.