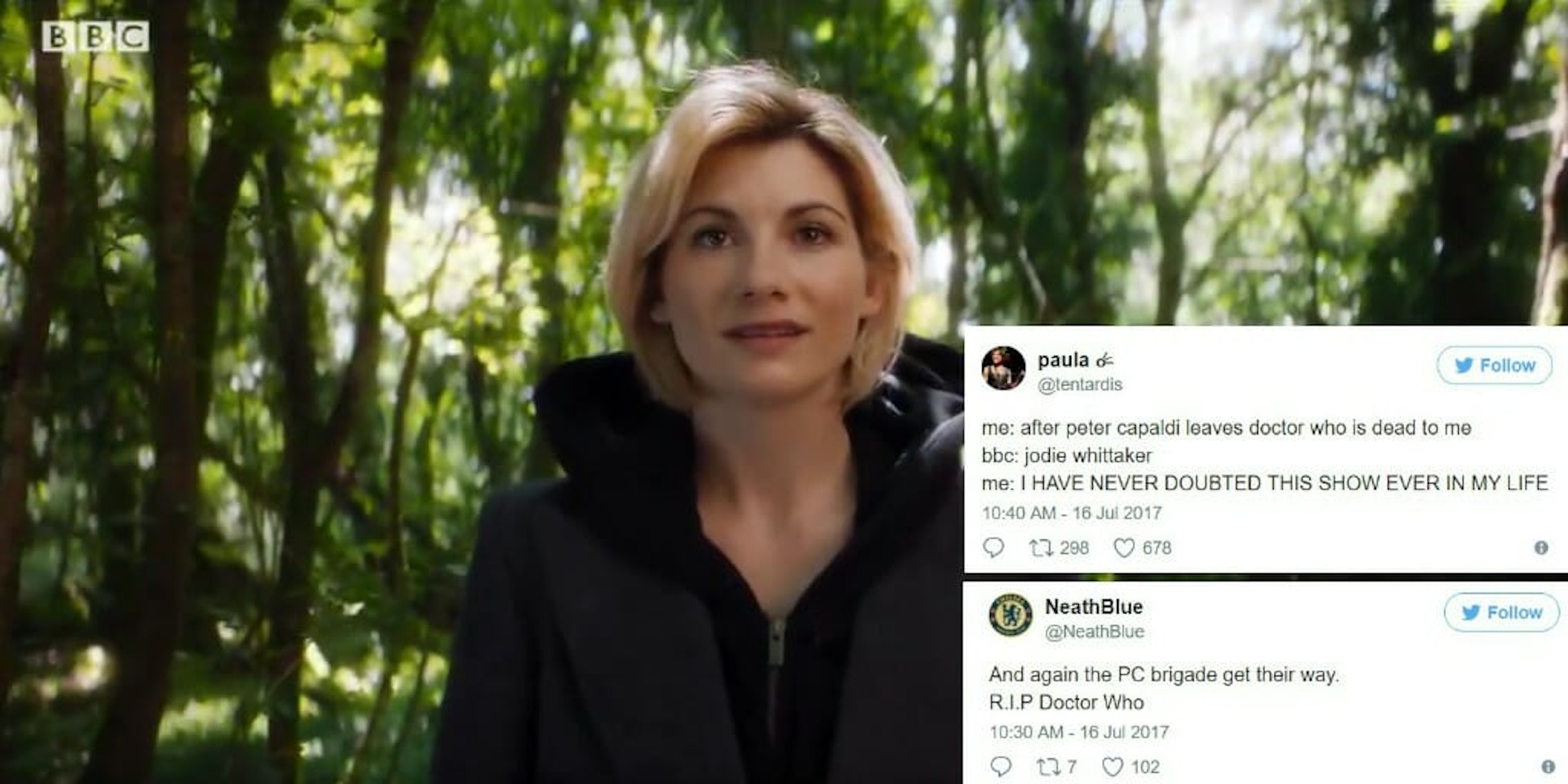 Screengrab via Doctor Who Official/Twitter

‘Doctor Who’ fans react to Jodie Whittaker as the new Doctor

Jodie Whittaker has been revealed to the world as the new Doctor Who, the latest star of the popular, long-running British sci-fi series. The news Sunday set off a flood of reactions on social media due to the massive global popularity of the show and because of the history that had been made.

Whittaker will be the first woman to ever hold the show’s title role, and that fact was not lost on most everybody who responded to the news.

What does it feel like to be the Thirteenth Doctor?
Jodie Whittaker: "It’s very nerve-racking, as it’s been so secret!"

As such, many people were delighted to see this barrier broken. In recent years, some fans have criticized the show―and more specifically, outgoing showrunner Steven Moffat―for exclusively casting white men as the iconic Doctor. Now it’s officially no longer the case that only men get to be Doctor Who.

Congrats Jodie Whittaker. A wonderful actress who will inspire millions of young women (and show them that they can save the world too) https://t.co/TeLURXKtBr

me: after peter capaldi leaves doctor who is dead to me
bbc: jodie whittaker
me: I HAVE NEVER DOUBTED THIS SHOW EVER IN MY LIFE

Maybe, just maybe, #jodiewhittaker was the best actor for the job. #DoctorWho13 pic.twitter.com/z17nlZhmU6

When I was a kid watching Doctor Who, I'd have considered this a betrayal of the show, because I was a child & my brain wasn't fully formed. https://t.co/v0csqOF9sm

I couldn't be prouder of #DoctorWho today. A whole generation of young girls are going to grow up with the Doctor as their hero. I'm cry.

Terrific news! And about time. A new dawn. Congratulations to the excellent Jodie Whittaker. Here we go again…! #DoctorWho

Some people, however, were decidedly unhappy with the news, blaming the casting of Whittaker on “political correctness” and accusing it of betraying the original show.

Doctor Who has officially "Jumped the Shark". I hope the new viewers will make up for those of us leaving the program. Classic Who for me.

And again the PC brigade get their way.
R.I.P Doctor Who

So the BBC has pandered to all the PC twats who insisted Dr Who should be a woman. What crap! #DoctorWho

That negative reaction hasn’t seemed to dampen the enthusiasm of fans who’re stoked for Whittaker’s casting, however. To the contrary, the fact that some people are bothered by Whittaker landing the role seems to have only increased the levels of schadenfreude on the part of her supporters.

I’ve never seen Doctor Who, but I’m a big fan of anything that causes sexist idiots to tell on themselves.

Whittaker will be the 13th actor to portray the time-traveling Doctor since the show first aired in 1963—and the fifth Doctor since the series returned to the airwaves in 2005. She’s had a successful career in British film and TV to date, including her role as Beth Latimer on the popular detective series Broadchurch, in which she co-starred alongside David Tennant, himself a former Doctor.

In keeping with custom, it’s expected that Whittaker’s first appearance as the Doctor will occur in the series’ 2017 Christmas special, and her first season in the role will begin in earnest sometime in 2018.